Savant UK correspondent Lee Broughton analyzes one of his favorite pictures starring Stacy Keach, who seemed to make only cult items in the ’70s and ’80s. William Peter Blatty dishes out a thick mix of comedy and dark soul-searching about the human condition as a Caligari- insane asylum, but with new twists. 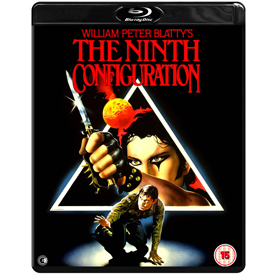 (Note: Savant reviews as a guest at TFH. Here I stretch my prerogatives by presenting a review from Lee Broughton, a valued U.K. colleague who has been contributing to DVD Savant for sixteen years now. So please consider Lee as a guest reviewer for a guest reviewer.)

At the time of its release, William Peter Blatty’s The Ninth Configuration was a film out of time. Its unusual narrative, its use of unannounced flashbacks and dream imagery and its atypical cast of characters all belonged to the kind of adventurous American filmmaking practice that we now associate almost exclusively with the “New Hollywood” period of the late 1960s and early 1970s. Furthermore, the film’s poignant and emotionally charged storyline – which involves a selfless individual earnestly revealing his love for his fellow man as he goes about assisting those in need of his help and support – was completely at odds with the mood of the decade that it was belatedly released in: the 1980s were a time when public displays of greed, selfishness and self aggrandisement were the order of the day for many. The Ninth Configuration could have been the last great American movie of the 1970s. Instead, it became the first lost American film of the 1980s.

Synopsis: In the Pacific Northwest of America an imposing Gothic castle is being used as a special psychiatric hospital, housing mentally disturbed military personnel. A brilliant but unorthodox psychiatrist, Colonel Hudson Kane (Stacy Keach), is posted there with orders to determine the true origins of the inmates’ mental breakdowns. Assisted by the Medical Officer Colonel Fell (Ed Flanders), Kane strikes up a rapport with Captain Cutshaw (Scott Wilson), an astronaut whose sudden and unexplained psychosis resulted in him aborting a mission to the Moon. A series of intense philosophical and theological debates take place between the devoutly religious Kane and the determinedly atheistic Cutshaw but Cutshaw remains a disruptive influence on the other inmates.

As a result progress in terms of determining how Cutshaw and the others might be helped is slow and is possibly even hampered by Kane’s personal struggle with his own inner demons: his sleep is disturbed by a recurring nightmare, the content of which was originally imparted to him by his late brother, a legendary Marine whose exploits earned him the moniker “Killer” Kane. In a bold attempt to break the impasse, Kane agrees to completely indulge the eccentric whims of his patients. And if this approach should fail, he has resigned himself to employing enforced shock treatment. But just what kind of shock treatment would be needed to jolt these men back to reality?

The first half of The Ninth Configuration plays like a very intense and sometimes disturbing fusion of elements from Catch-22, M*A*S*H and One Flew Over The Cuckoo’s Nest. Certainly, our initial introduction to the inmates here is not particularly easy or pleasant viewing at times. The unofficial suggestion from the military is that these men are putting on an elaborate act, a la Corporal Klinger from M*A*S*H, in order to escape active duty.

The military may well have a point: Lieutenant Reno (Jason Miller) is rewriting and casting the works of Shakespeare for canine actors, Major Nammack (Moses Gunn) believes that he is Superman, Lieutenant Bennish (Robert Loggia) believes that he is a Space Marine who is being held captive by shape shifting Venusians, “Dr” Fromme (William Peter Blatty) thinks that he is the Medical Officer, and so on.

Then again, these men all seem genuinely disturbed, the likelihood being that something experienced in combat has pushed them over the edge. But if that is the case, what could possibly have turned the astronaut, Captain Cutshaw, into an individual who frequently flips from being a mischievous, Harpo Marx-like figure of fun into a manic and aggressive troublemaker whose actions might result in real harm being caused to someone?

When they are brought together, the inmates’ behaviour and interactions become a seemingly unending flurry of frenetic and bizarre activity: strange insubordinate rituals, like attending roll call in a circle instead of a line and, when finally in line, performing group sing-a-longs, acting out a “famous lines from famous movies” game and unleashing an absolute barrage of super fast one-liners, nonsensical observations and insults. These exchanges of dialogue are so fluid and well-timed that they must have been expertly rehearsed. But, by the same token, they are so intense and unrelenting that they run the risk of completely alienating the viewer.

Furthermore, little of the true nature and direction of the film is hinted at or revealed during its first couple of chapters, which might further alienate some viewers. However, those who stick with The Ninth Configuration for its first twenty minutes or so will soon become accustomed to the abrasive foibles of its main characters and in turn will find themselves gradually being drawn into a quite unique, imaginative and rewarding little psychodrama.

The The Ninth Configuration‘s off the wall and comedic wordplay – like its more straightforwardly dramatic dialogue – is extremely clever and well written. However, the potentially serious and disturbing nature of some of the inmates’ behaviour – and the dark mood and sense of foreboding that it casts over the castle and its inhabitants – makes finding a truly humorous reaction to their shenanigans a slightly uncomfortable prospect. If this is comedy, it is decidedly black in nature.

However, when Colonel Kane opens his heart to these men and gets a response, the atmosphere slowly but surely lightens a little and the hope is raised that the inmates can be helped. Indeed, periodic exterior shots of the castle seem to symbolically reflect the confusion and turmoil found within its walls: the castle is initially lost in the centre of a thick fog and then becomes tormented by a series of violent storms. Surely – with Kane’s help at hand – the sun is going to begin to shine through at some point?

The big question initially is whether the overly whacko behaviour that is on display here is just the inmates’ way of attempting to regain a degree of control in their lives while simultaneously finding a release for their inner frustrations. Or is it, by contrast, part of a more resolutely sinister agenda to deliberately confound and infuriate their officious military guardians? We’re never quite sure but the tension that this conundrum provokes – along with the suggestion that some of the more devious inmates may have formed a conspiratorial cabal that might be capable of effecting acts of harm against Kane – effectively imbues parts of The Ninth Configuration with the feel of a taught psychological thriller.

It’s hard to discuss the story arc of the second half of The Ninth Configuration without touching upon major spoilers. This is a highly original show and its narrative takes all manner of unexpected twists and turns – and presents some really effective shock revelations – as it winds its way to its devastating conclusion. Suffice to say that shock treatment does become necessary following the arrival of a new inmate who upsets Kane’s fragile relationship with the ever-volatile Cutshaw.

At a technical level The Ninth Configuration remains an impressive piece of filmmaking. Its framing is consistently inch-perfect and virtually every shot, no matter how cluttered or busy, is pleasingly well composed. There are some subtle but effective camera moves on display too.

The bizarre architecture of the exterior of the castle is mirrored inside thanks to some brilliantly executed art direction and set designs. Which in turn allows Blatty to use shots of weird archways, grand doorways, gargoyles, strange statues and religious artifacts to great effect. It’s not surprising to learn that Blatty’s cinematographer here, Gerry Fisher, had previously worked on another film set within the rambling confines of a bizarre Gothic mansion-cum-castle, Harry Kumel’s classic Euro fantasy, Malpertuis.

Similarly, the show’s acting is uniformly excellent. All of the familiar faces found among the inmates provide creditable performances while Neville Brand and Tom Atkins are totally convincing in their roles as austere military men. Special mention goes to Ed Flanders in his role as the pleasantly cynical but levelheaded Medical Officer, Colonel Fell.

Although Fell doesn’t fully understand Kane’s techniques or approach, he offers the Colonel his full support while simultaneously jabbing him with a series of Groucho Marx-style witticisms. But his emotional reaction when he finds out that his old pal “Killer” Kane is dead, and his moving explanation of what he personally hopes to gain from working in conjunction with an unorthodox operator like Colonel Hudson Kane are expertly delivered.

There are also fine performances from both Stacy Keach and Scott Wilson, who play off each other perfectly. Wilson provides intensely emotional and physical deliveries while Keach is purposefully controlled, subdued and – at times – completely distant. Their scenes are greatly enhanced by Barry DeVorzon’s beautiful music. His melancholy, piano-led melodies are particularly effective: reminiscent, in parts, of the equally effective music that John Barry provided for They Might Be Giants.

Second Sight have issued a commendable Region B Blu-ray of The Ninth Configuration here. It’s no secret that William Peter Blatty has returned to the film time and time again over the years in order to re-edit it and create a variety of alternate versions. Presumably this activity is reflected in the fluctuating picture quality found on this Blu-ray. By and large, the picture quality is “Very Good +” but the quality does dip to “Very Good -” for odd sequences. The presentation’s sound quality remains “Very Good” for the most part.

The disc’s interesting and informative audio commentary, which features William Peter Blatty and long time Blatty champion Mark Kermode, has been ported over from the earlier UK DVD release of the film from 2001. In this commentary track Blatty confesses that he has a mind to restore a further 20 minutes to the film at some point in the future but he obviously hasn’t done that as yet. An insight into the various cuts of the film that have been previously released, or may yet be released, can be found in the disc’s extra features section, which contains a good number of outtakes and deleted scenes. Kermode doesn’t appear to have had any input as far as this Blu-ray release goes, which is a shame given his consistent championing of the show for a number of years now, but his featurette from the earlier DVD is included here.

The disc’s newly created extras will be welcomed by anybody who has an interest in this intriguing film and its production history. They include new interviews with director William Peter Blatty, lead actor Stacy Keach, supporting actor Stephen Powers, the production designers William Malley and J. Dennis Washington and the soundtrack composer Barry DeVorzon. Of particular interest is the featurette titled ‘The Party Behind the Curtain’ (which is a reference to the show’s main shooting location in Budapest, Hungary). A mixture of new and archive interview footage illuminates the wild and devil-may-care approach to living and partying that had become a way of life for a number of the film’s key actors.