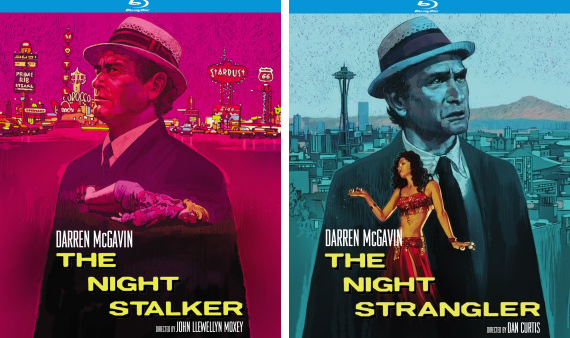 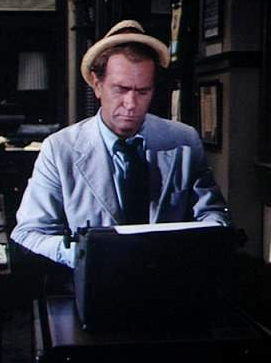 In January of 1972 ABC broadcast the story of a middle-aged newsman hot on the trail of a vampire seemingly escaped from a 50’s horror comic. The man and the monster had one thing in common – by the 70’s they were both anachronisms, adrift in an era of hot pants and roller disco.

Carl Kolchak, the overbearing reporter played by crusty TV vet Darren McGavin, was not simply immune to current fashions – his steadfast belief in the supernatural ensured his outsider status throughout two films and 20 hour-long episodes broadcast between 1974 and 1975.

The first of those movies was The Night Stalker, a nocturnal thriller animated by the lurid neon of the Vegas strip where a string of showgirl murders has stymied the police – Kolchak remains oblivious until he learns the victims have all been carefully drained of their blood. 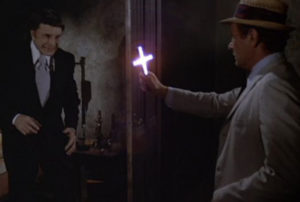 Based on an unpublished manuscript by Jeff Rice, producer Dan Curtis corralled Richard Matheson to write a screenplay so simple that it feels padded even in its thrifty 74 minute time slot yet Matheson, a wizard of pulp plot lines,  manages to contrive thrills more sensational than typical television fare and remain unscathed by the censors.

The vampire Janos Skorzeny (a perpetually snarling performance from Barry Atwater) typically preys on strippers and prostitutes and Kolchak’s erstwhile girlfriend (a laconic Carol Lynley) appears to be one or both – odds are she may be Skorzeny’s next victim.

Chivalry demands that the irascible newshound speed up his investigation and his lamp-lit showdown with Skorzeny (holed up in an improbably gothic Nevada mansion) packs an unexpectedly grisly punch (the bloodsucker keeps one victim attached to a transfusion bag for quick refills).

The director John Llewellyn Moxey had a knack for quirky horror fare (shepherding Christopher Lee through 1960’s moody witchcraft shocker The City of the Dead and the Edgar Wallace-inspired Circus of Fear) and he’s aided considerably by Bob Cobert’s red-blooded score, an unpredictable mix of brass, synth-funk and electronic whirs which just about defines the soundtracks of the 70’s.

Simon Oakland, the memorably smug psychologist who “explained” Norman Bates to Hitchcock’s frazzled audience at the end of Psycho, plays Kolchak’s beleaguered editor and reluctant partner-in-crime Tony Vincenzo, a role he would repeat in the film’s sequel, The Night Strangler. 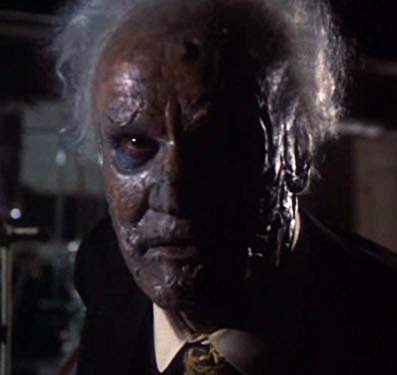 Curtis knew not to mess with success – the 1973 follow-up is very nearly a carbon copy of the remarkably popular original, reuniting McGavin, Oakland and Matheson while hewing close to the original’s template – tossed from his Vegas gig Kolchak lands on his feet in Washington state and immediately backs into another mystery with a supernatural culprit, an immortal killer played (against type) by television’s perennial nice guy Richard Anderson.

This time Curtis was at the helm and though the powerhouse producer could never be accused of subtlety, he knew which buttons to push, even though he was as overbearing a director as Kolchak was a reporter. The gaudy atmosphere of the Vegas settings gives way to The Night Strangler’s own eccentric locale, Seattle’s “Underground City” (the city’s streets were elevated in the 19th century leaving a skeletal framework of passageways beneath) – though the actual filming happened in L.A.’s Bradbury Building and at Universal. 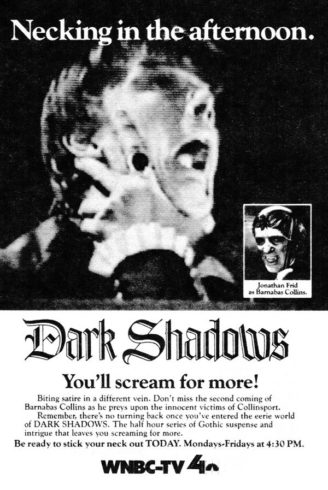 McGavin is once more cast in the improbable mold of a sometime ladies man – this time the lady being amiable Jo Ann Pflug (the big-hearted Lt. Dish of Altman’s MASH). And once again the killer’s victims seem to be mostly exotic dancers and hookers – a lazy, sexist conceit especially for 1973 – Kolchak is not the only anachronism on display.

Curtis created Dark Shadows in 1966 as a kind of garlic stalk to ward off the unnerving social changes of that era – or at least provide a temporary respite from the storm. An eccentric hybrid of As The World Turns and a Hammer film, the show appealed to a speciaized cadre of supernaturally inclined soap opera fans and monster-happy teenagers yet it thrived throughout those tumultuous times before closing up shop in 1971. 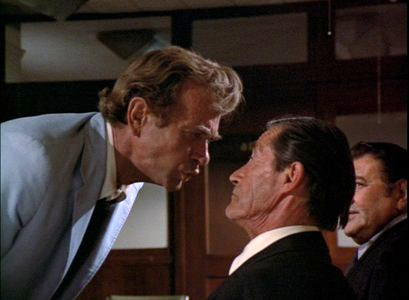 The producer’s longing for a non-existent past permeates Kochak’s adventures – beginning with the old school newsman himself, the supporting casts are crowded with Hollywood veterans like Ralph Meeker, Charles McGraw, John Carradine and even Margaret Hamilton – actors whose very presence stokes bittersweet memories of the world Kolchak – and Curtis – left behind.

The Night Strangler was nearly as successful as its predecessor leading to the short-lived TV series, a monster-of-the-week affair that was doomed by its repetitive format and a central character frozen in time.

Kino Lorber’s Blu ray editions feature fine transfers of Michel Hugo and Robert B. Hauser’s appropriately grungy 70’s era cinematography and they’ve put together some excellent supplements to round out the packages (including a winning interview with the hale and hearty 94-year-old Cobert). They are: