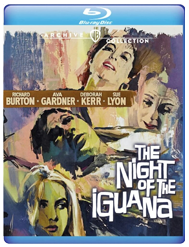 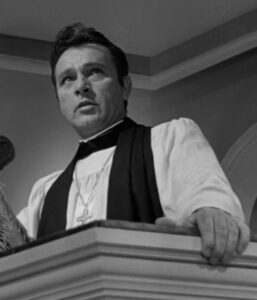 T. Lawrence Shannon looks more like a dock worker than a clergyman but to the women in his congregation he’s as soulful as one of Raphael’s angels. The problem is that this particular angel’s wings have been clipped. Shannon’s faith isn’t the only thing he’s struggling with; his wandering eye and freethinking ways suggest a reined-in version of Urbain Grandier, the randy minister of The Devils of Loudon. But where Grandier was unrepentant, Shannon is a walking guilt complex.

There’s a storm brewing this rainy Sunday morning and inside the church Shannon is doing his best to match it; his sermon begins in a reverent whisper but builds to a booming confession, “He that hath no rule over his own spirit is like a city that is broken down, and without walls.” Once finished flagellating himself, the minister turns on his flock and chases them out the chapel like barnyard chickens. Two years later he’s conducting bus tours in Puerto Vallarta, Mexico. 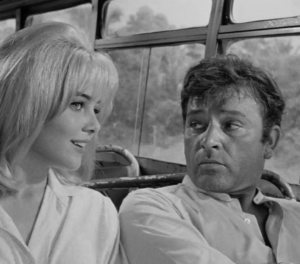 Shannon is played by Richard Burton who brings Shakespearean grandeur and a rogue’s charisma to John Huston’s The Night of the Iguana, an adaptation of the Tennessee Williams play first produced in 1959. The story of a down and out libertine with little impulse control, Shannon is like a male Candy Christian—the ladies are as moths to his flame, even if the flame is sputtering. His latest inadvertent seduction is the too-young Charlotte Goodall, a ticking time bomb in short shorts portrayed by Sue Lyon as an even sassier Lolita.

It’s not hard for the curvy little vixen to stand out from the other passengers on this tour bus, they’re a stereotypically dowdy crew of middle-aged aunties who Williams has penciled in for comic relief. Grayson Hall plays the leader of the pack and she might as well be wearing a leather jacket; her name is Judith Fellowes, a humorless martinet and Charlotte’s combination chaperone and secret admirer. In Shannon’s words, “Miss Fellowes is a highly moral person. If she ever recognized the truth about herself it would destroy her.” 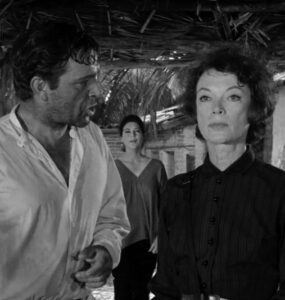 Fellowes has grown tired of Charlotte’s unsubtle advances to the preacher and she suspects Shannon has been reciprocating—she’s determined to get him fired, or better yet, locked up. In response Shannon hijacks the bus and its occupants and sets course for Mismaloya, a beautiful but isolated village south of Puerto Vallarta.

Shannon’s destination is an oceanside resort run by an old comrade, the recently widowed Maxine Faulk played by Ava Gardner. Once the cast is settled into their bungalows, Maxine’s beachfront hideaway transforms into an off-broadway stage where the actors lock horns in a series of soul-baring soliloquies. Like much of Tennessee Williams’s work, his monologues tend to reveal more about himself than the characters—the tortured preacher, the thwarted lesbian, and Maxine’s new tenants, Hannah Jelkes, an amateur artist played by Deborah Kerr, and her ancient grandfather, a poet named Nonno. 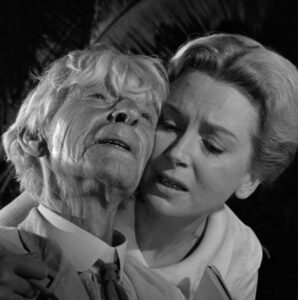 If Maxine embodies an earth-mother’s sensuality—a south of the border Molly Bloom—then Hannah is the empath of the bunch, a painfully self aware artist who takes the measure of a man by drawing him, as Shannon himself will find out. Hannah picks up spare change with her pad and pencil while Nonno completes his latest, and almost certainly final, poem. It ends with a stanza that would have fit in one of Shannon’s own sermons, “Oh courage could you not as well, select a second place to dwell, not only in that golden tree, but in the frightened heart of me?” 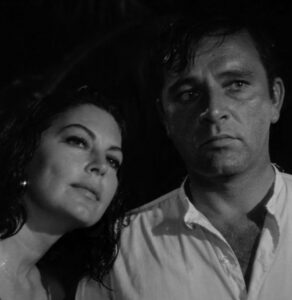 Williams’s rhetorical flights of fancy could sometimes land with a thud—but the man was a born entertainer: he was hilariously catty (his slicing and dicing of Miss Fellowes seems like a personal vendetta), and of course he wrote like an angel. Though not as funny and lowdown as Baby Doll, The Night of the Iguana prevails thanks to Burton’s performance as Shannon—a lost soul who learns to live with himself while not necessarily loving himself. Spending your days in the arms of Ava Gardner is a fair trade off, and it makes for an unexpectedly happy ending.

The new Blu ray from Warner Archive is lovely, with an excellent transfer of Gabriel Figueroa’s superb black and white photography. The boundless Figueroa shot Que Viva Mexico for Eisenstein, The Fugitive for John Ford, Los Olvidados for Buñuel, and Tarzan and the Mermaids for Robert Florey. Warners has included a few nice extras including two short promotional films, and two versions of the theatrical trailer.