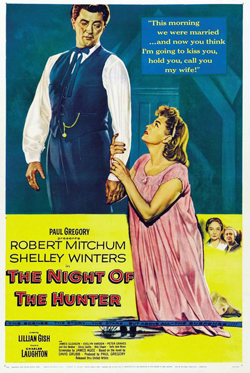 The Night of the Hunter

The only movie directed by Charles Laughton but he made it count. A brilliant mix of heavenly poetry and harrowing horror film, James Agee’s script, seemingly influenced by the New Testament and Jim Thompson, tells the story of a psychotic preacher (played by a terrifying Robert Mitchum) and his unstoppable hunt for some stolen loot. Lillian Gish and Stanley Cortez’s cinematography are the other high points of this perverse but tender thriller.