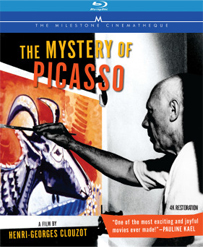 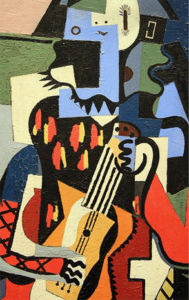 Attending a performance in the artist’s studio is one thing—to be there at the precise moment that inspiration strikes is quite another. Peter Jackson gives us the next best thing in Get Back, his new film about the Fab Four grappling with a distinctly Beatlesque dilemma—surrender the crown or continue their reign. The Beatles, musical geniuses to be sure,  have also proven marketing geniuses as well—especially when it comes to repackaging their catalogue. And with Jackson’s help, this new documentary, cobbled together from over 60 hours of film shot 52 years ago, is the ultimate repackaging project—Get Back is the only reality show we’ll ever need.

The press describes Jackson’s film as a “fly on the wall” experience but it’s more like we’re a fly on John Lennon’s shoulder—the intimacy is near claustrophobic, you almost want to apologize for intruding (it’s particularly intimidating when John stares right through the camera lens). But no matter what barriers are broken down, this particular gang of four can still seem inscrutable, not unlike the unknowable Dean Martin whose enigmatic persona is under the microscope in Tom Donahue’s recent King of Cool. Both documentaries weigh the impenetrable aspects of their subjects with the mysterious nature of their craft.

Artists have paraded their skills in front of the camera before but only with passing glances at their creative process. Walt Disney featured his staff illustrators on episodes of Disneyland in order to promote the studio’s latest product. 1973’s A Bigger Splash showed David Hockney fretting over his canvases but was just as concerned with his romantic entanglements. The same with 2008’s Guest of Cindy Sherman in which Sherman, known for her parodistic self-portraits, strikes up a love affair with the documentary’s director. A few artists paid the rent by setting up shop in TV studios; home spun art instructors Jon Gnagy and Bob Ross both had weekly shows; the goateed Gnagy—always clad in a lumberjack shirt—hosted a speedy but inspiring series of 15 minute lessons called Learn to Draw. Ross’s laid back demonstrations for The Joy of Painting became the art class equivalent of Yule Log videos.

In 1949 Pablo Picasso had his own Show and Tell moment when a Belgian illustrator named Paul Haesaerts filmed the 68 year old Spaniard at work and play along the empyrean Côte d’Azur, a fitting background for the artist’s own mythological personality. A brief slice of Picasso’s life at only 18 minutes, the film was called Visite à Picasso and featured the painter dashing off sketches using a loaded brush and a window pane for a canvas—Haesaerts’ camera sat on the other side of the glass and recorded each stroke. The film was finally released in 1952 and Henri-Georges Clouzot surely must have been a fan—four years later, he invited Picasso to repeat the performance. 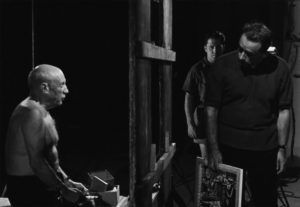 It’s a low bar for the director of such cold-blooded entertainments as The Wages of Fear and Diabolique, but The Mystery of Picasso is Clouzot’s most joyous film. Aside from a brief close-up of an agonized animal—a bull that could have been plucked from 1937’s Guernica—every one of Picasso’s creations for this 78 minute production radiates with happiness. And thanks to the occasional time lapse photography, the paintings grow before our eyes—they seem to bloom on screen. This go-around the artist has world class support; composer George Auric punctuates each new image with a stately or lighthearted fanfare and the photography is by the great Claude Renoir—it certainly wasn’t lost on Picasso that he was posing for Auguste Renoir’s grandson (Picasso fantasized about his daughter Maya mating with Claude just to see what kind of genius emerged from the union). 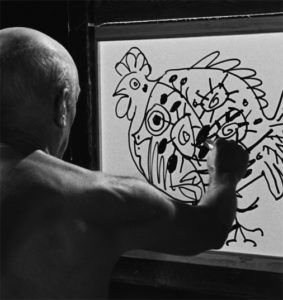 Haesaerts’ studio set-up is duplicated with the 75 year old magician once again performing one sleight of hand after the other—the paintings go through a blender of styles and formal explorations, a crazy quilt of techniques suggesting different modes of impressionism, expressionism, and cubism, this time with the added benefit of Eastmancolor.

The way the art is presented is Clouzot’s most dramatic change; instead of a pane of glass, Picasso works on a translucent scrim—paper stretched tightly on individual canvas frames. The act of painting is seen by the audience but Picasso himself is invisible—the effect is the like a medium’s trick where a ghost’s signature appears out of thin air. As for Clouzot, he plays the bystander, leaning against Renoir’s camera while fussing over technical concerns, watching the time, and schmoozing with Picasso between brushstrokes. Their dialog (almost certainly rehearsed) leads to some amusing revelations, like the fact that one painting that seems to have been completed within 30 seconds, actually took five hours to create. 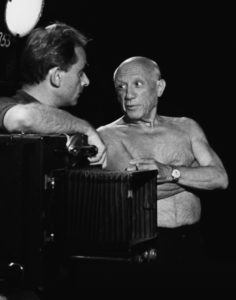 Picasso himself remains a glint-eyed mischief-maker, at the easel or tweaking his director. One thing he shared with the Beatles was their all-consuming fame—the five of them were veterans at being watched so their seeming nonchalance in front of a camera suggests a mix of genuine apathy and performance art. And as an artist, Picasso was a born performer—at age eleven he used his already prodigious skills to entertain his little cousins with drawings of house pets and other cuddly critters. Those nursery school art lessons turned into a game; the children would dare him to begin a drawing with just a tail or a leg and build around it. In a 1957 New Yorker profile Janet Flanner notes that he repeats the trick in The Mystery of Picasso, setting his eye on a point invisible to all but himself and coaxing a completely balanced and organized composition out of nothing. In Picasso’s world the moments of inspiration are fun, fast, and furious but no less mysterious.

Sometimes the artist does need a little assistance from his director, like a bigger, wider canvas… and voila, the screen expands to CinemaScope. With that moviemaker’s flourish Clouzot appears to have the last word but the film ends with Picasso autographing the widescreen canvas and sauntering offstage—a mic drop for the ages.

Though this may have been the closest Clouzot ever came to a heartwarming movie experience, he entered into the production with money on his mind; still flush from the overwhelming success of Diabolique and partnering with the world’s most famous artist, the director had visions of dollar signs dancing in his head. But The Mystery of Picasso was an unambiguous flop, causing Clouzot to retreat to his sweet spot the following year with the staunchly eccentric spy film, 1957’s Les Espions, and its equally eccentric cast, Peter Ustinov, Curd Jürgens, and Sam Jaffe. 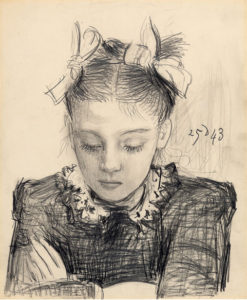 Kino Lorber’s new Blu ray of The Mystery of Picasso is, image-wise, everything the most persnickety connoisseur could hope for—the brightly colored results would inspire envy in any box of Crayolas. Kino has included two separate commentaries, one from Peggy Parsons, former head of the National Gallery of Art film department and the other from Archie Rand, muralist and CUNY presidential professor of art and art history at Brooklyn College. There’s also a rambunctious interview with Maya Picasso who seems to have inherited her father’s expansive humor and lust for life. She was one of her dad’s favorite subjects and those portraits are among some of the most penetrating images he ever produced—the bracing, and yes, mysterious, intelligence she exhibits in those paintings is still on exhibit today.

Consumer Reports addendum—make sure to access the commentaries through the “set up” link in the menu, not the “extras” option.

Featured at the top of this article is a detail from Picasso’s 1924 painting, Harlequin Musician, the drawing at the bottom is Portrait of Maya from 1943.