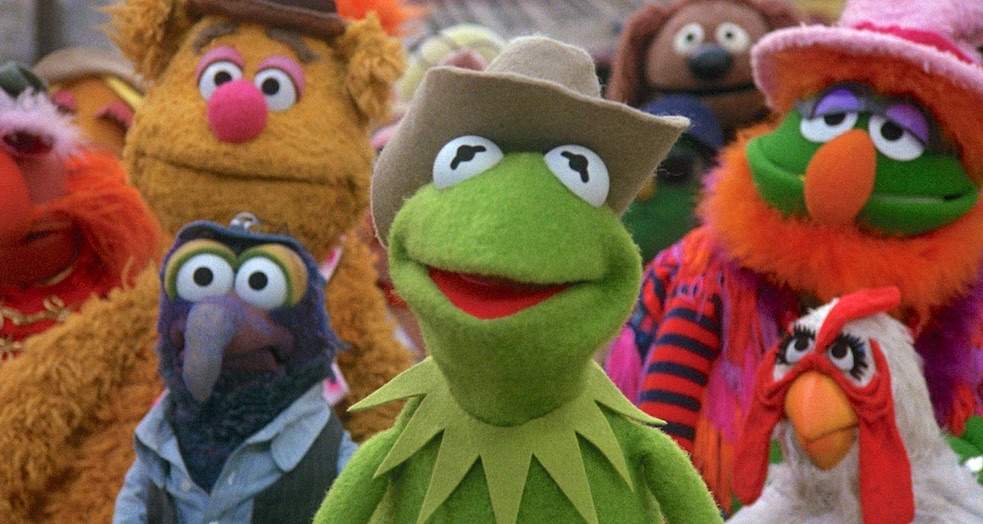 “A frog and a bear, seeing America!”

There was a time, not too long ago, when the world was swept up in full-on Muppet Mania. Adorable felt-and-foam constructions brought to convincing life by an array of artisans first overtook TV airwaves, then graduated to vinyl and celluloid. The excitement peaked with the release of the critters’ initial big screen adventure on June 22nd, 1979. The Muppet Movie will return to theaters across the country to commemorate that 40th birthday this summer via Fathom Events on July 25th and 30th. So what better time than now to wax poetic about the crowning and singular cinematic achievement that is The Muppet Movie? 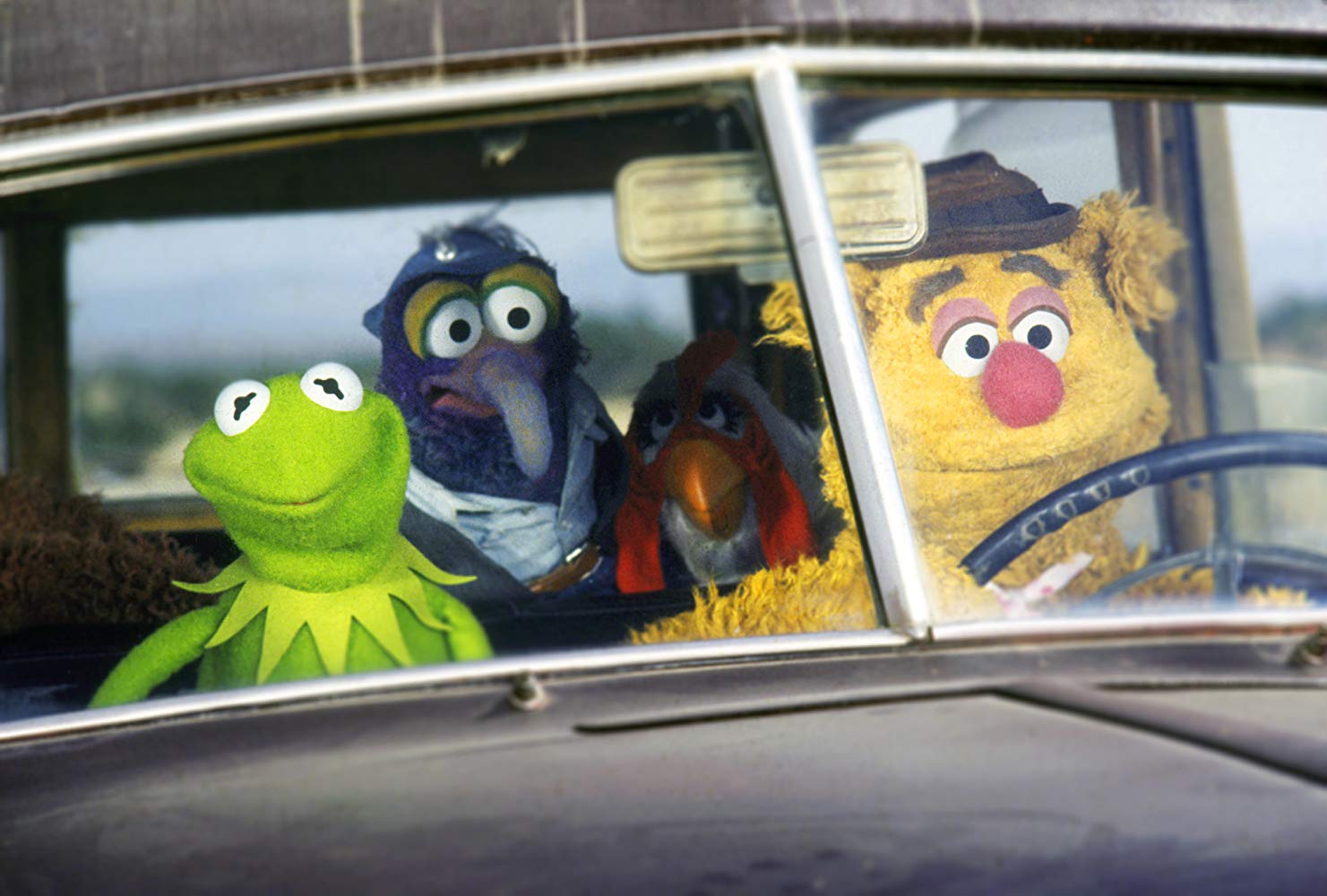 According to Christopher Finch’s excellent, comprehensive illustrated Jim Henson biography Jim Henson: The Works, Henson’s Muppets were commissioned to grace the silver screen by The Muppet Show producer Lord Lew Grade following the variety TV show’s successful second season (it would ultimately last for five seasons and 120 episodes). After years of interacting with rotating guest hosts on sets, The Muppet Show was a somewhat magical evolution for Kermit the Frog (Henson), Fozzie Bear (Frank Oz), Miss Piggy (Oz again), Gonzo (Dave Goelz), and all their cloth pals. A bear, a frog, and all their colorful compatriots would indeed see America, traversing much more realistic terrain with impressive ease.

Muppet performers Henson, Oz, Goelz, Jerry Nelson, and Richard Hunt took their critters out of the studio and into a bevy of real-world locations… convincingly! From Kermit riding a bicycle to Kermit strumming a banjo on a boat surrounded completely by water (remember, his puppeteer Henson had to manipulate Kermit’s motions, several years before the advent of computer-generated imagery), to Gonzo taking a 100-foot balloon ride, to a Busby Berkeley-channeling Miss Piggy musical number, The Muppet Movie served as a special showcase for a special batch of creature creators. 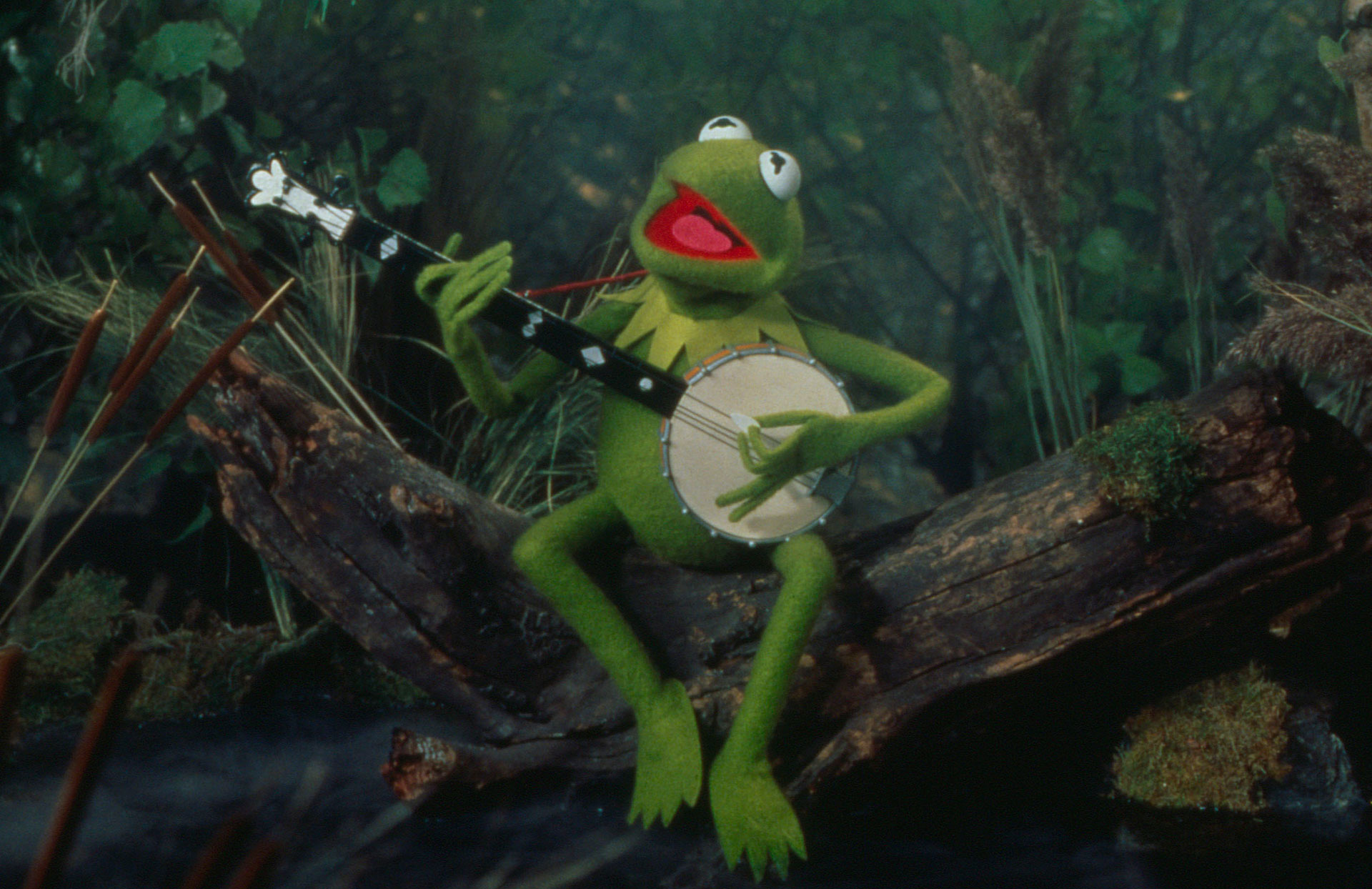 Our tale opens on a private screening in World Wide Studios (actually CBS Studio Center in Studio City), as a frazzled Kermit the Frog fetes a showing of the meat of the story, a movie-within-a-movie that Kermit concedes is “sort of approximately how” the Muppets got together. We discover Kermit with said banjo singing mournfully atop a log in a Floridian forest swap. The artistry of this in-camera effect is almost immediately overshadowed by just how sweetly compelling our puppet hero Kermit is. We stop fretting about the craftsmanship of the story and just buy it, hook, line and sinker by about the middle of the show-stopping opening number, “The Rainbow Connection.” Hot-shot Hollywood talent agent Bernie (Dom Deluise), struck by Kermit’s musical bonafides, recommends Kermit respond to an open casting call from World Wide Studios seeking “Frogs wishing to become Rich and Famous.”

Kermit quickly hops on his bicycle and sets off for Hollywood. Yes, it’s a spectacular effect, and no, you don’t think about just how tough it must have been to achieve until long after the movie’s over. Almost immediately, Kermit is beset by the sadistic restaurateur Doc Hopper (Charles Durning) and his hapless assistant Max (Austin Pendleton). Hopper instantly tries to recruit Kermit to act as the spokes-frog for his burgeoning fried frog legs fast food franchise. Sure, Hopper will also need to fry Kermit’s legs to seal the deal, but Hopper sees that as a small personal price for Kermit to pay. When Kermit denies him outright, Hopper and Max doggedly pursue Kermit for the rest of the picture.

After losing his bike in a construction mishap, Kermit encounters Fozzie Bear in the appropriately named dump El Sleezo Café. Kermit and Fozzie soon team up, and Kermit has upgraded his transit to Fozzie’s 1951 Bullet Nose Studebaker Commander. The duo soon finds Dr. Teeth and The Electric Mayhem rocking out in a church during a very meta exchange, and the band gives the Studebaker a psychedelic makeover. Kermit and Fonzie’s entourage quickly expands to include enterprising “plumbing artiste” Gonzo and his beloved Camilla the Chicken (Jerry Nelson), Bogen County Beauty Pageant champ and aspiring actress Miss Piggy, and committed bachelor bar pianist Rowlf The Dog (also Henson). As they continue struggling to evade Hopper, Max, and their growing stable of intimidating frog assassins, the Muppets’ modes of transit shift several times, and they run into many a delightful celebrity cameo en route to fame and fortune. 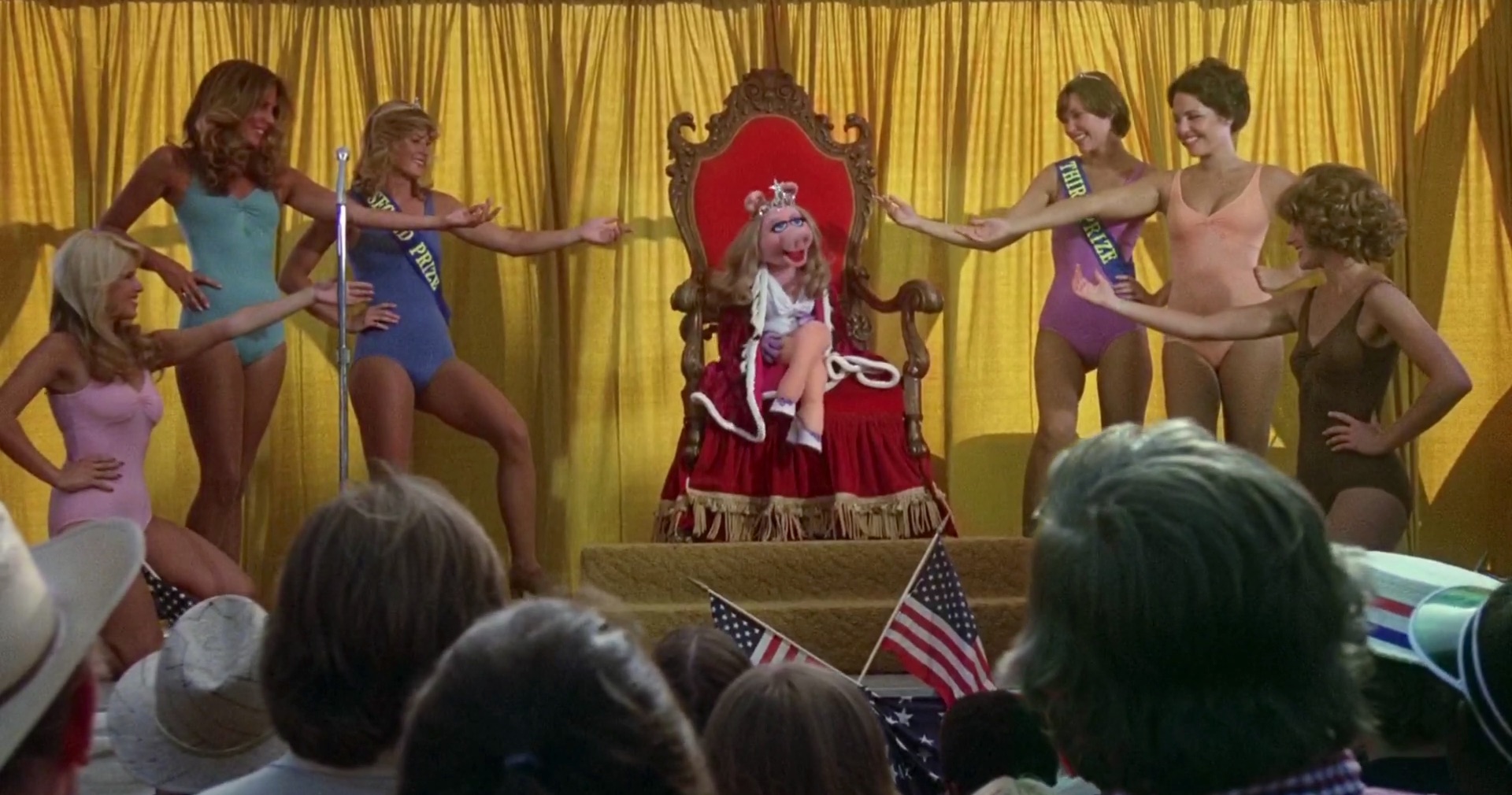 The joyfully rambling road picture effectively builds to an ultimate showdown pitting Kermit and his friends against Hopper and his hired guns in a deserted Western town. Following Kermit’s impassioned plea that Hopper cease his cruel designs on Kermit’s legs for his restaurant chain, we are for a moment convinced that Kermit has appealed to an untapped human decency somewhere deep in Hopper’s core. And though that would be emotionally satisfying, there would be absolutely nothing believable about that sudden character shift.

Doc Hopper’s irredeemability here somehow rings sadly true. Sometimes, evil is just evil, and there’s nothing you can do about it but hope a temporarily-enlarged mad drummer intercedes on your behalf. Electric Mayhem percussionist Animal (Oz again) proves to be just the Muppet for the job when he pops out of a nearby bar, after guzzling an invention from Bunsen and Beaker that briefly expands him to gargantuan proportions. Animal terrifies Hopper and his goons into a full, permanent retreat.

Do the Muppets make it to Hollywood and Vine? Do they find a way past Lew Lord’s pesky, animal hair-averse assistant (Cloris Leachman) to ink a Standard Rich And Famous Contract? Of course they do, and you won’t be able to wipe a dumb grin off your face when the gang celebrates with their show-stopping musical finale, “The Magic Store.”

There’s one more cameo that deserves special mention on this website. For those who don’t remember, though, I won’t spoil the identity of Hollywood studio bigwig Lew Lord. Lord stands as The Muppet Movie’s own Wizard of Oz at the end of these puppet dreamers’ rainbow. Let’s just say that it’s someone who never really got along with Hollywood studio bigwigs themselves.

Everyone has their favorite Muppet. Kermit is a fairly boilerplate choice, but I can’t in good conscience pick anyone else. Kermit can be meek and put-upon, but he remains winningly dogged in all his pursuits, and ultimately leads his creature consorts where they want to go with conviction, kindness and intelligence. He’s also a big fan of ponds. Suffice it to say, if he ran for president in 2020, he’d get my vote. My runner-up circa The Muppet Movie? Crazy Harry (Nelson again), the heavily caffeinated pyromaniac muppet. Sometimes, that disruptive anarchic itch feels pretty good to scratch, too.

The Muppet Movie was a smash hit in its day. It grossed $65.2 million domestically — equivalent to $234 million in 2019 ticket prices, according to Box Office Mojo, which would make it the 6th-best attended movie this year. The film’s music was so great that it merited two Academy Award nominations — Best Adaptation Score (no longer a category) and Best Original Song (“Rainbow Connection”). It was robbed in both instances. But then again, it’s almost cooler not to win, isn’t it? “The Muppet Movie” connected with critics as well as audiences, netting a very favorable 74% rating on Metacritic, a more accurate critical review aggregate than the somewhat-inflated Rotten Tomatoes. The two biggest movie critics in the universe at that time, Gene Siskel and Roger Ebert, numbered among its biggest champions. 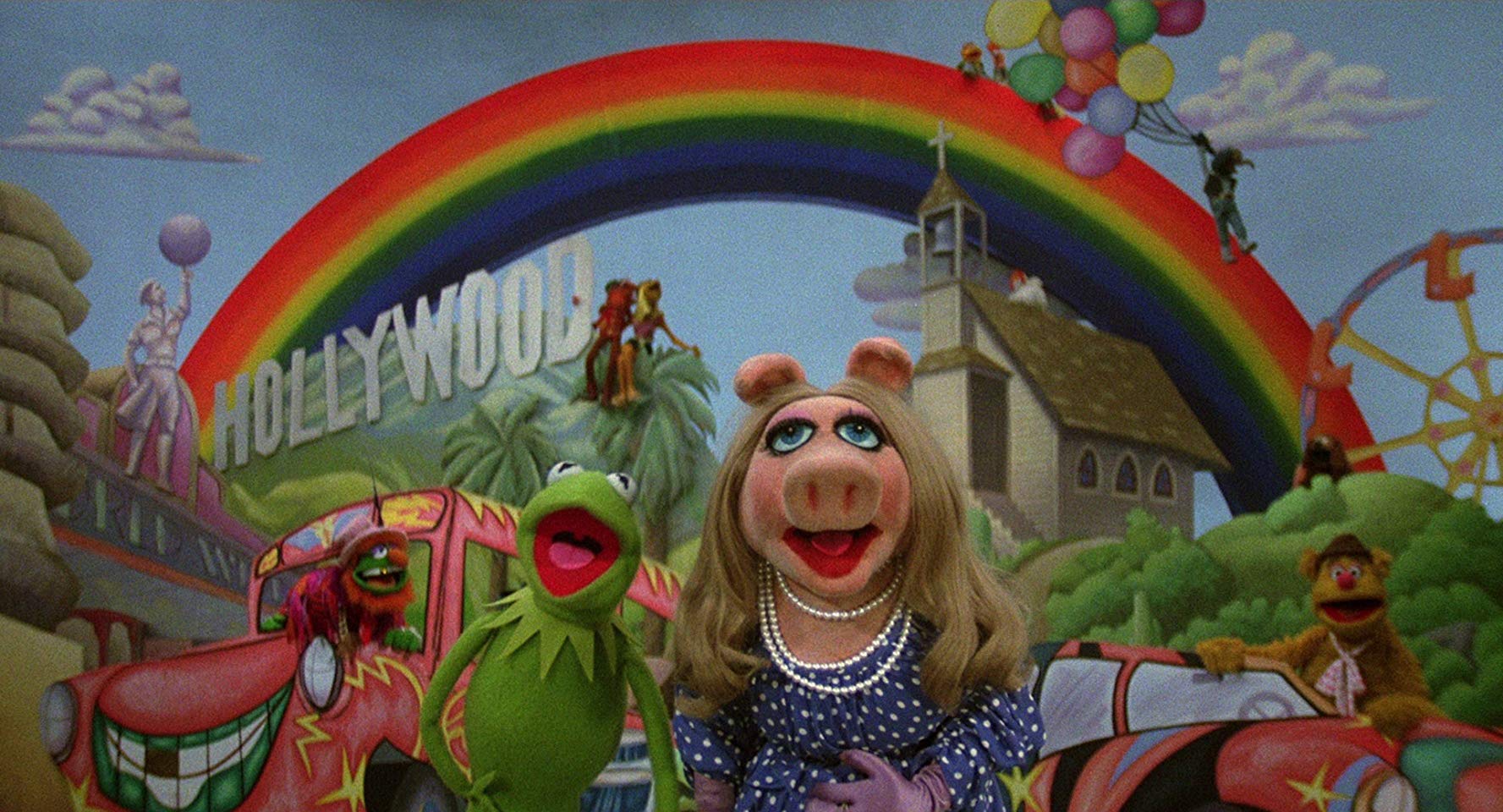 Directed by Muppet outsider James Frawley, produced by Henson, and written by Muppet Show scribes Jack Burns and Jerry Juhl, The Muppet Movie succeeds as a movie primarily because of some core elements that might feel passé to studio bigwigs today. It exhibits a uniquely tactile charm predicated on old-fashioned, clearly cheesy puppet creations. It employs a cleverly threadbare plot that harkens back to the Hope/Crosby/Lamour road pictures, with a sprinkling of a Western ensemble piece. This simple, familiar framework gives performers and puppeteers alike plenty of room to riff. It openly explores the relative darkness of its completely irredeemable chief villain’s frog legs spokesperson plot. And perhaps best of all, The Muppet Movie disarms us with a cheerfully ambiguous meta-awareness to engage and involve viewers in its tirelessly excitable “let’s put on a show” ethos.

Another standout here is The Muppet Movie‘s gorgeous soundtrack, featuring eminently hummable, banjo-heavy Grammy-winning compositions from Paul Williams (a hit songsmith throughout the 1970s, most famous in front of the camera as Little Enos Burdette in the first Smokey and the Bandit) and Kenneth Ascher (who also orchestrated string arrangements for several John Lennon and Yoko Ono albums). Standouts include the opening Kermit showstopper “Rainbow Connection” and the Miss Piggy’s lovestruck paean to Kermit “Never Before, Never Again,” but “Movin’ Right Along,” the winning Kermit-Fozzie duet, is the chipper adventure track that wedged itself into this viewer’s heart permanently upon first listen.

A small TFH connection: according to a 2011 interview with the New York Times, Trailers From Hell Guru John Landis happened to visit the set during the film’s 250-puppet-strong closing wide shot, and was commissioned to puppeteer Grover. He was joined in the pit by a pre-Pee Wee’s Big Adventure Tim Burton, then a puppeteer’s union member.