Do you miss the Stooges? Miss Edgar Kennedy? Here’s a bizarre bill of goods for committed film fans in search of retro fun. Will Ryan and Nick Santa Maria perform as a madcap ’30s comedy team in a series of imaginatively re-created broad short subjects, all designed to fit the style of the era. It works like gangbusters for those who relish their vintage slapstick laughs. 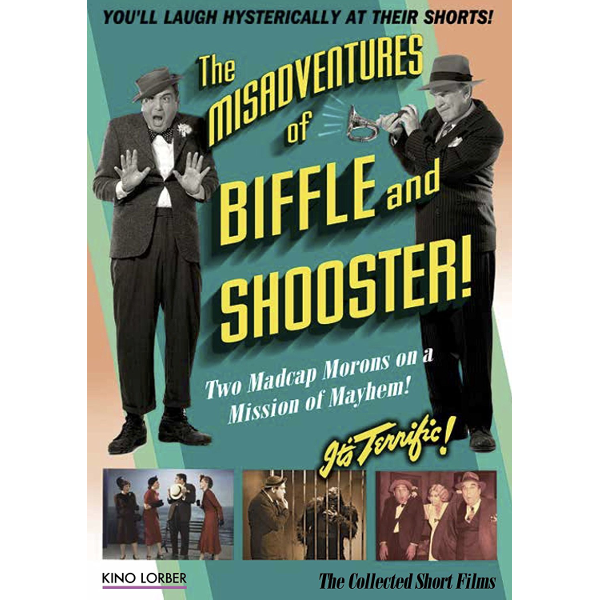 It takes about three minutes to fall under the peculiar spell woven by The Misadventures of Biffle and Shooster!, a collection of new short subjects. Biffle and Shooster are a mythical comedy duo of the yesteryear variety . . . from the deep Paleozoic, somewhere after Myron and Minkle and just before Abbott & Costello. They’re the kind of stage duo that segue’d to films directly from the burlesque/vaudeville stage. Five representative shorts are offered from various points in their ‘career,’ plus a rare early talkie short, seemingly found in a remote archive. But here’s the deal: the short subjects aren’t parodies or spoofs per se, but instead uncanny recreations of ’30s-era productions, down to every detail that can be reproduced, revived or conjured up from the past. Biffle and Shooster completely convince as low-comedy film personalities of an earlier era. Their stock in trade is the thickest, corniest, lame-brainiest schtick one can imagine. Not we-want-to-meet-them lovable, more they-really-seem-real lovable. It’s a polished act. Their signature bits of business include a goofy stock introduction line. They coordinate certain gestures, playing with their hats, pulling their ties and shooting funny faces at every opportunity. They do slow-burn reactions, mush their faces with their hands, and make frequent direct contact with the camera. They regularly do parodies of other famous comedians. They handle nonsense patter as well as Abbott & Costello.

B & S are the creations of comedians, actors and voiceover specialists Will Ryan and Nick Santa Maria. Billed together as a vaudeville-era comedy team, Nick is the goofus stooge and Will the (relatively) straight man. Writer-producer-director Michael Schlesinger was a Professor of Atmospheric Sciences and director of the Climate Research Group at the … no, that’s another notable Michael Schlesinger on Wiki. Our Michael Schlesinger is a career Hollywood man who ran the repertory departments of three studios and shepherded a number of classics, including Samuel Fuller’s White Dog. I first met him in a Sony screening room around 2004, when he was helping publicize and package a partly restored Major Dundee. Schlesinger is a lover of comedy in all of its forms and a hell of a raconteur. The TCM Film Festival occasionally brings in speakers to introduce individual pictures, and the three Schlesinger intros I witnessed were uproarious. Schlesinger has recreated the look and feel of the nitrate-era wonders that wowed us at museum and film school showings. One hasn’t lived until one has pondered some of these early talkies, especially ones that introduced famous acts like Burns and Allen. The five main B & S short subjects mimic closely the silly scenarios that were thrown together to support established stage personalities. There’s the murder mystery story (The Biffle Murder Case), a cross-dressing farce (Imitation of Wife), The plotless musical revue (Schmo Boat), the haunted house comedy (Bride of Finklestein) and a classic mix-up in an art gallery, (It’s a Frame-Up!). Biffle and Shooster aren’t as violent as The Three Stooges, but the comedy is just as broad. Perhaps a slightly closer reference are the comedy short subjects of Edgar Kennedy. The situations are staged and ritualized in that half-stagey way we know so well, as Bob Birchard would often say, “Simple stories for simple people.” It’s the kind of hard sell comedy that makes unfunny jokes funny. The specialty of the amiably infantile Biffle is the ‘spit take,’ a reaction that causes him to shower the set and anybody nearby with whatever he is drinking.

The technical trimmings are accurate as well. The title cards and music tracks have a vintage look and sound. They disorient us somewhat by crediting real names and studios — the shorts we see were released by United Artists, it says so right on the screen. They even carry Roman numerals for the year of release. Only at the end does an alternate credit sequence catch us up with reality. The sets feel authentic and the costumes accurate; Schlesinger has pulled in a group of clever actors to ‘be’ actor-personalities from the era, character actors that know their type and sell it to the camera. Some of the comedy is ethnic: a Jewish mad doctor! Biffle and Shooster match wits with a black butler who has his own refreshingly smart comebacks to various insults. The B&W images imitate the straight-on filming style of the ’30s — the unfussy angles give the personalities extra-wide comedy space. The shorts don’t become repetitive because each exploits different comedy material.

In fact, the more arcane the subject, the more the shorts succeed. Schmo Boat looks very much like 1,001 shorts desperate to find a story pretext to tie three or four musical acts together. The singers put the tunes across with just seven musicians and a tiny piece of floor on which to dance. The audio is live and the talent on view is real, and charming. Bride of Finklestein succeeds by sticking with the same limitations lumped on vintage haunted house farces — the only special effect are cheesy animated bolts of electricity. Every mad scientist must have his own captive ape, and this one is named ‘Schlomo.’ Effects makeup man Chris Walas provides an excellent mime performance in the hairy costume. The supporting players are veteran actors and comedy personalities. Actor Stan Taffel appears to also be a film archivist. A number of surprise star guests join the comedy — Robert Forster is a detective, while Dick Miller offers a cute cameo. For It’s a Frame-Up, favorite Robert Picardo puts in yet another amazing chameleon appearance as a drunk. He plays opposite Daniel Roebuck, who is channeling Edgar Kennedy. The chemistry is real; we react to the pair like we might The Marx Brothers or W.C Fields with Grady Sutton.

The Schlesinger, Ryan and Santa Maria partnership has done what it can to build an entire franchise around B & S . . . Hm, why not ‘BS Productions?’ The first short was filmed in 2012 and the other four in 2014. A comic book seems to exist as well, like the ones we once saw for Bob Hope and Jerry Lewis. Posters were mocked up for the individual shorts. Finally, four of the shows were assembled into a theatrical presentation, The Adventures of Biffle and Shooster!  This DVD explodes the package back to individual shorts, and the feature’s separate opening titles and between-act bumpers have been added to the lengthy stack of extras.

Oh yes, it’s important to stress the notion of simple FUN in this show. It’s infectiously endearing. The ‘boys’ work hard to be funny, but a genuine joy for the work shows through. I watched carefully, and caught at least two ‘Peter Bull’ moments, where an actor almost loses his demeanor and starts to laugh. It’s nice that they were left in. The Kino Lorber DVD of The Misadventures of Biffle and Shooster! is a polished presentation. The B&W images are strong, as is the audio.

Michael Schlesinger has added a great volume of extras; I believe I read him online wailing that there wasn’t enough room for everything he wanted to include. What’s here is good. All five of the main shorts carry commentaries with Mike, Nick and Will, and each short is also given a gallery of outtakes, etc. Additional outtake compilations highlight a patient clapper girl woman and additional music numbers. The outtakes are in color, answering the question of how the shorts were originally filmed.

Even more arcane is an imitation of a charity Public Service spot, of the kind once shown to raise money in theaters. A fake clip pretends that the comedy team came out of retirement for a cameo in It’s a Mad, Mad, Mad, Mad World. That’s Mike’s favorite movie, by the way. There’s also an improvised interview with the duo as old-timers. Ryan and Santa Maria prove that they can fake their way through anything, and still remain in character. An extra short subject called First Things Last pushes the ‘fake vintage find’ notion to an extreme. Supposedly the team’s second attempt to work on film, it sees the two stage actors marooned on a curtained set, where they improvise various business with only a ukelele and a guitar as props. Their act suggests a successful duo not yet comfortable with the camera — they hem and haw and stumble a bit. A stickler for detail, Schlesinger gives the faux-vintage short the look of film barely rescued from oblivion: the soundtrack is weak and the image a bit misty. Maybe the only audiences to ‘get’ Biffle and Shooster a hundred percent will be those already attuned to obscure and exotic old film artifacts. But newcomers may become more interested in old movies, which is always a good thing.