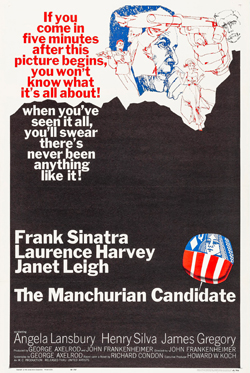 Perfectly cast down to the smallest roles, director John Frankenheimer’s stunning satirical thriller was part of his remarkable run of quality hits during the 1960s. Oddly, this one was not a box office success and its classic status only kicked in when it was reissued in 1988, after being pulled from distribution following the Kennedy assassination. Laurence Harvey, as an army grunt programmed into a killing machine by Chinese communists, never found another part that played so well to his icy persona and Angela Lansbury, only three years his senior, is unforgettable as his monstrous mother. One of JFK’s favorite movies. The misguided 2004 remake turns it into a science fiction movie!