A thyroid operation every ten years, plus regular libations of an eerie green liquid, has allowed Anton Diffring to live over a hundred years without looking a year over forty. Hammer’s medical horror show features Christopher Lee, Hazel Court and sumptuous cinematography, but not a whole lot of surprises. 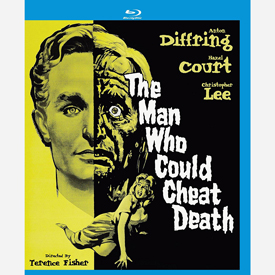 For its first two years of Technicolor horror Hammer Films could seemingly do no wrong. In just a few months their revivals of classic horror motifs were being bankrolled and released by several Hollywood majors: Warner Bros., Columbia, United Artists, Universal. In 1959 came their The Man Who Could Cheat Death, a remake of an already obscure ’40s horror picture from Paramount Pictures. With three top stars and Hammer’s best director the remake offers the same intense visual surface as the classic Hammer attractions that broke box office records worldwide. But it also reflects Hammer’s unwillingness to develop their product line.

Set in Paris, the story arranges familiar motifs from The Picture of Dorian Gray and Dr. Jekyll and Mr. Hyde, with a streak of Edwardian medical horror. The cultured, ultra-cool Dr. Georges Bonnet (Anton Diffring) amuses himself with parties to show off his latest artworks, but in reality is desperate for his old partner Professor Ludwig Weiss (Arnold Marlé) to perform an ‘uter-parathyroid’ operation that will give him ten more years of youth and vitality. Until then Bonnet must drink a secret formula every six hours, or revert to an alarming state of decrepitude. Beautiful Janine Dubois (Hazel Court) would like to turn modeling for Bonnet into a permanent relationship. Dr. Weiss arrives, but a paralysis of his arm prevents him from operating. Bonnet tries to interest Janine’s suitor Dr. Pierre Gerard (Christopher Lee) in performing the gland-switch procedure. That’s when inspector LeGris (Francis De Wolff) begins nosing around, looking for another of the doctor’s models, that has mysteriously disappeared. The dossier LeGris is accumulating on Dr. Bonnet doesn’t make sense — it indicates that he is at least a hundred years old! 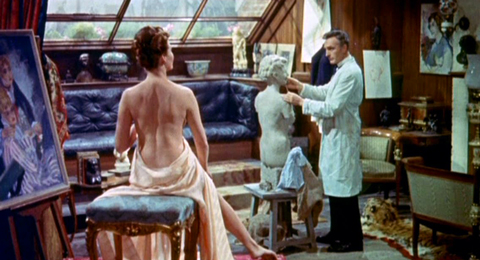 Just as they used their co-production deal with Universal to do remakes of 1930s horror classics, Hammer delved into Paramount’s library to unearth their 1945 The Man in Half Moon Street, a spooky if tame chiller that starred Nils Asther and Helen Walker. Barré Lyndon’s original play is about a Dr. Jekyll type who both benefits and suffers from a surgically obtained fountain of youth. The remake has plenty going for it, beginning with fine work from top Hammer talent like designer Bernard Robinson and makeup artist Roy Ashton. The color has the super-saturated look of the early Hammer films, before they began printing in Eastmancolor.

Directed with an emphasis on atmosphere by Ralph Murphy, the original Man in Half Moon Street treated its horrors with a misty, look-the-other-way discretion, which presented Hammer with the opportunity to reshape the material. Terence Fisher directs in his sensationalist style, derived from the style of Gainsborough’s thrillers of the ‘forties. Screenwriter Jimmy Sangster’s script can only be described as lazy. Sangster isn’t responsible for the its too-explicit title, as his original was ‘The Man in the Rue Noire.’ His adaptation dispenses with the earlier film’s careful introduction of its fantastic content, and sacrifices its deep sense of mystery. The original retained a ‘did it really happen?’ quality, while Hammer’s revamp makes everything explicit.

The story has been shrunken in scope, with fewer characters and the action restricted to three or four beautiful but claustrophobic rooms. Little or no French atmosphere is conveyed. Although minimally re-dressed, it is all too obvious that Hammer is using the same ‘locations’ in and around its Manor House headquarters at Bray. Dr. Bonnet’s front doorway appears to be reused as Dr. Gerard’s front doorway, with the addition of some extra fog. We get the impression that if Hazel Court took two steps to her right, she’d walk off the set. The film is under-populated, uneventful, and padded with hazy moral discussions.

Sangster’s preference (or inability) to maintain subtleties is reflected in a main character of limited interest. Anybody hanging around Dr. Bonnet for a day or two would suspect him of something. His behavior is unbelievably suspicious. He insults guests, insinuates dark deeds to his uncomprehending lady friends and then pacifies them with smooth talk that only makes him seem less trustworthy. Policeman LeGris rattles off twenty facts linking Bonnet to odd disappearances, and then sighs because he hasn’t any clues. 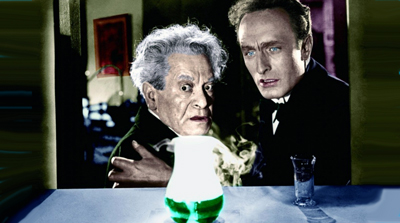 Although the screenplay is the main culprit, the film lacks some of Hammer’s distinguishing graces. Terence Fisher has a knack for animating small-scale productions, blocking scenes on small sets with great skill. Both The Mummy and The Hound of the Baskervilles show Fisher successfully paying off build-ups to horror (a mummy break-in, a tarantula attack) not with a flurry of cuts but instead static wide shots that perfectly frame the action. The Man Who Could Cheat Death presents few opportunities for Fisher to construct shock scenes. Sangster’s script has almost no action, as in a TV play. People instead talk about Bonnet’s mysterious activities.

Hammer films have always been praised for excellent performances but star Anton Diffring is either miscast or he resisted direction. He’s got a great presence as a potential horror icon but overplays his many solo moments. While Christopher Lee underplays, Diffring underscores every moment with twitches and facial contortions, as if inspired by the silent performances of Conrad Veidt. Bonnet can’t seem to remember to take his ‘medicine’ on time, which leads to repeated displays of eye-popping anxiety. Diffring did far better in the next year’s Circus of Horrors, dialing back his performance into a delicious blend of cultured villainy. Director Fisher allows Diffring to play into the camera, and matches his excesses with extreme accent lighting. The result feels more than a little forced, especially when the vault holding Bonnet’s secret potion is bathed in a ghostly, completely unmotivated green light. 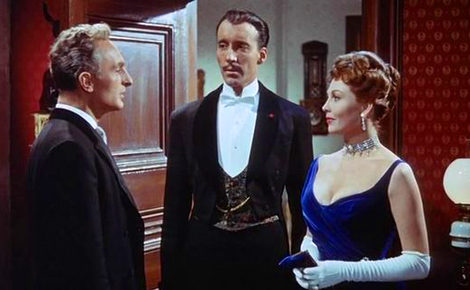 Christopher Lee’s role is barely more than functional, and he’s atypically unimpressive. The talented Arnold Marlé is well remembered as the High Lama in the Val Guest / Hammer The Abominable Snowman. He’s good as the elderly Dr. Weiss, but Weiss and Bonnet hold center stage far too long. Coming off much better is the late Hazel Court, who makes the character of ‘the girlfriend’, usually a throwaway, into the film’s most memorable presence. The nude artistic modeling is an obvious substitute for sex, a cliché that the film gets away with mainly because Janine Dubois seems so fulfilled by the experience. Georges Bonnet only thinks he’s in control of his life, while Janine Dubois has found an exciting way to fully experience it, even in this unusually stuffy vision of Paris.

Georges Bonnet never really appreciates his artificially extended youth, so we never feel that his extraordinary efforts have achieved anything worthwhile. The youthful Bonnet and the elderly Weiss were once school chums together, but nothing in the script examines how their relationship has developed, with one remaining youthful. Bonnet’s artistic urge to sculpt is given little or no relation to his personality or predicament. Bonnet is just a criminal freak, unlike the sympathetic figures of other movies about people cheating the natural order of the human aging process: The Leech Woman, 4D Man and The Asphyx.

When Bonnet’s eyes begin to revert to their true age, makeup man Roy Ashton provides dramatic facial makeup. The doctor’s final transformation is muffed with an unimpressive mask that looks good only in stills. Far more disturbing are the permanent marks left on the face of Bonnet’s first victim (Delphi Lawrence) during an early struggle — it almost seems as if Bonnet has an acid touch, a sensational fillip as unmotivated as the green light that keeps popping up whenever he experiences ‘transformation distress.’ What we remember best from the tame The Man Who Could Cheat Death is its sensuous Jack Asher cinematography, and the performance of Hazel Court. As with many live-wire actresses relegated to genre work in the 1950s and ’60s, Ms. Court looks game for anything — only the prudish filmmakers held her back. 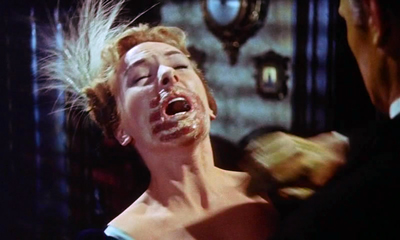 The KL Studio Classics Blu-ray of The Man Who Could Cheat Death is an improvement on the Legend DVD of nine years ago (and a newer BD combo), offering brighter color and more detail. Kino has confirmed that it’s the same transfer, but with some additional cleanup work. The scan seems a bit grainy and soft overall, looking good but not as striking as other recent Hammer revivals on Blu-ray. Just the same, when the screen goes green and Anton Diffring’s eyes begin to pop wide, the picture really comes to life.

Knowing the love of fans for the inside story on Hammer product, Kino ladles on extra helpings of expert research and opinion… from real experts. Troy Howarth’s authoritative feature commentary gives us the full production story, separating known facts from fan apocrypha. Yep, it’s true that Peter Cushing turned down the Dr. Georges Bonnet role at the last minute, forcing the substitution of Anton Diffring. But the casting choice didn’t come out of left field, for Howarth explains that Diffring had recently played Bonnet in a version of the story for British TV. Arnold Marle repeated his TV role from the same show. Savant correspondent Greg Stevens pointed out these facts for my older review of The Man Who Could Cheat Death.

Troy Howarth addresses the notorious topless scene with Hazel Court, that always comes up when fans discuss the movie. Such a shot exists, as a scratched film frame image proved at one time at the Classic Horror Film Board. But nobody has found it in a print of the film, French or otherwise. Not so! Matthew Harrison informs me that the topless scene is included on Ted Newsom’s revised Hammer documentary Flesh and Blood.  Troy has no further info to impart about rumors of additional shots culled from Dr. Bonnet’s final disintegration scene… the way it is filmed, I’m willing to believe that such material is the result of wishful thinking. Howarth also has an agreeable speaking voice and pleasant manner, which helps enormously — I’m envious. 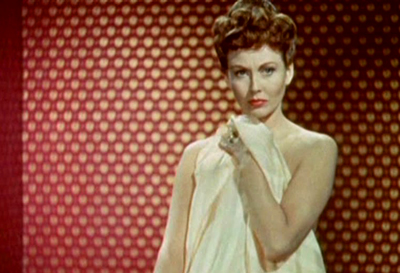 Kino also includes Arrow-produced featurettes with UK horror authorities Kim Newman and Jonathan Rigby, that together total upwards of half an hour of additional expert insight. Kim Newman offers a good sense of humor with his historical detail, and Jonathan Rigby (whose new book Euro Gothic sounds pretty attractive) brings up subjects I wouldn’t have thought of, such as the historical antecedent of medical humbugs claiming miraculous cures from the application of monkey glands. They also note the film’s missed opportunities. At one point Janine encounters one of Dr. Bonnet’s earlier victims, imprisoned in a basement room. And the script doesn’t even give them a chance to talk to each other! Between these three interviews we receive enough insight and wisdom to close the book on this oddball Hammer picture — and I have to confess to freezing the frame to read the spines of the books and video discs on the shelves behind them.

Included are trailers for several Kino horror shows, plus the Trailers from Hell episode on The Skull with Joe Dante. The Man Who Could Cheat Death may not be the best Hammer show, but it is from the early classic period that the fans respond to the most. Christopher Lee isn’t served particularly well but Anton Diffring is quite something to experience and Hazel Court proves once again that she’s horror’s unappreciated Scream Queen great.