Robert Mulligan’s late career gem is a beautiful, fad-free tale of teenage romance with universal appeal, famed for introducing Reese Witherspoon to the screen. She’s truly a sensation, as is the actress Emily Warfield as the older sister who ‘steals’ Reese’s beau. Photographed by Freddie Francis, this tops even Mulligan’s To Kill a Mockingbird. 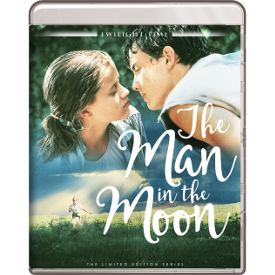 I certainly didn’t want this one to get away. I started work at the newly reconstituted MGM in 1991, when it was pretending that the ownership upsets and financial woes of the previous few years were gone for good. The brief MGM/Pathé regime had come out with some likely winners with big names attached, but all of a sudden most of the projects seemed underfunded, light in star power, or were ‘artistic efforts’ that couldn’t be expected to gather mass audiences. They needed hits to get on a roll, and that didn’t happen for four years, in a brief window of time where the production execs rebooted James Bond, and scored with things like The Birdcage and Get Shorty. 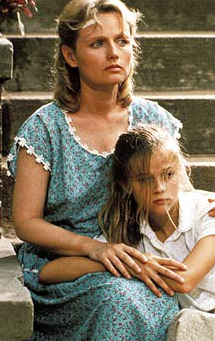 The Man in the Moon had every chance to be a breakout hit. It’s an excellent drama with fresh, exciting performers, and its filmmakers should have been treated as stars as well. Mark Rydell was an actor who became both a fine director and producer. Robert Mulligan was the directing talent behind To Kill a Mockingbird, a film now recalled with an almost universal reverence. The Man in the Moon has the same sensitivity to the feelings of children, in this case children becoming sexually aware adults.

The catchall phrase would call this a ‘coming of age’ movie, but Mulligan and screenwriter Jenny Wingfield achieve much more than that. The big news in Hollywood that year was Thelma & Louise, which made publicity hay out of its woman screenwriter — big magazine coverage, etc. But that Ridley Scott movie is essentially a distaff riff on the male action buddy movie. Ms. Wingfield’s original screenplay for Moon received much less attention, and her later film credits are on TV movies and Disney animated sequels. Today The Man in the Moon is remembered as a go-to title to see the origins of actress Reese Witherspoon — did any child actress ever make such an auspicious debut?

The Trant family of Louisiana is nothing if not prolific; with two daughters already in their teens and a girl-toddler in the house, Abigail (Tess Harper) is pregnant again, hoping for a boy for her husband Matthew (Sam Waterston). College candidate Maureen (Emily Warfield) must fend off unwanted advances from a local boy, while her 14-year-old sister Dani (Reese Witherspoon) is trying to sort out her own feelings on romance. Widow Marie Foster (Gail Strickland) moves back to the neighboring farm; she has three smaller boys and a teenage son, Court (Jason London) who is going to take on the responsibility of getting the farm going again. Dani and Court meet cute at the waterhole and form an affectionate friendship, that Dani thinks is a romance. Court likes Dani but intuits that she’s just too young. They nevertheless keep meeting, and Dani maneuvers them into a kissing relationship. The trouble comes when Court finally meets Maureen, who is both more age-appropriate and irresistibly attractive. How is Dani going to handle this sisterly ‘treachery?’ 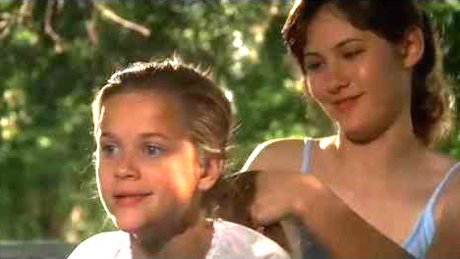 The Man in the Moon is a sure-footed drama that quickly draws us into the lives of the Trants. It’s not the Great Depression, as was the case in To Kill a Mockingbird, and no major theme of social injustice surfaces. But the intimate life of Dani and Maureen is given a respectful showcase. Maureen looks like she has her act together yet feels as confused as any teenaged girl. Dani worships the older sister who seemingly has everything: brains, charm and an adult body that attracts boys.

Everybody works, all the time, unlike in earlier Hollywood fantasy versions of country life. Matthew watches his girls like a hawk but he and Abigail know that they must trust that they’ll behave properly with boys. Maureen’s failed night out at a dance sees her mauled not only by her date but his lecherous father as well. And Matthew can’t keep the kids prisoners. They say ‘yes sir’ and ‘no sir’ but Dani claims the freedom to meet Court at the water hole. And there’s plenty of privacy to be had in the fields.

The key scenes between Dani, Maureen and the new neighbor boy Court couldn’t be better. The sisterly relationship has a sensitivity few films achieve. Maureen even teaches Dani how to kiss, a moment that demonstrates their ambivalent situation — they’re mixtures of innocence, inexperience and limitless sensuality. We can’t help but react positively to Dani’s delight in finding that Court approves of her, and likes to be with her. Her first kiss seemingly tranforms her from a pre-teen to a grown woman, with just a change of facial expression. The later meet-up of Court and Maureen is one of those moments that can determine an entire future. They seem perfect for each other in every respect, and bound to find total approval from their parents — we can tell that they’re mature enough to do the smart thing, like hold off on marriage to let Court get the farm going and Maureen to attend college. The problem here is universal — a girl ‘steals’ her sister’s beau, which tests everybody’s character.

Some viewers might feel insecure that the film doesn’t impose a rigid moral ideology over what happens. While worrying about Dani, Abigail has an accident that puts her in the hospital and threatens her unborn child. Dani was misbehaving at the time, but Moon doesn’t go so far as to say that she’s responsible for the accident. Matthew Trant doesn’t go to church with the rest of the family, and Dani would like not to go either. The show doesn’t claim that the Trant’s are punished for this — although it seems obvious that a fundamentalist reading of the movie would ignore the human dimension and explain the story’s various tragedies as the judgment of God. 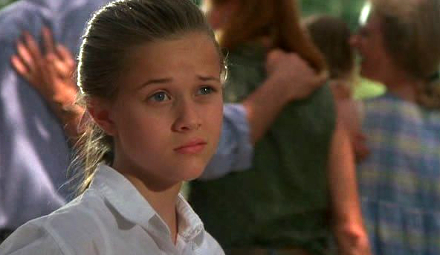 The script deftly sketches the context and background history for these teen romances. Marie Foster was once a beau of Matthew Trant, a long time ago, and she and Abigail are now the closest of friends. The townspeople we see amount to one busybody and the obnoxious son and father of Maureen’s dance date. The Trants and the Fosters must work hard, but these are basically good times and survival doesn’t appear to be at stake. Pop culture comes in with Dani’s worship of Elvis Presley, who she throws over when Court comes along as the boy of her dreams. It’s a major hint that Dani is indeed too young to know her own mind, and that Court is more of a puppy-love crush. Mercifully, nobody steps on Dani’s pride with that information, not even Maureen. The choice of Elvis songs is appropriate to 1957, and it’s telling that Dani goes for a ballad, not a rock ‘n’ roll hit. Of course, the cynical choice would have been Presley’s “Little Sister,” but that song was still four years in the future.

The Man in the Moon looks and sounds terrific. Ace cameraman Freddie Francis handled the lighting, which shows off the gorgeous Louisiana locations without prettifying the greenery or idealizing images for nostalgia’s sake. This is one fine-looking movie.

It’s also an exceedingly strong movie for performances. Reese Witherspoon’s fresh and unspoiled face is not easily forgotten. Emily Warfield conveys the intelligence and instincts of a smart country girl, without the hayseed trimmings. The actors sketching the slightly older generation give us smart, underplayed portraits of integrity and good humor. These are demanding roles without a great deal of screen time, and director Mulligan’s work shows skill, sensitivity and good taste. Almost all of Mulligan’s pictures feature intense, special performances; he even got something different out of Steve McQueen. To Kill A Mockingbird gets all the attention but for me this is his most satisfying picture.

The Twilight Time Blu-ray of The Man in the Moon is a fine scan and encoding of this very handsome show. The rural images are not ‘ooh-ah’ postcard art, but we really believe we’re somewhere deep in the South. Dani and Maureen have their own rooms upstairs but sleep on the screened porch to avoid the summer heat. The girls’ bright faces raise one’s spirits.

The show comes with a trailer and an isolated music track, but no commentary or featurette. Despite glowing reviews, the show didn’t make much of a dent in the movie world in 1991. At the time it seemed to me that MGM didn’t or couldn’t give it the push it deserved. I have a feeling that its potential audience had chosen instead to go back to see Terminator 2: Judgment Day for a third time. Julie Kirgo’s insert pamphlet notes nail the essence of the film’s pitch-perfect scenes of teen romance, pointing to the moment when Dani follows up Court’s offer of friendship by plainly stating her desire to know all about him. In scenes like that, The Man in the Moon leaps forward to a rare feeling of shared emotional honesty.