The name talent attached makes this late- Weimar thriller a must-see proposition: Billy Wilder, Robert & Curt Siodmak, Franz Waxman. Their dark murder farce resembles what would later become the self-aware Black Comedy. The trouble begins when a suicidal nice guy can’t pull the trigger, and hires a crook to do the job for him. The satire is clever but the execution is awkward — the filmmakers set up big laughs that the heavy German filming style doesn’t deliver. Just the same, the situations seem extremely progressive, ahead of their time. Here’s one that’s been short-changed by faulty film history: I know I’ve read in articles that The Man in Search of his Murderer is the original version of Rudolph Maté’s classic D.O.A., the trick-plot film noir in which Edmond O’Brien is poisoned with a radioactive element, and spends his final three days tracking down his killer. Expecting a serious drama, I discovered that the film is a knockabout, irreverent comedy that begins with a man trying to commit suicide. I’ll have more to say about that angle later down the page.

We’re told that happy gang of young Berlin filmmakers enjoyed a big breakthrough with their independently filmed 1930 picture People on Sunday. Brothers Robert and Curt Siodmak, Billy Wilder, Eugen Schüfftan and Edgar G. Ulmer talked producer Seymour Nebenzal into backing a new kind of docu-drama, a ‘day in the city’ film showing how Berliners relax and entertain themselves, with a rudimentary storyline about four youngsters picnicking in the park. When People on Sunday became a hit, the big producer Erich Pommer hired them to make films for UfA. Some did better than others, but a year later, Der Mann, der seinen Mörder sucht was created as a team effort. We’re told that writers Ludwig Hirschfeld, Curt Siodmak, and Billy Wilder tossed out story ideas just as if they were in a writing pool for a TV sitcom, competing for attention and credit.

Getting nowhere with his girl and dissatisfied with his life, Hans Herfort (Heinz Rühmann) wants to kill himself but hasn’t the nerve to pull the trigger. An interloping burglar provides some needed assistance: Hans contracts with him to do the job, within a day. Naturally, not long after the deal is signed, Hans’ fortunes take a turn for the better, especially when he meets the lovely, romantically inclined Kitty (Lien Deyers). Calling off the self-directed ‘hit’ proves to be difficult — he can’t get a message through to the burglar. When his varied murder attempts keep failing, the burglar sub-contracts the hit to a specialist, a vicious killer who goes by the name ‘Jim, the man with the scar.’ Hans’ close friends want to help him, but they mostly get in the way.

Conceptually speaking The Man in Search of his Murderer certainly feels original; most of its humor is tongue-in-cheek, situational rather than character driven. What it lacks is a lightness of characterization and tone — not the most Germanic of qualities. Lien Deyers’ Kitty is buoyant but Rührmann’s rather low-key hero is not. The supporting characters — the crooks — fit into the comedy mechanics but aren’t in themselves a big source of amusement.

The screenplay might also be a bit too busy. The framing story can’t quite manage some of the wild ideas (well, wild for 1931) that Erich Pommer’s writing pool tries to jam into it. Some of the set pieces feel like dry runs for cynical ‘casual murder’ humor that didn’t become fashionable until the 1960s. Director Siodmak manages well enough, but he hasn’t yet nailed down his precise, orderly style. His American thrillers are visually more expressive, more ‘Germanic’ than what’s seen here.

The story-by-committee gets a lot of mileage from the invention of a fanciful ‘Criminal’s Clearinghouse Organization,’ a Union for crooks. As soon as he’s offered the kill contract, the burglar checks in to make sure he can escape legal liability for aiding and abetting a suicide. The burglar then hides out at a crook’s clubhouse called the ‘White Vest,’ where the film indulges what looks like a satire on the elaborate underground society invented by Kurt Weill & Bertholt Brecht for Die 3 Groshen-Oper.

The screenplay does its best to keep the premise afloat, avoiding bloodshed but not quite making us care about the pleasant but somewhat slow-witted Hans. Erich Pommer’s writers come up with some winning ideas, as when a sniper’s attempts to nail Hans from the rooftop next door are repeatedly foiled because Kitty keeps getting in the way. Another funny moment sees Hans happy to be tossed in jail because he thinks he’ll be safe. He instead is immediately forced to join the escape attempt of his cellmate, a Berlin-Alexanderplatz– like thug whose name just happens to be ‘Jim.’ 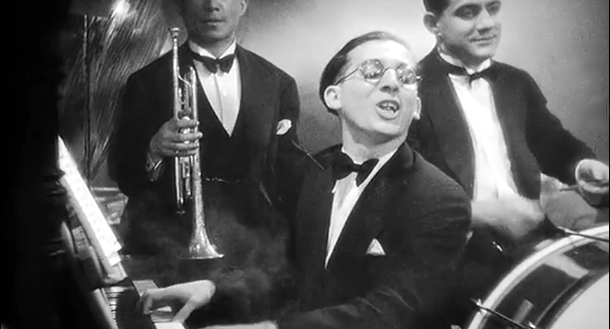 Some cast members still make connections with film fans, ninety years later. Fritz Lang followers may recognize leading leady Lien Deyers, a real looker who here must play ‘the girlfriend’ offering amorous support but not much practical assistance. Deyers is famed as a secret agent in Lang’s great Spione — where she also goes by the name ‘Kitty.’ The boss man in the ‘White Vest club room is none other than composer Friedrich Hollaender, leading a sing-along. Creatively attached to Marlene Dietrich, Hollaender also came to the U.S.A and plays piano for Dietrich in Billy Wilder’s A Foreign Affair. He also has a cameo in Wilder’s One, Two, Three. If that’s not enough, the famous composer Franz Waxman gets a bit playing piano in the nightclub where Hans and Kitty meet. ↑

Leading man Heinz Rührmann played light comedy for the next sixty years, eventually on TV. His standard character was often sweet and passive, sort of a ping-pong ball for whatever odd events come along. We’ve seen him as an innocuous guy gifted with the ability to walk through walls in the 1959 Sci-fi comedy entitled, what else, Ein Mann geht durch die Wand (The Man Who Walked through the Wall). 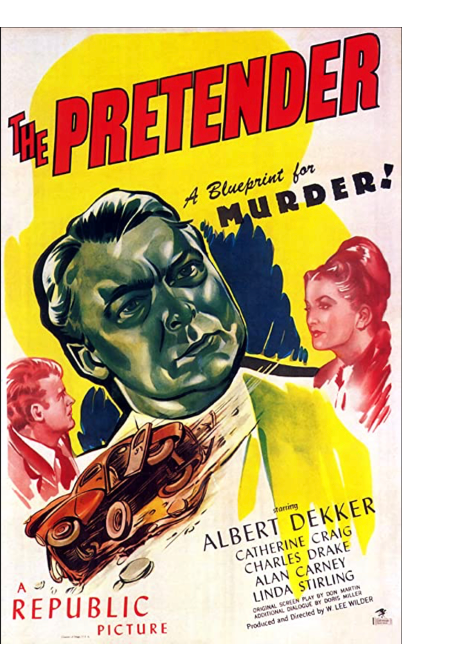 Up top I mentioned the erroneous notion that The Man in Search of his Murderer was remade as the 1949 noir D.O.A.. The Hollywood film most inspired by Der Mann, der seinen Mörder sucht would seem to be Republic Pictures’ 1947 noir obscurity The Pretender starring Albert Dekker. ←  It’s definitely not a comedy. To get out of debt, Dekker’s social climber courts a rich woman with matrimony in mind. Learning that she’s about to marry a rival, he takes out a contract on the man’s life. But when the bride-to-be marries our dastardly villain instead, Dekker can’t call off the hit — just as in this film, the murder contract has been passed on to an unknown third party.

Making the connection even more interesting is that the producer-director of The Pretender is W. Lee Wilder — Billy Wilder’s older brother. Whenever he was asked about his brother’s less-successful producing and directing career, Billy Wilder had nothing pleasant to say. I wonder if swiping this old story idea had something to do with it.

The Kino Classics Blu-ray of The Man in Search of his Murderer is a decent, good-looking encoding of a restoration done by the Friedrich-Wilhelm-Murnau-Stiftung and the Deutsche Kinematek-Museum für Film und Fernsehen. The version on view is not the original 97-minute release but a reissue version clocking in at only 53 minutes, with the title Jim, der Mann mit der Narbe (Jim, the Man with the Scar). It doesn’t seem possible that the show ever could have been almost twice as long. We’d be willing to believe that the longer running time is a typo from deep in the past.

The show seems restored-rescued from some kind of surviving print, basically in fine shape but of course not looking pristine. The audio is quite decent.

Some but not all of the questions about The Man in Search of his Murderer are answered in Josh Nelson’s feature audio commentary. We learn that Erich Pommer’s show was a bona-fide flop upon release. That makes complete sense if the original running time was indeed more than half an hour longer — the premise barely holds up for the length it is now. Were Berliners not ready for edgy Black Comedy, or did something else about the show put them off?

Josh Nelson reports that brothers Robert and Curt (Kurt) Siodmak were at each other’s throats even at this time. Both Robert Siodmak and Billy Wilder are a long way from their American triumphs, directing clever stories with surprise twists. It’s not hard to imagine Wilder in a pitch session for Man in Search of his Murderer, trying to slip his wicked ideas into the movie. Wilder would rack up a number of writing credits before fleeing Germany when the Nazis came to power. He found a way to get his personal mark on everything he did … the funny, adventurous Emil and the Detectives and his French film in exile, Mauvaise Graine. Thirty years later some critics would type Wilder as a cynical misanthrope for including scenes of attempted suicide in his movies, even the comedies. We wonder if Berlin in 1931 also thought Der Mann, der seinen Mörder sucht was in bad taste.