Ivan Tors and Curt Siodmak ‘borrow’ nine minutes of dynamite special effects from an obscure-because-suppressed German sci-fi picture, write a new script, and come up with an eccentric thriller where atom scientists behave like G-Men crossed with Albert Einstein. The challenge?  To make a faceless unstable atomic isotope into a worthy science fiction ‘monster.’ 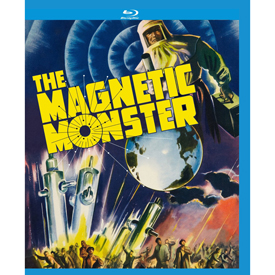 How did we ever survive without an “Office of Scientific Investigation?” In the early 1950s, producer Ivan Tors launched himself with a trio of science fiction movies based on that non-existent government entity, sort of an FBI for strange scientific phenomena. As of this writing, Kino has released a terrific 3-D Blu-ray of the third entry, 1954’s GOG. The second Tors OSI mini-epic is the interesting, if scientifically scrambled Riders to the Stars, which shows up from time to time on TCM but has yet to find its way to home video in any format.

The first of the series, 1953’s The Magnetic Monster is considered the most scientifically interesting, although it cheerfully promotes its own laundry list of goofy notions about physics and chemistry. As it pretends that it is based on scientific ideas instead of rubber-suited monsters, Tors’ abstract threat is more than just another ‘thing’ trying to abduct the leading lady. Exploiting the common fear of radiation, a force little understood by the general public, The Magnetic Monster invents a whole new secret government bureau dedicated to solving ‘dangerous scientific problems’ — the inference being, of course, that there’s always something threatening about science. Actually, producer Tors was probably inspired by his partner Curt Siodmak to take advantage of a fantastic special effects opportunity that a small show like Magnetic could normally never afford. More on that later. The script plays like an episode of Dragnet, substituting scientific detectives for L.A.P.D. gumshoes. Top-kick nuclear troubleshooter Dr. Jeff Stewart (Richard Carlson) can’t afford to buy a tract home for his pregnant wife Connie (beautiful Jean Byron, later of The Patty Duke Show). He is one of just a few dauntless OSI operatives standing between us and scientific disaster. When local cops route a weird distress call to the OSI office, Jeff and his Phd. sidekick Dan Forbes (King Donovan) discover that someone has been tampering with an unstable isotope in a room above a housewares store on Lincoln Blvd. Every metallic object in the store has become magnetized. The agents trace the explosive element to one Dr. Serny (Michael Fox), whose “lone wolf” experiments have created a new monster element, a Unipolar watchamacallit sometimes referred to as Serranium. If not ‘fed’ huge amounts of energy this new element will implode, expand, and explode again on a predictable timetable. Local efforts to neutralize the element fail, and an entire lab building is destroyed. Dan and Jeff rush the now-larger isotope to a fantastic Canadian “Deltatron” constructed in a super-scientific complex deep under the ocean off Nova Scotia. The plan is to bombard the stuff with so much energy that it will disintegrate harmlessly. But does the Deltatron have enough juice to do the job?  A Canadian bureaucrat tries to halt the procedure just as the time limit to the next implosion is coming due!

Sincere, likeable and quaint, The Magnetic Monster is nevertheless a prime candidate for chuckles, thanks to a screenplay with a high clunk factor. Big cheese scientist Jeff Stewart interrupts his experimental bombardment of metals in his atom smasher to go out on blind neighborhood calls, dispensing atom know-how like a pizza deliveryman. He takes time out to make fat jokes at the expense of the lab’s switchboard operator, the charming Kathleen Freeman. The OSI’s super-computer provides instant answers to various mysteries. Its name in this show is the acronym M.A.N.I.A.C.. Was naming differential analyzers some kind of a fetish with early computer men? Quick, which ’50s Sci-fi gem has a computer named S.U.S.I.E.?

The strange isotope harnesses a vague amalgam of nuclear and magnetic forces. It might seem logical to small kids just learning about the invisible wonder of magnetism — and that understand none of it. All the silverware at the store sticks together. It is odd, but not enough to cause the sexy blonde saleswoman (Elizabeth Root) to scream and jump as if goosed by Our Friend the Atom. When a call comes in that a taxi’s engine has become magnetized, our agents are slow to catch on. Gee, could that crazy event be related to our mystery element? When the culprit scientist is finally tracked down and pulled off an airliner, he’s already near death from overexposure to his own creation. We admire Dr. Serny, who after all managed to create a new element on his own, without benefit of a billion dollar physics lab. He also must be a prize dope for not realizing that the resulting radiation would kill him. The OSI troubleshooters deliver a stern lesson that all of us need to remember:  “In nuclear research there is no place for lone wolves.” If you think about it, the agency’s function is to protect us from science itself, with blame leveled at individual, free-thinking, ‘rogue’ brainiacs. (Sarcasm alert.) The danger in nuclear research comes not from mad militarists trying to make bigger and more awful bombs; the villains are those crackpots cooking up end-of-the-world scenarios in their home workshops. Dr. Serny probably didn’t even have a security clearance!

The Magnetic Monster has a delightful gaffe in every scene. When a dangerous isotope is said to be ‘on the loose,’ a police radio order is broadcast to SHOOT TO KILL … Shoot what exactly, they don’t say. This line could very well have been invented in the film’s audio mix, if producer Tors thought the scene needed an extra jolt.

Despite the fact that writer-director Curt Siodmak cooked up the brilliant concept of Donovan’s Brain and personally invented a bona fide classic monster mythology, his ’50s sci-fi efforts strain credibility in all directions. As I explain in the Gold review, Siodmak may have been the one to come up with the idea of repurposing the climax of the old film. He was a refugee from Hitler’s Germany, and had written a film with director Karl Hartl. Reading accounts in books by Tom Weaver and Bill Warren, we learn that the writer Siodmak had difficulty functioning as a director and that credited editor Herbert Strock stepped in to direct. Strock later claimed that the noted writer was indecisive on the set.

The truly remarkable aspect of The Magnetic Monster comes in the last reel, when Jeff and Dan take an elevator ride way, way down to Canada’s subterranean, sub-Atlantic Deltatron atom-smasher. They’re suddenly wearing styles not worn in the early ‘fifties — big blocky coats and wide-brimmed hats. The answer comes when they step out into a wild mad-lab construction worthy of the visuals in Metropolis. A giant power station is outfitted with oversized white porcelain insulators — even a set of stairs looks like an insulator. Atop the control booth is an array of (giant, what else) glass tubes with glowing neon lights inside. Cables and wires go every which-way. A crew of workers in wrinkled shop suits stands about like extras from The Three-Penny Opera. For quite some time, only readers of old issues of Famous Monsters of Filmland knew the secret of this bizarre footage, which is actually from the 1934 German sci-fi thriller Gold, directed by Karl Hartl and starring Hans Albers and Brigitte Helm. Tors and Siodmak do their best to integrate Richard Carlson and King Donovan into this spectacular twenty-year-old stock footage, even though the extravagant production values and the expressionist patina of the UFA visuals are a gross mismatch for The Magnetic Monster’s ’50s semi-docu look.

Jeff’s wide hat and David Byrne coat are there to make him look more like Hans Albers in the 1934 film, which doesn’t work because Albers must be four inches taller and forty pounds beefier than Richard Carlson. Jeff climbs around the Deltatron, enters a control booth and argues with the Canadian scientist/turnkey, who is a much better match for the villain of Gold. Jeff changes into a different costume, with a different cap — so he can match Albers in a different scene in Gold. The exciting climax repurposes the extravagant special effects of Otto Hunte and Günther Rittau, changing the original film’s attempted atomic alchemy into a desperate attempt to neutralize the nasty new element before it can explode again. The matching works rather well for Jeff’s desperate struggle to close an enormous pair of bulkhead doors that have been sabotaged. And a matched cut on a whip pan from center stage to a high control room is very nicely integrated into the old footage. The bizarre scene doesn’t quite come off… even kids must have known that older footage was being used. In the long shots, Richard Carlson doesn’t look anything like Hans Albers. A fuel-rod plunger in the control room displays a German-style cross, even though the corresponding instrument in the original show wasn’t so decorated. Some impressive close-up views of a blob of metal being bombarded by atomic particles are from the old movie, and others are new effects. Metallurgy is scary, man.

The “Serranium” threat establishes a pattern touched upon by later Sci-fi movies with organic or abstract forces that grow from relative insignificance to world-threatening proportions. The Monolith Monsters proposes giant crystals that grow to the size of skyscrapers, threatening to cover the earth with a giant quartz-pile. The Sam Katzman quickie The Day the World Exploded makes The Magnetic Monster look like an expensive production. It invents a new mineral that explodes when exposed to air.

The supporting cast of The Magnetic Monster gives us some pleasant, familiar faces. In addition to the beloved Kathleen Freeman is Strother Martin as a concerned airline pilot. Fussy Byron Foulger owns the housewares store and granite-jawed Frank Gerstle (Gristle?) is a gruff general. The gorgeous Jarma Lewis has a quick bit as a stewardess.

The KL Studio Classics Blu-ray of The Magnetic Monster is a fine transfer of this B&W gem from United Artists. Once hard to see, it was part of an expensive MGM-Image laserdisc set twenty years ago and then an MOD DVD in 2011. The disc comes with a socko original trailer that explains why it did reasonably well at the box office. Every exciting moment is edited into a coming attraction that really hypes the jeopardy factor. At that time, just the sight of a hero in a radiation suit promised something unusual. Nowadays, Hazardous Waste workers use suits like that to clean up common chemical spills.

The commentary for The Magnetic Monster is by Fangoria writer Derek Botelho, whose name is misspelled as Botello on the disc package. I’ve heard Derek on a couple of David del Valle tracks for Vincent Price movies, where he functioned mainly as an Ed McMahon-like fan sidekick. His talk tends to drift into loosely related sidebar observations. Instead of discussing how the movie was made by cannibalizing another, he recounts for us the comedy stock footage discovery scene from Tim Burton’s Ed Wood. Several pages recited from memoirs by Curt Siodmak and Herbert Strock do provide useful information on the film. Botelho appreciates actress Kathleen Freeman. You can’t go wrong doing that.

Viewers that obtain Kino’s concurrent Blu-ray release of the original 1934 German thriller Gold will note that the repurposed scenes from that film look much better here, although they still bear some scratches.