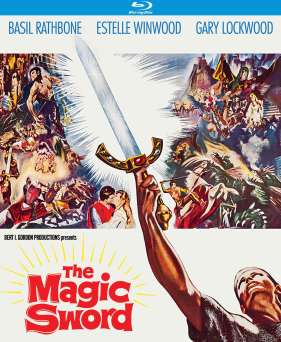 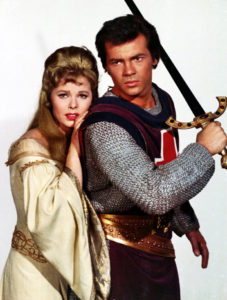 Fresh off producing and directing Tormented, a mildly lurid psychological shocker released in 1960, Bert I. Gordon pointed his next film in the direction of the Saturday matinee crowd, a select audience of thrill crazy adolescents who made box office bonanzas out of phantasmagorical entertainments like 7th Voyage of Sinbad. As with most (all?) of Gordon’s work, his eyes were too big for his stomach – the 1962 fairy tale called for Sinbad-sized thrills but Gordon was working with a fraction of Ray Harryhausen’s budget and a two week shooting schedule. If nothing else the director was determined to put up on the screen what was promised on the poster, “The Most Unbelievable Sights Ever Seen” but once again, Mr. Big came up short. 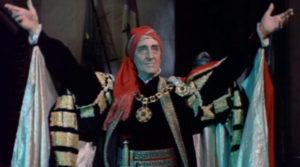 In the run-up to its release the movie suffered several title changes including St. George and the Dragon and St. George and the Seven Curses before settling on the prosaic but marquee-friendly title, The Magic Sword. Gary Lockwood plays the up-and-coming saint as an impetuous teenager, a highly fictionalized version of the very real Roman military man who died in 303. Estelle Winwood is his ditzy mother Sybil, an addlepated witch and Basil Rathbone is the turbaned fly in the ointment, the supercilious sorcerer Lodac.

The script was by Phantom Lady scribe Bernard Schoenfeld who followed a template favored by a battalion of writers before him – a comely princess is spirited away by a malignant force and the hero jumps to her rescue. This time the princess is played by the fleshy starlet Anne Helm, first seen enjoying an early morning skinny dip while bobbling like an inflatable pool toy. It’s a shot that looks more Russ Meyer than Ray Harryhausen while offering a preview of the risqué right turn Gordon’s career took in 1982 with the soft core shenanigans of Let’s Do It! 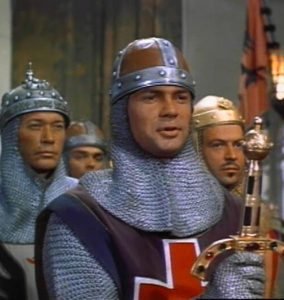 George recruits six trustworthy knights to assist him in the search for the princess, all of them from the four corners of the earth – Ireland, Germany, Italy – and each with a preposterous accent that might have inspired John Cleese’s profoundly eccentric performance in Holy Grail – “Ah’m French!  Why do you think I have this out-rrrageous accent, you silly king?!”

The valiant seven are forced to cross through a hostile terrain cursed by Lodac (mostly the peaks and valleys of Bronson Canyon) and the path is lined with pitfalls, a towering ogre (Paul Frees provides the growls), a fiery pit and a hag with a face like the La Brea tar pits (played by an unrecognizable Vampira – Maila Nurmi.) Each battle is won but George’s already meager army thins out after each victory leaving only our armor-clad hero to tackle the final “curse” – the monster that fueled so much excitement on schoolyards when a publicity photo showed up in the August 1961 issue of Famous Monsters of Filmland – Lodac’s dragon. 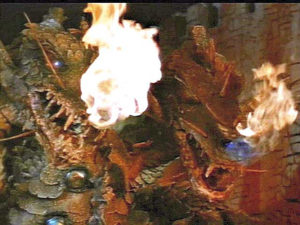 Though Gordon and his wife Flora are credited with special visual effects it’s prop maker Ray Wheat who’s listed as “dragon trainer” and he did a bang up job; thanks to some slick matte work the creature appears to be an impressively intimidating opponent for George, belching fire and roaring like a champion – and it looks great in stills. But on film the lumbering beast doesn’t even lumber – it’s nearly stationary, as action-filled as a still life.

The dragon is slain but a curse hangs over the movie more daunting than any dreamed up by Lodac – The Magic Sword is haunted by its budget at every turn – the low rent court of the king, the threadbare studio sets – let alone the less than artful work of its own director. And the actors, aside from Lockwood (who manages not to embarrass himself) and stalwart pros Winwood and Rathbone, aren’t any more convincing than that dragon. 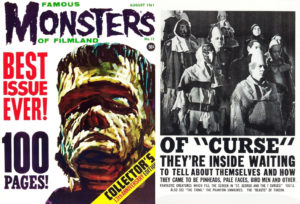 The kids carousing in the front row didn’t mind – they may have been throwing their popcorn but it wasn’t at the screen. Gordon and Schoenfeld had enough wit to time the appearance of each monster at the right intervals and a few of them, the one-eyed hag and the literally blistering death of two of the knights, are memorably grisly. Equally creep-inducing is the gallery of freaks that populate Lodac’s rumpus room, a weird assortment of, in the words of Forry Ackerman, “pinheads, pale faces and birdheads.” The work of Daniel C. Striepeke, those make-ups added much needed color to the low rent production design. Striepeke was just at the beginning of a long career which included Saving Private Ryan and The Deer Hunter.

Kino Lorber’s presentation of The Magic Sword and Paul Vogel’s cinematography is lovely (Vogel knew his way around fantasy, he shot The Time Machine and The Wonderful World of the Brothers Grimm). Along with the extras is a deep-dig commentary from Tim Lucas and Larry Blamire shot through with astute observations and the inevitable nostalgia.

Special thanks to a trusted correspondent for this American Cinematographer article on Gordon’s camera tricks.