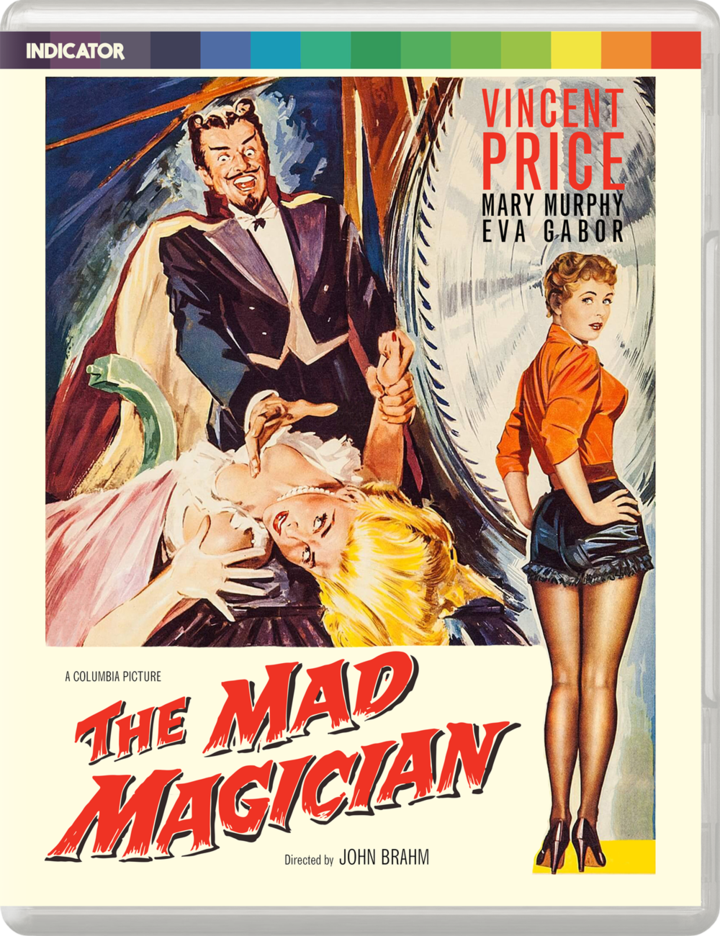 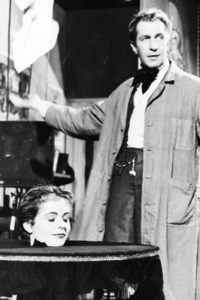 For Vincent Price, revenge was a dish served cold and in 3-D. In 1954, just a year after his three-dimensional rampage in Andre DeToth‘s House of Wax, the actor returned in a virtual remake – the budget was lower and the black and white imagery couldn’t hold a candle to the rich WarnerColor but John Brahm’s The Mad Magician scares up some legitimate in-your-face fun.

Price plays Don Gallico, an undervalued inventor at Illusions, Inc., a full service shop for professional prestidigitators. It’s a dead end job in more ways than one and his newest creation could give him the break he’s waited for. His biggest obstacle is his own boss, a Dickensian villain named Ross Ormond (Donald Randolph) who’s managed to strip his hapless employee of everything – including his wife. When Ormond lays his hands on Gallico’s latest brainchild, an elaborate buzz saw contraption, it’s too much for the mild-mannered apprentice – the worm turns and treats his tormentor to a grisly demonstration of just how well that buzz saw works. 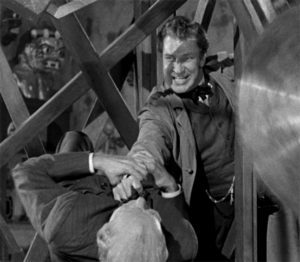 Gallico’s revenge, though satisfying, has some pretty messy results and so, disguised as Ormond, he makes his way to a nearby pep rally to dispose of the evidence atop a towering bonfire. It’s a recreation of a similar moment from Brahm’s own Hangover Square and he re-stages it as a fiery triumph for the newly emboldened and thoroughly mad magician – Gallico, you are avenged! With his chief antagonist reduced to cinders and a new lease on life, Gallico returns to work in the studio by day while masquerading as Ormond at night. He rents an apartment in order to maintain the facade but his landlord has other ideas – as a writer specializing in potboilers and outré murder mysteries, she has a special talent for unmasking homicidal maniacs.

There’s a reason Max Ophüls never directed a 3-D movie – three dimensional films of the 50’s were hamstrung by the slow-moving behemoths needed to photograph the illusion of depth. But working with an imaginative script from Crane Wilber, Brahm is able to shake off the shackles and conjure up a number of witty sequences including Gallico’s frantic attempts to track down Ormond’s missing head – in a classic bit of Hitchcockian bait and switch, we root for Gallico to retrieve that incriminating noggin as surely as we switch allegiances to Norman Bates in Psycho. 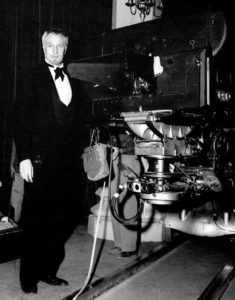 Shot by Bert Glennon, the same cinematographer who wrangled that unwieldy camera in House of Wax, The Mad Magician’s monochrome visuals are comparatively drab – though some of the blame rests with Columbia Pictures’ pre-fab studio sets (a Columbia trademark) – the precisely manicured interiors and street settings have an antiseptic look – the art director’s equivalent of plastic-covered couches. Just because a film is in black and white doesn’t mean it has to be colorless.

Fortunately the man at the center of the action could liven up a Tupperware party and he was no stranger to the third dimension – Vincent Price starred in two other films in the wake of the 50’s 3-D tsunami including Dangerous Mission in 1954 and 1955’s Son of Sinbad (though that particular Arabian burlesque show was never released in 3-D). After his barn burning performance as Henry Jarrod in DeToth’s horror show, Price seems relatively reserved as Gallico – only turning on the fireworks during the murder sprees that target not only Ormond but Eva Gabor as his gold-digging ex and the amusingly arch John Emery as The Great Rinaldi, an unscrupulous magician who gets an uncomfortably close look at Gallico’s latest trick – a crematorium on wheels that reduces its occupant to ashes. That Gallico himself would meet the same fate in the predictable finale seems, after all he’s been through, a little cruel. 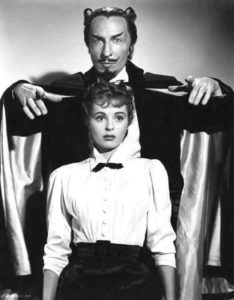 Indicator’s Blu ray contains, as usual with their product, a plethora of excellent supplements – they include:

Three-Dimensional Magic  – a new documentary on The Mad Magician and the 3-D explosion of the 1950s with cinematographer Frank Passingham (Kubo and the Two Strings) and archivist Tom Vincent (presented flat and in 3-D).

Super 8 versions of the film in anaglyphic 3-D

An exhaustive image gallery and the film’s original theatrical trailer

The package also contains an exclusive 40-page booklet with a new essay by Kat Ellinger, a look at the career of producer Bryan Foy, an archival interview with director John Brahm by David Del Valle, a guide to the promotional campaign, an overview of contemporary critical responses and Jeff Billington on The Three Stooges