They don’t make ’em like this any more, and the original TV spots for James Gray’s accurate retelling of history almost didn’t know how to sell it. Charlie Hunnam spends his life trying to solve a riddle of the Peruvian rainforest, in between fighting in WW1 and dealing with class prejudice. Yup, one could say the picture was filmed in a ‘classic’ style . . . can a show like that find an audience these days? 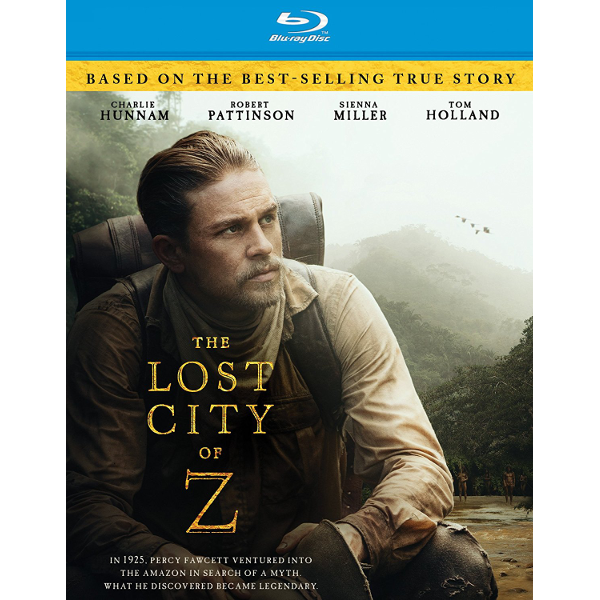 More than one critic has described James Gray’s The Lost City of Zas being made in a ‘classic’ mode, which is true enough; compared to new pictures it feels like a welcome throwback. It’s a period picture about true events from the 1910s and ’20s. Grand exploration narratives left the movies ages ago; the last one I remember getting good reviews but only so-so attendance was Bob Rafelson’s The Mountains of the Moon back in 1990. The truth is that in most cases audiences would rather see non-historical escapist pictures, fantasies free of nagging ‘downer’ issues like colonial history. Almost forty years ago Werner Herzog made a couple of movies in South America. The physical problems of working in the rain forests were daunting, but were dwarfed by the political and tribal difficulties. One of the more amusing scenes in The Lost City of Z has James Gray recreating a situation straight from Herzog’s Fitzcarraldo. It’s so close that we almost expect Klaus Kinski to appear.

In the first decade of the 20th century, Percy Fawcett (Charlie Hunnam) is an ambitious officer in the English Army with little chance for advancement. His record is excellent, but even after a flashy win in a regimental deer hunt his superiors lament that he’s not from a good family, and that his soldier father was a drunkard. Fawcett is instead lent out to the Royal Geographic Society to map a disputed border between Peru and Brazil, which will help stabilize the rubber trade. On the way he contacts his aide-de-camp Henry Costin (Robert Pattinson) and they form a lifelong friendship. Their initial trip into the perilous Amazon region serves its purpose. Fawcett comes back a hero, but the scientific establishment scoffs when he claims that he saw evidence of a lost civilization in the jungle, a place he calls ‘Zed.’ Meanwhile, Fawcett’s dutiful wife Nina (Sienna Miller) has been stuck at home raising his children, not knowing if he’ll come back alive. A highly independent woman, Nina tries to get Percy to let her be part of the next attempt to learn the secrets of the rainforest. But he leaves with Henry and a new team member James Murray (Angus Macfadyen), a wealthy man who had taken part in the amazing Shackleton expedition to Antarctica. 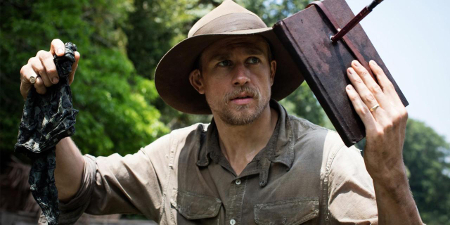 The Lost City of Z is the exact opposite of jolly escapist adventures like MGM’s film of H. Rider Haggard’s King Solomon’s Mines. It’s a realistic spin on the life of an explorer at the end of the Golden Age of Exploration, before technology began to lessen the severity of the risks involved. Percy Fawcett makes proving his thesis the only goal in his life, and to that end he returns twice to South America, with great time gaps that include an interruption to fight in the trenches of WW1. By the time he can make a third trip, his son born on the first expedition Jack (Tom Holland) is old enough to accompany him.

The ‘classic’ angle is that Lost City is told without contemporary embellishments or cinematic tricks. We learn about the characters from what they say to each other, not through flashbacks or other contrivances. For the most part the camerawork is on the ground with the explorers, not flying through the skies or doing other CGI tricks — Fawcett’s party is stuck where they happen to be and we’re stuck with them. About the only concession to modern taste is the elimination of ‘time & distance’ montages. Instead of spinning newspapers and stock shots of mission prep and travel, all but one of the expeditions begins with a hard cut from England to the rainforest.

Most refreshingly, events and people are not put through a modern filter. Nina shouts that she shouldn’t be locked up while her husband has the exciting life, but her words do nothing. Percy Fawcett may have progressive ideas about helping to preserve primitive peoples but is as traditional as they come where marriage is concerned. The natives Fawcett encounters are never predictable. One tribe ambushes them from the riverbank but another becomes tentative friends. Fawcett has luck but also the grit and determination needed to succeed — he must put down disputes among his mates, some of whom go insane. This natural leader is capable of handling most anything, except James Murray, who simply can’t handle the stress of the jungle. When Murray eventually cracks up and sabotages the expedition, Fawcett must do something. Back in England, Murray brings charges against the expedition leader, and class injustice again becomes an issue. It is years before Percy Fawcett’s version of events is accepted. 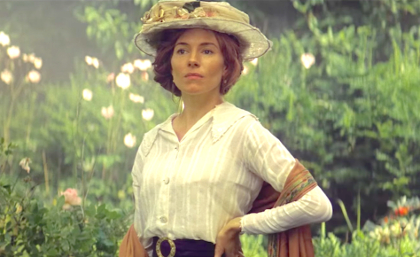 In this day and age of plainly stupid cookie-cutter movies, with infantile power fantasies (usually martial) dominating film fare, it seems wrong to criticize The Lost City — it is intelligent, impeccably produced and makes us question some of our assumptions about so-called noble exploration. Its exciting moments include a very credible piranha attack, yet it doesn’t pander by delivering an exaggerated action scene every 7.5 minutes.

Only logic tells us that we must be seeing plenty of digital effects — the credits show that scenes were enhanced but I’d say that few were faked outright. I suppose that the CGI work contributes quite a bit to shots of teeming London streets. Can a new CGI movie just plug actors into existing street scenes purchased as stock footage? The show doesn’t try to make Eastern Peru look like a CG wonderland. The most grandiose scenery we see is a waterfall, and it’s not one of those amazing South American things that are five times bigger than Niagara. The production instead concentrates on telling details that make us think about how difficult an expedition back then must have been. We think about how difficult it must have been to haul heavy boxes of provisions tens of miles through the rainforest – when Murray destroys them, a really severe penalty would surely be justified.

The film has a lot of exposition to get across, and some of it is not the best. Altogether too much dialogue in England seems ‘on the nose,’ in ways that a classy screenplay from the 1940s would avoid. Brit officers discuss Fawcett’s shortcomings for advancement as if reading from his biography. Also, although Percy Fawcett has plenty of admirable qualities, he’s also single-minded, sometimes even dull. He and Henry Costin share a few laughs, but the general rule is that both are always on task. The family scenes are believable but not particularly exciting; all of the expedition scenes are engrossing. The episode on the front lines in the war is interesting in that it is the first time in years I’ve seen such material without a major anti-war statement being made. The best drawing-room scenes are Fawcett’s contentious meetings with his sponsors, who think him trustworthy enough to go around the world but won’t give his word any weight against that of a man of higher social standing. One of the pompous Society masters is played by Ian McDiarmid, of the Star Wars movies.

After finding those interesting carvings and a full field of broken pottery, one might think Fawcett would bring back some samples, or take along an archeological authority the next time. Nope, the expedition members are all soldiers or professional explorers, not scientists per se. That is quite likely just the way things were often done back then. One nice touch is the expedition’s guide, a tribal fellow who has learned to speak English, and who is sold to the expedition as a veritable slave. The Indian likes Fawcett and does his job, but smiles at the knowledge that many of these white men will perish as a result of their own stupidity. He’s certainly not a sacrificing ‘Gunga Din’ character. 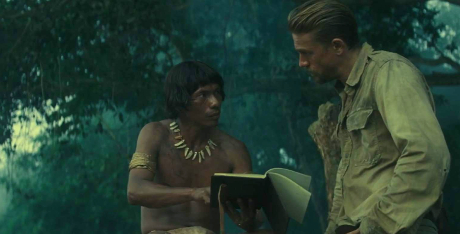 The show is well acted by a serious cast. Charlie Hunnam’s big breaks may have been hurt by his starring role in this year’s King Arthur. Nine years down the road from his Twilight role as a teen-dream vampire, Robert Pattison also has yet to break through completely. I was very impressed by Tom Holland in 2012’s The Impossible; he’s of course the new Spiderman. Sienna Miller has been averaging three pictures a year for quite a while, which is certainly impressive. Angus Macfadyn is wholly believable as the wrong guy to take on a risky mission.

When push comes to shove The Lost City of Z revives the old Latin-American literary theme of La Selva, the impenetrable jungle that in one way or another defeats or devours any outsider who dares to enter. Often the whites have nefarious motivations, but not necessarily — I once saw an excellent Peruvian movie called La muralla verde (The Green Wall) (1969), which showed no mercy to a peaceful family trying to make a go of it in a town in the interior. Percy Fawcett is a decent man with noble intentions, but he’s still in danger of being in the wrong place at the wrong time.

The finale of The Lost City works in a taste of Peter Weir-like spiritual irony, and an additional bit of magic realism. The finale of the third expedition is pretty strange, almost like the finish of Barbet Schroeder’s now-obscure but riveting Borneo exploration drama The Valley (Obscured by Clouds). The conclusion back in England is exceedingly tasteful, and perhaps too subdued for general audiences, who might not even catch James Gray’s evocative visual conceit. The picture is reserved and literal until the finish, which introduces just a touch of the surreal.

The engaging show certainly offers variety — I’d say only about half of it plays out in the rainforest. James Gray’s clear and intelligent screenplay keeps the characters at arms’ length, which limits our emotional involvement. But it’s a fine picture, and we never feel cheated. 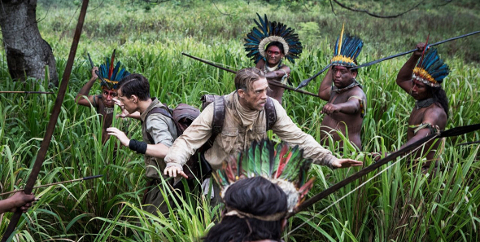 Broadgreen and Amazon Studios’ Blu-ray of The Lost City of Z will surely be the way a lot of viewers catch up with James Gray’s exploration epic. Reportedly shot on film, the images mark a nice compromise between docudrama realism and period-picture stylization. The rich soundtrack doesn’t fill the jungle with music. Sometimes the relative silence reminds us that a rainforest is not a place for a casual picnic.

The disc has everything a viewer needs to learn about the film, and the underlying historical events behind its story. Three fairly informative featurettes cover the source book, the adventure of filming in the real Orient of Peru. Fawcett was somehow able to send and receive messages while in the jungle — publicity ‘news from the field’ was very important to the Society’s funding, and while in the middle of one trip, they were scooped by another explorer’s discovery of the ancient city of Macchu Picchu up in the Peruvian mountains. As Peru has been nibbling away at its neighbors’ territory for over 200 years, the notion that an expedition might be sent to establish a border sounds very credible.