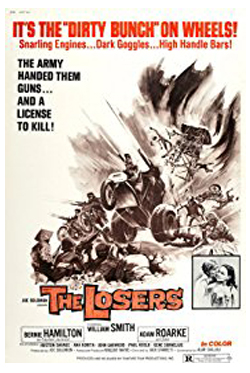 Inspired by an overture from Hell’s Angels’ Sonny Barger to President Johnson offering up his boys as “gorilla fighters”, director Jack Starrett and screenwriter Alan Caillou serve up quite the grindhouse mish-mash in this 1970 rarity. A brave biker gang plows into Vietnam on a rescue mission – straddling specially rigged motorcycles with armor and special weaponry, the wanna-be Rambos spend the next 95 minutes mowing down commies and popping wheelies. Later retitled as Nam’s Angels.