Someone save Judith Hearne, for she can’t save herself. Jack Clayton’s film of Brian Moore’s novel has stunning performances by Maggie Smith and Bob Hoskins — but whew, for many of us its social cruelties will feel like traumatic emotional abuse. Not enough nasty people and clueless victims in your life? … this show will give you your fill. 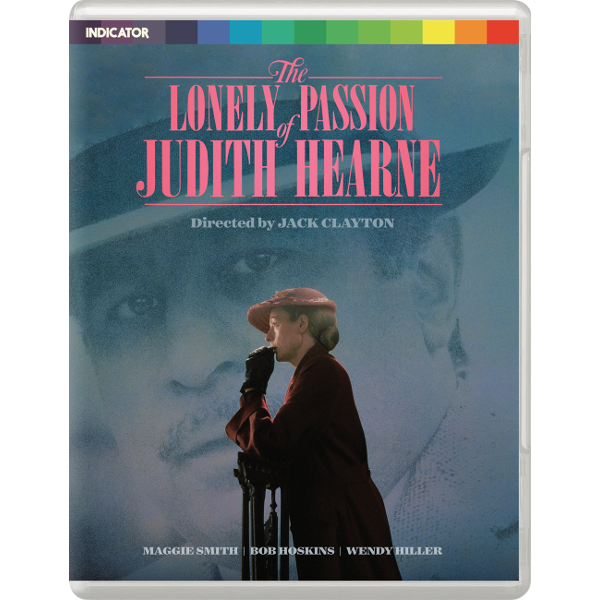 Fine acting doesn’t get finer than that seen in The Lonely Passion of Judith Hearne, a book adaptation directed by the gloomy Jack Clayton. I remember liking Smith in Travels with my Aunt, where she played a maiden Aunt. That was almost fifty years ago, and her only difficulty was looking young enough to play a teenager in the flashbacks. She played the spinster Judith Hearne a full 32 years ago, when more or less the appropriate age for the part. We’re about to see Ms. Smith in a feature version of her Downton Abbey TV series. She must be the youngest 85 year-old on the planet. “An unlikely relationship based on love, faith, and a little deception.”

Those eleven words form the most deceptive ad tagline of the 1980s, priming audiences for light entertainment that just isn’t on the menu. The Lonely Passion of Judith Hearne is an emotional meat grinder that gives us a brutal look at a blighted, smothered life. The experience reminds me of 10 Rillington Place, a well-made movie about villains so awful and victims so pathetic — on a fundamental level — that it makes one want to give up on humanity altogether. If you’ve ever been even slightly insecure socially, Judith Hearne will make you cringe.

Director Jack Clayton is no stranger to stories about oppressive, suffocating lives. Miss Judith Hearne (Maggie Smith) moves into a cheap boarding house, and does her best to put on proud and proper airs about her ‘circumstances.’ The small-minded landlady Mrs. Rice (Marie Kean of Ryan’s Daughter patronizes Judith with empty niceties. Rice’s other paying tenants, include a miserable, perpetually angry schoolteacher. Ms. Kean boards two relatives in the house as freeloaders. Her thoroughly unpleasant, nasty son Bernard (Ian McNeice) claims to be working on ‘an epic poem’ but concentrates on bedding the serving girl Mary (Rudi Davies). She lives in an attic nook and looks forward to Bernard’s visits, even though he comes on like a cross between a bloated cherub and a pasty grub worm. The other relative is Mrs. Rice’s brother James Madden (Bob Hoskins), who has returned from the U.S. after thirty years. James plays the ‘important relation’ while living off her generosity and casting about for ‘business opportunities.’

James takes one look at the expensive rings on Judith’s hand, and begins courting her. The pathetic, romantically vulnerable Judith spins into fantasies of a husband and lover. James has no idea that Judith is a pauper. She has spent much of her life taking care of her Aunt D’Arcy (Wendy Hiller), a commitment that caused her to lose her shot at a career outside the house where she might meet a Mister Right. Now Judith has a chronic drinking problem, which in Dublin of 1950 marks a woman as unfit company, a slattern. The fragile Judith is unprepared for the volleys of disillusion coming her way, not only from the thoughtless, selfish James, but also from Mrs. Rice and Bernard, who use her friendship with James to destroy what little reputation and pride she has.

The true misery of The Lonely Passion is that Judith is as much the architect of her downfall as are her closed-minded associates. In flashbacks we see her abused by her Aunt, even as she tries to take care of her; a maid-helper got her started on drinking wine as an escape valve. The gossip has already done its damage; she shows up to teach piano and is treated horribly by a housewife who won’t even let her in to see her young pupil. Judith’s relative innocence is no excuse, as she’s too obtuse to pick up on James’s clumsy tricks and Mrs. Rice’s stealth insults. Her devout Catholicism also a sad comment: when she expresses her anger at being betrayed by her beloved Jesus, Father Quigley (Alan Devlin) lashes back with an authoritarian lecture.

In other words, Judith’s ‘passion’ is not just her dream for a love life, but also her suffering on a Dublin version of the Calvary path.

Judith visits her friend Moira O’Neill, the only charitable good person in the story. Actually, a pair of nuns are sincerely sweet as well, but Moira is interesting because she remains loyal and concerned, even as Judith squanders their friendship. But Judith is oblivious to the snickering nastiness of Moira’s children, who make faces at her behind her back. I’m reminded of the poor put-upon woman in James Joyce’s story “Clay,” in Dubliners, except that Judith Hearne is less deserving. Robert Shaw’s character in author Brian Moore’s The Luck of Ginger Coffey is seemingly a combination of Judith and James — the well-meaning but unrealistic Ginger Coffey repeatedly scuttles his own efforts to get ahead with terrible decisions.

In general, I find the Jack Clayton stories about oppressed women a difficult slog; I have no trouble with tales of other kinds of suffering, but the kind of painful social miseries on exhibit in The Pumpkin Eater, Room at the Top and Our Mother’s House just feel too defeatist. The palpable ordeal suffered by Deborah Kerr takes the horror-classic fun out of The Innocents for me as well. Kerr’s Miss Giddens has some qualities in common with Judith Hearne, especially the fact that both are hungry for sensual experience denied them by a constricting society.

The acting is superb on all counts, with nobody asking for unearned sympathy for these characters. Bob Hoskins’s James isn’t a bad man, but he’s so dense that, after destroying Judith once, he returns with the exact same stupid misconception that caused the trouble in the first place. Mrs. Rice’s boarding house is a perfect storm of malignant personalities, which can be all too common in societal rungs lacking hope and opportunity. They may be the products of their environment, yet we’d be grateful if the show were retitled ‘Once Upon a Time in Dublin,’ so that Judith could strangle them all in their beds.

Maggie Smith is actually playing her approximate age in this show, 52. She of course looks righteously ancient now, but the years fall away the moment she smiles. Wendy Hiller is impressively effective in a relatively small role. The Aunt’s senile tantrums seem very real. We all know people who literally sacrifice their lives in service to others.

I first became aware of The Lonely Passion of Judith Hearne at Cannon Film, which in 1987 controlled a lot of UK theaters and had big home video deals going with EMI and other UK film producers. From my viewpoint in marketing editorial, we ripped off scenes from the EMI video library to fashion deceptive promos for proposed Cannon features, making it look as if the film projects being sold had already been shot. Judith Hearne floated through briefly, but I think we only had VHS rights; I wonder how many outside production companies were ever even paid by Cannon.

Powerhouse Indicator’s Region B Blu-ray of The Lonely Passion of Judith Hearne is a beautiful 2K restoration (by Powerhouse) from the original negative, supervised and approved by cinematographer Peter Hannan. The miserable Cannon VHS didn’t look like this, that’s for sure. Color are rich but never ‘pretty;’ the Dublin streets look nice enough but we suspect that James is right when he says ‘there’s nuthin’ to do here.’ When they go to the show they see a sexy poster for Samson and Delilah, which embarrasses Judith but probably excites her too. The widescreen image is sharp and clear, even in the corners of those dingy rooms.

Fans of Maggie Smith & Co. will love the new half-hour documentary, with Ms. Smith eagerly singing the praises of the film and Bob Hoskins. It’s also good to see actor Ian McNeice away from his Bernard character, so as not to hate him — how many Bernards have we met in our lives, vermin that insinuate and insult and attack, and then feign abject victimhood when one tries to respond?  Neil Sinyard provides a partial commentary. The illustrated first edition insert booklet contains key writing on the film from Pauline Kael and others. A piece on author Moore answers a lot of questions: the writer left Ireland for Canada (like his character Ginger Coffey) because he felt oppressed by the Church’s stranglehold on the country.

We also learn that Moore’s book Judith Hearne was first published in 1955. We’re not surprised that it had trouble being produced, as it’s not exactly the kind of movie one leaves wearing a smile. But various directors tried to film it over the years, for an interesting gallery of actors: Katharine Hepburn, Deborah Kerr, Sterling Hayden, Vanessa Redgrave and Robert Mitchum.