It’s the formidable Bette Davis once again, in yet another superior William Wyler picture. The Somerset Maugham play is a classy vehicle for a star performance — the nagging legal ‘difficulty’ of plantation wife Leslie Crosbie is intertwined with colonial politics but remains entirely personal. Leslie isn’t exactly a poster girl for the feminist movement. Is she the victim of social pressures or just a petty, selfish monster? Screenwriter Howard Koch had to invent a twisted new ‘yellow peril’ finish to appease the Production Code … you know, the Code that some people say made Hollywood movies better. 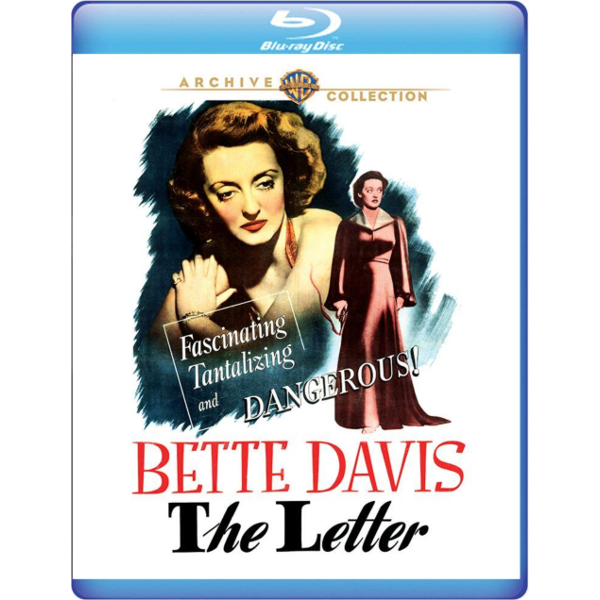 To our delight, the Warner Archive Collection is continuing its series of vintage WB restorations on Blu-ray. From James Cagney to Errol Flynn, we delighted in the first wave of DVDs of 1930s classics; older film fans once knew these movies through the so-so 16mm prints that screened on TV for fifty years, between commercials. But every time a restored title debuts on Blu, it’s like seeing a new movie. The Public Enemy and White Heat knocked us down with their clarity, and the discovery of improved printing sources made The Sea Wolf and Mutiny on the Bounty (an MGM picture, actually) a revelation. The Sea Hawk looks so good, we can finally tell when Michael Curtiz cuts to footage culled from an earlier pirate movie from the silent era. And just weeks ago, the Bette Davis / William Wyler Jezebel knocked us out. The picture looks brand new, but the soundtrack is twice as powerful as we remember.

The overachievers Davis and Wyler now return with a superlative 1940 winner, that breathes new life in HD. First produced on the stage in 1927, The Letter did well for actresses Gladys Cooper and Katherine Cornell. The once-rare 1929 early talkie version starring the legendary Jeanne Eagels was released on DVD by the Warner Archive in 2011. In its beautiful new encoding William Wyler’s The Letter resembles less a Warners star vehicle than an exotic Paramount Von Sternberg picture. Tony Gaudio’s silvery night scenes drip with tropical atmosphere. An almost supernatural tone arises from unspoken cultural rifts. It’s a toss-up whether the storyline is misogynistic or simply realistic about (womanly) human nature. The Code-required finish ends the movie on a moralistic note: one may evade the White Man’s justice but more ‘savage’ forces will rebalance the scales. Bette Davis is spectacular as a small-minded woman with a unreasoning sense of entitlement. Should we congratulate the Old Hollywood system for finding such worthy material … or did Davis have to use her tooth-and-claw infighting skills to secure such coveted roles?

In the rubber colony of Malaya, a late-night killing initiates a sensational series of events. Plantation housewife Leslie Crosbie (Davis) kills family friend Mr. Hammond during a late-evening visit, emptying her gun into his body. Husband Robert (Herbert Marshall) is dismayed to learn that Leslie was fending off a sexual attack and even more disturbed to find out that colonial law requires a full hearing of the matter. All goes smoothly until the Crosbies’ lawyer Howard Joyce (James Stephenson) receives news of a compromising letter, now in the possession of the victim’s Asian wife, Mrs. Hammond (Gale Sondergaard). Leslie’s story of attempted rape soon begins to unravel.

The Letter is a class act from one end to another. The Somerset Maugham play reinterprets the ‘colonial equation’ of privileged Anglos living in ‘native’ lands, as did many works of 20th century literature, overturning previous themes of the White Man’s Burden. The tropical atmosphere doesn’t have the airy, breezy torrid-zone feel of J. Roy Hunt’s cinematography for Jacques Tourneur’s I Walked With a Zombie. Tony Gaudio’s carefully lit night moods feel thick, oppressive. Making creative use of studio-confected moonlight, they take on a life of their own. The baleful moon casts patterns through blinds and throws telltale shadows on the ground. Almost as in a horror film, Bette Davis’ Leslie Crosbie senses the moon’s silent disapproval and ultimately obeys its call to meet her fate in the garden of her plantation house.

(This is all a spoiler, there’s no choice.)

As in a straight drawing-room drama, our basic interest is held by the spectacle of lies uncovered, the awful truth revealed, and the meting-out of a harsh justice. Leslie’s world of privilege collapses when she loses control of ‘the narrative.’ Leslie describes the fatal shooting as if recalling the details of a garden party. Her breezy self-assurance when explaining her ‘accident’ is initally taken as evidence of her innocence, but even she learns how important the truth is after seeing what her lies to her gullible husband Robert. Leslie feigns weakness when we know she’s as tough as nails. After shooting a man to death, she has no trouble cooking a full dinner before leaving to turn herself into the authorities.

Davis has the screen all to herself for two extended speeches, the faked confession and its later truthful counterpart. Although Leslie’s state of mind is the dramatic focus, Maugham’s tale could easily revolve around James Stephenson’s wonderful turn as the compromised defense attorney, Howard Joyce. Several ‘weak’ protagonists in later films noir would be men trapped by similar manipulating women, such as an assistant D.A. in The File on Thelma Jordon. When Joyce is compelled to break the law by retrieving the incriminating letter, we can see him shrink in stature. He no longer respects himself.

The original play does not have this Howard Koch- written ‘oriental vengeance’ finish, which is so vivid that it delivers Leslie Crosbie into a horror situation almost worthy of a Tod Browning story. On the surface, it’s a simply case of blackmailers that happen to be Asian. Victor Sen Yung’s opportunistic law clerk is a cagey opponent that Joyce cannot abuse, despite the man’s cultural lack of tact. We don’t see Gale Sondergaard’s Mrs. Hammond in the throes of remorse for her dead husband, only as a pitiless, ‘inscrutable’ exotic exacting a cold vengeance. The unspoken reality is that the colonial authorities will do everything possible to not punish Leslie, on the grounds that doing so might upset the established power structure. As far as the English are concerned, Hammond already has a black mark against him, for marrying an Asian woman; the formidable Ms. Sondergaard transforms Mrs. Hammond into a fiendish Dragon Lady stereotype. The racist context notwithstanding, Mrs. Hammond’s active role in the added finale is presented EXACTLY as in a horror film, playing out as if it were a supernatural curse. What will to the colonials look like demonic violence is simply justice via an older code.

(spoiler spoiler) Older writings about The Letter remind us that the Production Code demanded retribution for murder, even though plenty of Code-approved movies slipped by that rule. Not only does Leslie pay, a weak hint is given that Mrs. Hammond will not escape justice as well. Neither change spoils the power of this superior drama.

The older Jeanne Eagels version was of course a pre-Code production, that could more closely trace the contours of the original Maugham play. The Eurasian woman is simply Hammond’s lover in the original, not a wife. The 1929 early talkie finishes with the powerful theatrical climax where Leslie announces that she still loves the man she killed; Bette Davis’s take on the same moment is beautifully nuanced as a moment of profound self-realization. The main attraction is of course watching Bette Davis skillfully sculpting the character of Leslie Crosbie, who remains sympathetic even as she reveals herself to be more trouble than any man wants or needs. It does seem somewhat misogynistic that so many ‘strong’ women in older plays and movies come off as hysterical time bombs. Their self-destructive flaws originate with their female psyches, not rigid social demands, demands of course made by men. Viewers never forget the film’s opening shot, which in 1940 must have had a violent impact comparable to Bonnie & Clyde: Leslie empties the chambers of a pistol into a man, shot after shot, following him down several steps as he tries to walk away. Her cold-blooded calm is riveting — is Leslie in a trance, or what?   Just why did the man deserve the Dirty Harry treatment?  I imagine that, after seeing this scene, more than a few abusive husbands thought twice about turning their backs on their wives during heated arguments.

It’s Ms. Davis’s show all the way, but the interesting James Stephenson (Espionage Agent) shines in the next- best role, as the only white male in sight that doesn’t prejudge and pre-acquit Mrs. Crosbie. Herbert Marshall plays the uncomprehending Robert quite well, but the character is essentially passive. Any FAQ on The Letter will tell us that Marshall was in the Jeanne Eagels version as well, as the victim in the opening scene. Actor Cecil Kellaway is barely present in the movie but is given substantial billing in the cast. It looks as though The Letter went through some serious scene trimming on the way to a final cut. Gale Sondergaard haunts this film the way she does several others; her part as a fiery Eurasian spirit prompts one to imagine a ghostly Gale Sondergaard horror film, in which the striking woman returns from Blacklist Limbo to wreak vengeance on Hollywood’s red-baiting villains.

The Warner Archive Collection Blu-ray of The Letter is a luminous restoration. We saw this in beautiful 35mm back at UCLA ages ago; only now does it look as good again. All those carefully modulated night scenes, with the aforementioned moon shadows, come off as highly skilled Hollywood artifice. The shots of the moon being obscured by clouds are obvious animation, yet seem perfectly judged.

Warners’ audio fidelity jumped in quality a few years later, when their engineers perfected microphone strategies to make dialogue especially clear, and brassy orchestra notes really jump from the screen. But the improved audio track on this older show eliminates the surface hiss we remember from 16mm prints. Max Steiner’s nicely subdued score communicates mood an menace without ‘oriental’ clichés that he might use in a genre picture.

Archive discs routinely reproduce exactly what was on earlier Warners DVD releases, and this show follows the pattern. The disc carries two separate Lux Radio theater presentations, from 1941 and 1944. Both star Davis and Marshall and the first has Stephenson as well, allowing Davis fans to make close comparisons.

An interesting but mildly frustrating extra is an alternate ending sequence. It’s a replay of the entire last reel of the film, but is so similar to the standard cut that the differences might serve as a guessing game. Davis dies the same way and Sondergaard still meets up with a uniformed officer. Are the differences that slight?   Perhaps I didn’t catch something that should have been obvious (I do it all the time).

Here’s Allan Arkush on The Letter: