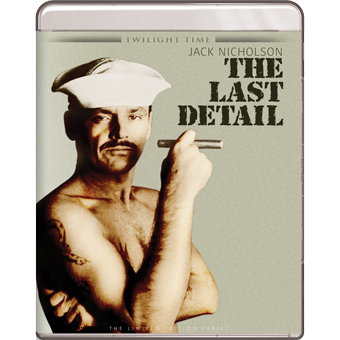 Bring up the ‘golden age’ of director-driven movies of the 1970s and the conversation will soon get around to Hal Ashby, a director who took his place alongside Michael Richie and Bob Rafelson as a maker of personal pictures with excellent performances and an independent feel. Ashby’s output wasn’t great, but it perfectly bracketed the decade. The Landlord is a sweet satire about economic inequality, while Harold & Maude persists as an eccentric cult picture. Shampoo and Bound for Glory are politically themed movies with very different styles. Ashby’s odd fantasy Being There rescued Peter Sellers briefly from a wasted decade of Pink Panther movies. The director provided great roles for many actors, from Warren Beatty to David Carradine to Diana Sands and Louis Gossett, Jr..

One of Ashby’s best is 1973’s The Last Detail, a nearly perfect road picture that showcases a trio of superb performances. Still a couple of titles away from his classic Chinatown, writer Robert Towne delivers a golden screenplay and actor Jack Nicholson runs with it. Nicholson had been doing interesting work since his breakthrough hit Easy Rider; Ashby’s film presents him at his peak as an actor. When new The Last Detail was noted for its constant swearing. The U.S. Navy on view is gritty and profane, not the squeaky-clean enlistment ad of TV’s N.C.I.S..

Sailors Buddusky and Mulhall (Jack Nicholson & Otis Young) are awaiting orders to ship out in Norfolk when they pull special duty to escort a prisoner up to a special Navy prison in Portsmouth New Hampshire. Designated shore patrol and given strict orders, they take on Meadows (Randy Quaid), a meek, shame-faced 20 year-old who faces eight years in prison plus a dishonorable discharge. Buddusky and Mulhall have been granted a week’s per diem pay for three, so their plan is to rush Meadows to the clink and have a holiday on the $ they haven’t used. When they hear Meadows’ pathetic story, their belligerence turns to sympathy, and before long they’re trying to give their charge a good time before he disappears into the hands of the brutal Marine guards up at Portsmouth. As Buddusky is a born troublemaker, their adventures range from threatening a bartender at gunpoint to trying to get Meadows laid in a brothel. Buddusky risks all their money playing darts in a bar. The trio check out a Nichiren Shoshu meeting to find out what the chanting is all about. They get drunk together. As they near their destination, the two guards grow more uncomfortable with what’s waiting for Meadows ahead. 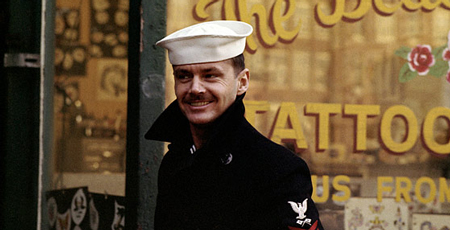 The Last Detail is the perfect ’70s director’s film – its measured pace and ‘just three guys together’ scale of action focuses on the performances. It’s the kind of show where the actors really get drunk for the drinking scenes. This is the Navy as it might be for ordinary swabbies with no career ambitions. Buddusky is ignorant and aimless and doesn’t mind staying that way; he’s just civilized enough to follow orders and keep his nose clean. The more stable Mulhall is convinced that the Navy is the best thing that’s happened to him. He’s afforded a modicum of respect and he can send money home to his mother.

The movie is a series of delightfully profane set pieces that give us a fresh view of Navy life. Poor Meadows is just a total misfit, a square peg. Given what military justice is like, there’s little point to trying to help a sailor too dumb to properly object against a grossly unfair prison sentence. When the guards find out how unjust Meadows’ deal is, they argue the issue, but not for long. Prison might be the safest place for a guy that dim. But it doesn’t really matter because they have to deliver him no matter what. The stern officer (Clifton James) who gave them the job made their mission clear: screw up and they’ll be in bigger trouble than Meadows is. 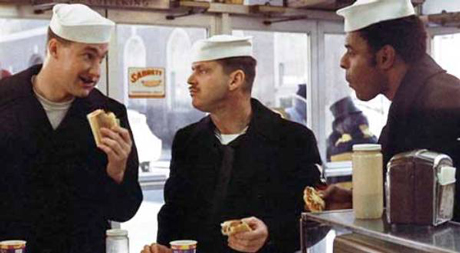 The trio takes buses and trains and is soon stopping off to eat, to drink and even to try to visit Meadows’ mother. Their adventures are not exaggerated. Excited about the prospect of finding girls in New York, they end up asking a sympathetic cabbie to take them to a Navy-friendly whorehouse. They spend much of the trip in freezing cold, looking for a warm place to have a cup of coffee.

The pathetic Meadows’ self-esteem is in the basement. If anybody in the Navy cared the slightest, they’d give him a good psychologist to work on the kleptomania that got him in hot water. Showing him a good time may not be a good idea: if you work in a slaughterhouse, it’s better not to form personal relationships with the cows.

Otis Young had a fairly busy career and this is easily his best picture. Young’s Mulhall is the most responsible of the three, yet he’s still up for his partner’s wild ideas, and the nightly heavy drinking in hotel rooms. 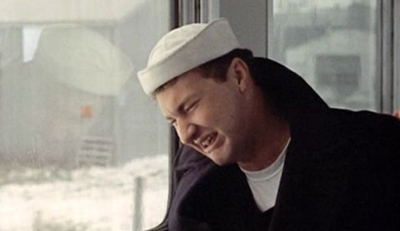 Randy Quaid is still playing a dimwit after his debut in The Last Picture Show. This was his most sustained performance to date, and he’s excellent. Meadows projects the lost-puppy dejection of a misfit who always knew he’d fail. He’s so passive that Buddusky practically beats him up to make him ask a waitress to fix his food order. The experience of hanging out with the wild Buddusky gives Meadows ideas. So does their visit to the Nichiren Shoshu meeting, where he grabs on to the notion that if he chants, a miracle might occur.

The Last Detail is a must-see for fans of Jack Nicholson. He’s still lean and sassy and he may have built up his arms to better play a body-proud Navy signalman. Buddusky keeps his big mouth and arrogant attitude in check when taking orders from the officers he clearly hates. Navy men have been misrepresented in the movies ever since the days of Frank Wead and John Ford epics. The peacetime (?) sailor Buddusky behaves as if his real job is to get away with everything he can, not get caught, and laugh about it later. Seeing some Marines in a bus station, Buddusky is compelled to follow them to the men’s room and start a fight; to his delight he finds that Meadows can throw a punch too. Nicholson is a major kick in this show. It’s only 1973. It’ll still be years before he runs out of new challenges, puts on a paunch and starts up with the self-parody performances. 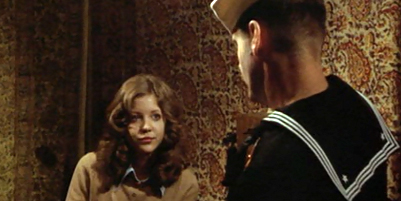 Viewers that haven’t seen The Last Detail since it was new will be surprised to find some special faces among Ashby’s supporting cast. Corman/A.I.P fans will enjoy seeing Luana Anders (Night Tide, The Pit and the Pendulum, Dementia 13) as a chanter who takes a shine to Meadows and invites the three of them to a party. Nancy Allen is a friend that Buddusky chats up, not realizing that she’s rolling her eyes at his vulgar attempts to impress her. One of the happy chanters is none other than Gilda Radner, a couple of years before Saturday Night Live. The incandescent Carol Kane (Hester Street) is the prostitute that Meadows chooses in the brothel, only to find out that her fee is the same “if it takes ten seconds or ten minutes.”

Finally, Michael Moriarty makes a killer impression as a hard-ass officer at the Portsmouth prison who gives Buddusky and Mulhall a hard time. He’s mean and unrelenting but Buddusky knows how to face him down without risking a stint in the brig. The Last Detail is highly recommended to all but folk severely offended by obscene language. 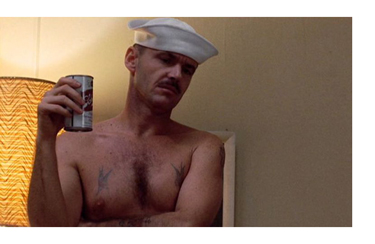 The Twilight Time Blu-ray of The Last Detail is a revelation. The print I saw back in 1975 or so was just wretched. The color was represented by four shades of green. It had no contrast and the grain so big that if you sat too close to the screen it might put your eye out. One reason that I preferred old movies back then is that most of the contemporary shows looked terrible. First engagement or studio screening prints looked okay but subsequent runs for some pictures were ground out as cheaply as possible. For shows affecting a gritty look, it apparently didn’t matter what they looked like.

Sony’s new HD transfer is glorious. The color is rich even with the drab and snowbound locations, filmed naturalistically. The image is clean and sharp, and the granularity is under control. The soundtrack is excellent. As music wasn’t particularly necessary for this story, Johnny Mandel provides transitional cues that sound adapted from military music, played by a service band. It’s a good fit. Twilight Time presents the music on an Isolated Score Track. An original trailer is the only other extra, besides Julie Kirgo’s insightful liner notes. She nails the tone of the times and lavishes deserved praise on the film’s terrific dialogue… every scene plays as if it were taken from life.