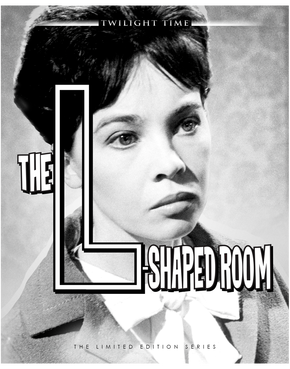 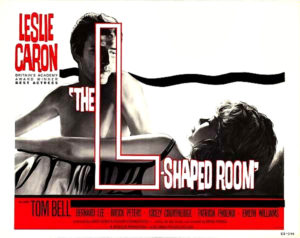 The winter of 1962 found British films at their most grandiose and self-effacing. Opening at the Odeon was Lawrence of Arabia, using every inch of that cavernous theater’s wide screen. Five minutes up the road Dr. No had just premiered in the smaller but no less lofty London Pavilion.

On the other side of the tracks art houses were bringing starry-eyed Brits back to earth with austere fare like John Schlesinger’s A Kind of Loving and Tony Richardson’s The Loneliness of the Long Distance Runner.

Those sober-minded dramas, shot in low key black and white with ramshackle flats and grey skies as their backdrops, are enduring archetypes of the so-called “Kitchen Sink” cinema, movies that rejected hollow Hollywood glamour to seek poetry in the poverty of working class stiffs. 1966’s Georgy Girl even made a plot point out of its leading ladies’ Plain Jane appearance.

Though it was a prime example of the genre, Bryan Forbes’s The L-Shaped Room was nevertheless an outsider among outsiders, adding unlikely tinsel-town allure to its skid row setting in the form of the luminous Leslie Caron.

Caron plays Jane Fosset, a beautiful French expatriate first seen wandering London in search of a room… any room. Rents being what they are, she finds herself in Notting Hill – the lap of luxury since the early 80’s but in 1962 a destitute area littered with streetwalkers and suspicious policemen. But it is a neighborhood nonetheless, complete with busy shops and noisy children slumming around bursting fire hydrants, not so different from the tenement lifestyles of Warner Bros.’ Dead End Kids.

Jane eventually finds a cramped and crooked space atop a flophouse inhabited by neighborly misfits; a caustic landlady, a thin-skinned jazz musician, a faded music hall star and a genial hooker who occupies the basement apartment. And in somewhat predictable fashion Jane enters into an uneasy romance with Toby (Tom Bell), the struggling writer across the hall (they bond over bed bugs) all the while disguising the reason she’s there in the first place; she’s pregnant, unmarried and weighing the consequences of an abortion.

Those were controversial topics for the time but par for the course in this kind of British-style cinéma vérité; Saturday Night and Sunday Morning, A Taste of Honey, and that same year’s A Kind of Loving all wrestled with such thorny subjects. To its credit The L-Shaped Room doesn’t so much wrestle with those issues as absorb them into its characters’ bloodstreams. “This is part and parcel of the human experience…”, the movie seems to say, “so grow up.”

Caron is certainly grown up, always an underrated actress whose waifish charm sometimes distracted from her more profound talent, she is quite affecting as the young exile responsible for her own banishment. The then 32 year old actress is completely convincing in her transition from down and out barmaid to enlightened woman of the world.

She has excellent support from Avis Bunnage as Doris, the contentious landlady and Cicely Courtneidge as Mavis, the has-been vaudevillian (her rousing rendition of “Take Me Back To Dear Old Blighty” opens the Smiths’ 1986 album The Queen is Dead). Bernard Lee, (appearing across town in Dr. No as “M”, Bond’s first in command) has a surprisingly rambunctious cameo as a piano-playing party animal. 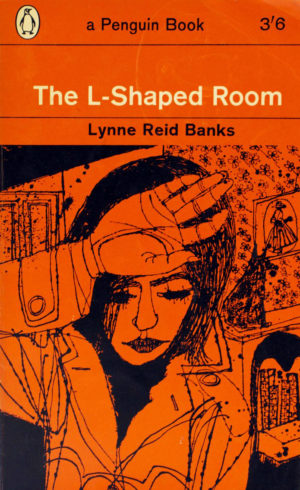 Forbes, always a thoughtful presence on the British film scene (his first effort was the moving Hayley Mills-Alan Bates vehicle, Whistle Down the Wind), not only directs in assured and unassuming fashion but wrote the fine screenplay which was based on the 1961 book by Lynne Reid Banks (best known for her children’s novels including The Indian in the Cupboard.) Though the colorful supporting cast is introduced in overtly theatrical fashion, Forbes’s prosaic yet lyrical dialogue gradually insinuates us into their company and leads us to a properly ambiguous and bittersweet finale.

The movie was photographed by the masterful Douglas Slocombe with a deceptively informal black and white palette that accentuates the desolate cold water flats yet manages to pay tribute to Caron’s beauty in Hollywood-friendly close-ups. Slocombe’s imagery is enhanced throughout by Brahms’s fatalistic Piano Concerto No. 1 in D minor, an apt mirror of Caron’s mood, while John Barry’s music takes the lead in a smokey jazz club sequence.

Twilight Time‘s blu ray highlights that soundtrack in an isolated music & effects track. The disc also features an audio commentary with screenwriter Lem Dobbs, Twilight Time’s “resident” film historian Julie Kirgo and British soundtrack specialist Nick Redman. The transfer of Slocombe’s work is immaculate; this humble little slice of life film has been given a presentation worthy of Lawrence of Arabia and Dr. No.