Kirk Douglas grits his teeth and goes full macho, wrasslin’ with that beautiful Sioux up in the high country — the Sioux miss in question being the Italian model Elsa Martinelli in her screen debut. Kirk can’t decide if he wants to stay with Elsa, or lead what must be the most shameful bunch of pioneer bigots ever to cross the plains. Walter Matthau and Diana Douglas are standouts in this vigorous action western directed by André de Toth. 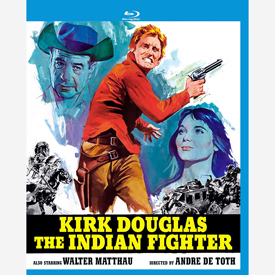 1955 was the year a lot of independent stars launched their own production companies, and Kirk Douglas inaugurated his Bryna Productions with this mainstream wagon train Western. It’s the usual set of misunderstandings and hostilities between red and white men, with renegade whites taking the blame for instigating bloodshed in what should be a happy coexistence. Oh, and European import Elsa Martinelli is on hand to sex up the picture. Although Douglas would take big risks later on, in terms of Hollywood politics, The Indian Fighter is ‘safe’ mainstream entertainment. These days the show might be notable for its director André de Toth, whose brand has risen lately with glorious restorations of Pitfall, House of Wax, Crime Wave and Ramrod. 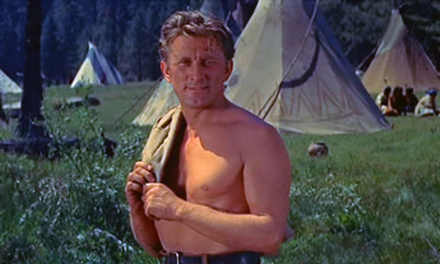 Prepare for a particularly disharmonious wagon train movie. Leader Johnny Hawks (Kirk Douglas), a loner known as an ‘Indian Fighter,’ enjoys a mutually trusting relationship with the Sioux tribe of Red Cloud (Eduard Franz). He’s also all fired up for the stunningly beautiful Indian maid Onahti (Elsa Martinelli), after spying her bathing in a mountain stream. Red Cloud is preparing for war to defend his people against the crimes of renegades Wes Todd (Walter Matthau) and Chivington (Lon Chaney), two louts that kill Indians to get access to the tribe’s hidden gold resources. Hawks plays hooky from his responsibilities to visit Onahti, which allows the gold hunters to start more trouble. The Wagon train flees back to the fort to fend off a major Indian attack, that is wrongly blamed on the absence of our amorous scout Johnny.

About as close as The Indian Fighter comes to reality is the idea that some Indian tribes objected to whites searching for gold on their lands. This apparently was a serious problem in the Dakota Territory, where rumors of gold strikes were purposely planted to induce whites to enter forbidden Indian lands. The violence that resulted served as a pretext for the Army to move in and wipe out the Indians, thus allowing land speculators to steal their real estate. This ploy, in various disguises, was repeated again and again in the winning of the West.

The Indian Fighter keeps the politics at a basic level. A nice scene sees Johnny Hawks befriend Briggs (Elisha Cook Jr.) an Ansel Adams-like photographer eager to document the vast Western scenery and its Indians. Hawks is angry that Cook’s photos will bring more thousands of settlers that will clog the territories with mini-malls, yet the scout is himself facilitating the exodus. The message can only be that the ruining of the wilderness is a foregone conclusion. In this respect the movie is like so many westerns that feign outrage over the extermination of Native Americans, yet do little more than sigh ‘Oh well’ en route to an all-white happy ending. 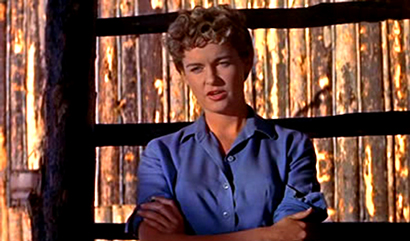 Most of the movie shows Kirk interacting with the cornball members of the wagon train. Little Tommy Rogers (Michael Winkelman) is a loudmouthed ’50s Dennis the Menace type who goes around fantasizing killing redskins. His mother Susan (Diana Douglas, Kirk’s ex wife – !) tries to snag Johnny as a husband, but must settle for dull tree grower Will Crabtree (Alan Hale Jr., ten years from Gilligan’s Island). Hale looks pretty trim at this age, and gives a heartfelt performance, but the story makes it clear that Susan’s heart will always be with the rough-tough Johnny Hawks.

The Army officers are suspicious types that distrust Kirk’s assurances that the Indians only want peace. Walter Abel is strong as the base commander, who reluctantly becomes an Indian-hater like the rest of the whites. Actor William Phipps has small roles in countless ’50s films, including a lot of science fiction classics, possibly because he doesn’t upstage anybody. Here he gets the thankless role of Lt. Blake, an officer who hates Johnny Hawks from the start.

It’s rather frustrating when both the authorities and Douglas allow the obvious villains to run free and cause havoc, especially after Douglas has established their crimes early on. Baddie Lon Chaney unfortunately contributes little but a mean attitude and some bluster. But it’s fun to see Walter Matthau’s intelligent villain, a conniving gold hunter is as interesting as his Snidely Whiplash character in Burt Lancaster’s The Kentuckian. A year later, Walter would be just as convincing as a low-key health nut gym teacher in Nicholas Ray’s Bigger than Life. Matthau was already a big name on Broadway, but continued for years as a character actor before getting his deserved attention as a screen star. His shyster lawyer in The Fortune Cookie is way over the top, but he’s perfect as a deadpan sheriff unhappy in his work, opposite Douglas again in Lonely Are the Brave. 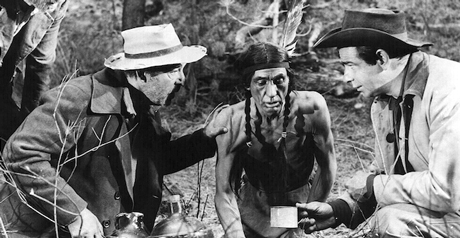 Director André de Toth appears to be working within tight limits circumscribed by actor-producer Douglas — the direction is competent but also fairly anonymous. This movie and King Vidor’s Man without a Star were Kirk’s first westerns since Howard Hawks’ The Big Sky. In the interim he’s built himself up as an action star, with a bigger teeth-gritting smile (count ’em – 107 teeth!) and a tendency to go shirtless and show off his broad shoulders. Although it’s a kid-safe show, Kirk’s Johnny all but rapes Ohnati in what has to be a chilling mountain stream. He tackles her and rolls her around on the rocks, as if he learned his bedroom moves from a salmon.

The central-casting Indians are an okay lot, liberalized by the script into seeming more civilized than the whites. Kirk fights a duel-like contest with the main brave for an okay action centerpiece. The big battle at the end is exciting but rather generic. It reminds me of the plastic Fort Apache play set I got for Christmas around that time. I think everybody my age had one, along with our Davy Crockett coonskin caps.

The Indians are even more liberal when it comes to woo-bait Onahti, whose name sounds like ‘oh, naughty,’ and who speaks with a definite Italian accent, for obvious casting reasons. She’s a less interesting but sexier version of the Indian maid ‘Teal Eye’ from Kirk’s earlier The Big Sky. Is Kirk compensating for his not winning the heart of ‘Teal Eye’ in the earlier picture? Not all of the Sioux are friendly to Johnny, but the tribe seemingly has no problem with Hawks and Onahti stepping out together behind the nearest tree. All that rough backwoods lovemaking is what Ohnati wanted all along, thereby making The Indian Fighter a very un-P.C. show by today’s standards.

Perhaps looking for angles to distinguish his debut production in the flood of western features, Douglas nudged the nudity barrier in a voyeuristic bathing scene. He and director Andre de Toth get away with what is technically a brief topless shot of Elsa Martinelli in shallow water. Audiences unaware of ’50s film conventions may not even notice it, and maybe guys in 1955 were too busy glomming Playboy to pay attention. Ms. Martinelli would win some hot European roles (Blood and Roses, for one) and would later find immortality walking with baby elephants in Hatari!, but never became a big star. As for Douglas, he pretty much got away with the same gag in his 1960 super-production Spartacus, this time with Jean Simmons in a classic, ‘are we seeing what I think we’re seeing?’ bathing scene. 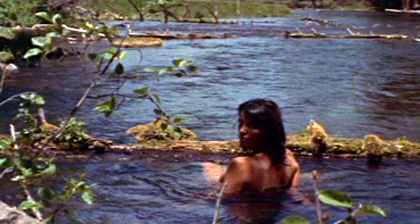 The Indian Fighter is an atypical wagon train story, in that the settlers shape up as a bunch of trigger-happy racists. They try to lynch Douglas the moment they suspect that he’s defected to the Indian side of the conflict. Why Douglas doesn’t do just that is a big mystery. Perennial villain Ray Teal accuses Johnny Hawks of being a dirty Indian-lover, when we happen to know that he’s the lover of an exceptionally clean Indian. Who probably makes great pasta.

Also returning from The Big Sky is familiar actor Hank Worden. He again plays an addled Indian, this time an alcoholic named Crazy Bear, who gives up the secret of the Sioux gold to the dastards Todd and Chivington. Worden also doubles as a Cavalry guardhouse jailer. Richard Farnsworth and Z-movie director Ted V. Mikels are said to be among the stuntmen, and famed stunt supervisor Buzz Henry (Our Man Flint) plays another young officer, Schaefer. Familiar face Frank Cady is a settler who runs a general store out of his wagon, which bears his name in big letters, ‘TRADER JOE.’ Considering what happens to Trader Joe, I don’t think the popular grocery chain (here in California) would consider The Indian Fighter as company history.

The slightly optimistic ending has the Wagon train exit, minus the help of the intrepid Johnny Hawks, who we last see again playing footsie with his Italian-model Indian maid in another mountain stream. Are we to assume that the decimated remnants of her tribe are sitting defeated over the next hill? This happy finale has the great frontiersman settling for sex, while the nation-builders move on. Except for the boost for Kirk’s love life (why else become a producer?), the ending doesn’t have a whole lot of resonance. A great joke would have been to arrange for the wagon train to pick up a replacement leader, George Donner.

The KL Studio Classics Blu-ray of The Indian Fighter presents a fine scan of this early CinemaScope production — the first thing up is the word ‘CinemaScope,’ written in bright red lettering with a rustic design. It looks as if slightly faded film elements were brought back almost to perfection through the wizardry of today’s scanning capability. The grain isn’t bad at all, and colors are bright and true- looking. We do see a drop in quality for some dissolves — dissolves on original Technicolor prints were done in printing (publishing, actually) without resorting to photochemical opticals.

An original trailer is included, along with notices for several other westerns. An aid to newbies to ’50s westerns is a pleasant commentary with film expert Toby Roan, a fountain of information on the movie from all angles. His observations and opinions focus on the film, as opposed to directing attention to himself. I intended to just check out the commentary and ended up listening to the whole thing. Mr. Roan checked in last month with an excellent commentary on the surprisingly good Roy Rogers western Sunset in the West.