New Yorkers of two centuries ago surely complained loudly about rampant street crime, but in the 1960s the media really ramped up the reportage paranoia. Had a new age of senseless violence begun? A New York play about terror on the subway is the source for this nail-biter with a powerful cast, featuring an ensemble of sharp new faces and undervalued veterans. 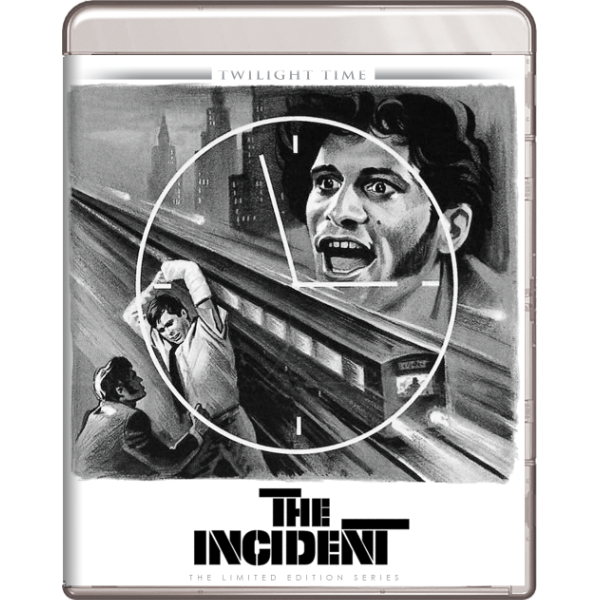 Various pundits (and people trying to sell guns) never understood how movies work. Only rarely do they drive cultural developments, and instead slavishly follow them. As a teenager I only became aware of rampant violence and civil indifference around 1966 or so, when the news of those slain student nurses hit the radio waves. No, I didn’t think much about the civil rights mayhem that had been ongoing for decades, and I didn’t become aware of the Kitty Genovese scandal until the second wave of outrage hit. Myself and millions of my fellow boomers thought of crime and punishment the way it happened on TV — the crooks were their own worst enemies, and goodness prevailed every time. Suddenly it became clear that cops were not always the good guys. Plenty of crimes couldn’t be easily rationalized — when greed and politics were ruled out, people sometimes did awful things just out of pure malice. The only explanation was a general disaffection from society, or perhaps pure existential rage — our war in Vietnam dropped a moral haze over the country as well. When movies finally touched on this ugly truth of American life — in both urban and rural locales — they could be truly terrifying. I found Walter Grauman’s Lady in a Cage, a mild but affecting study in sadism, to be plenty unpleasant.

1967 was the year for a general tell-it-like-it-is burst of violence on screens, with The Dirty Dozen, In Cold Blood, The St. Valentine’s Day Massacre, Point Blank and Bonnie and Clyde letting loose the demons in genre-oriented form. But the relatively small Fox picture The Incident brought the violence down to everyday reality, at least for New Yorkers. Adapted by Nicholas E. Baehr from his own off-Broadway play, director Larry Peerce used gritty B&W cinematography and a semi-documentary look to define the urban horror image of the New York subway system.

Nine years later Joseph Sargent would make the mean streets of NYC seem funny in his superb The Taking of Pelham One Two Three. Peerce and Baehr give us a hundred-minute ordeal of the kind we all fear: intimidation by irresponsible thugs. The pins its theme on the Kitty Genovese incident (now put in historical doubt), the idea that Americans had become so callous and selfish that they’d watch an innocent person fall victim to a crime, and do nothing. [ Well, DUH … given the right circumstances, that happens everywhere in every city on Earth. Only movie and TV dramas gave the impression that people consistently act on principles of decency and fair play.] The Incident was not easy to watch in 1967 and is still pretty potent stuff. In ‘How would I react?’ terms, many of us face the same potential problem every day. From intimidation in public to road rage on the freeway, the first thought now is, ‘What if the guy has a gun?’ Even when new, the picture was recognized as an actors’ dream: extreme characters in an extreme situation, with constant opportunities to showboat. There’s nothing wrong with that — everybody’s great in the picture and it’s a fine debut for Tony Musante and to a lesser extent Martin Sheen. Critics Bosley Crowther and Roger Ebert both thought the characters were clichés and the storyline fudged to play up the Kitty Genovese angle. A few details aside, the fact that the story is a dramatic confection is not a serious problem. The lineup of talent, including plenty of faces familiar from more genteel film fare, is impressive in itself.

Sixteen late-night commuters are held hostage and terrorized on a Grand Central-bound subway car. Petty criminals Joe and Arte (Tony Musante & Martin Sheen) are on a troublemaking joyride, scaring people on the street, and mugging and beating a man. The 2 a.m. riders are an unhappy group. Bill and Helen Wilks (Ed McMahon & Diana Van der Vlis) are a bickering couple with a sleeping daughter. Retired Sam and Bertha (Jack Gilford & Thelma Ritter) are arguing about their son. Partygoers Harry and Muriel (Mike Kellin and Jan Sterling) are at odds because she’s fed up with his lack of ambition. Douglas (Gary Merrill) is an alcoholic trying to land a job. Ken (Robert Fields) just unsuccessfully tried to pick up Douglas in a bar. Felix and Phillip (Beau Bridges & Robert Bannard) are Army privates; the easygoing Felix has a broken arm, immobilized in a cast. Young Alice (Donna Mills) has been resisting the advances of Tony (Victor Arnold), but once on the train they start making out. Last on the train are Arnold and Joan (Brock Peters & Ruby Dee). Arnold has a permanent hate going for whites, and Joan is having difficulty getting him to cool off. Also present is a homeless man (Henry Proach), sprawled out asleep.

The first half of the story brings the passengers together, and the second half sees them harassed, intimidated, humiliated and roughed up by Joe and Arte, one couple at a time. It’s a drawn-out ordeal. The self-entertained thugs laugh themselves silly for almost forty minutes straight; they’re drunk with booze and an inflated sense of their own superiority. Naturally, all attempts to reason with them fail, and nobody comes to the aid of individuals being tormented. Douglas objects and is cowed into submission. The necking couple stay silent and passive; Joe moves on because he’s bored. Bill and Helen are carrying their sleeping daughter, so also do their best to be invisible. Most everybody else looks the other way in a microcosm of a common liberal narrative: too many people refuse to take a communal responsibility for each other.

Naturally, nothing works to subdue the punks, who find a different way of rattling each target for their fun and games. Arte immediately intuits that Ken is a homosexual and gives him the works. From an earlier exchange, Arte and Joe have ‘twisted’ sexual preferences of their own — they don’t directly threaten the women with rape. The identification of criminal thuggery with sex identity isn’t particularly welcome.

We quickly notice how schematic things are. The hoods terrorize people in turn, like acts in a vaudeville show. The various victims don’t interact much between themselves. As they’d likely be in a state of isolation and panic, this is not impossible to imagine. But while dishing out its checklist of recognizable types, the authors have skipped a few. We meet no nervy, sassy New Yorkers that act cocky or offer the intruders a defiant ‘F. You.’ As soon as the first passenger is slapped around, no more resistance is offered. If this be an acting showcase, we certainly get our fill. Joe Musante and Martin Sheen maintain the terror with admirable skill, never calming down for a moment. Musante’s Joe is a genuine threat, and Arte the perfect stooge. Most of the passengers shape strong mini-portraits of fear. Diana Van der Vlis (“X”: The Man With the X-Ray Eyes) is given little to do, but Ed McMahon surprises us with his convincing character. It’s his first acting role in a movie. The incredibly talented Jack Gilford and Thelma Ritter are an immediate hit, overdoing neither their ‘old ethnic couple’ act nor their physical response to Joe and Arte, who block their exit by shoving a shoe in the subway car’s door mechanism. When Ritter slaps Joe in anger, we really feel it.

The movie’s strongest scene of menace pits Musante’s Joe against Jan Sterling’s Muriel. Muriel is already angry at her husband, and risks getting stabbed or raped when she unleashes that anger on the dangerous hooligans. Ms. Sterling won some good roles, but in classic noirs she was often tasked to play her femme fatales as sullen and indifferent. Her rage here delivers a jolt that I haven’t felt in any of her other pictures. The most controversial confrontation is between Joe and Brock Peters’ Arnold, with Ruby Dee’s Joan valiantly trying to keep her husband from being killed. Setting believability aside, is the Arnold character satisfying? When we meet him, he’s already primed to burst out in violence of his own, a Peters specialty. Arnold sneers in approval at the sight of white guys being mussed up and humiliated. But when directly confronted, Arnold folds as well. Joe and Arte don’t even bait him as strongly as they might. Worse, when the opportunity comes up to join in a fight, Arnold still holds back.

We can’t help that feel that Arnold’s actions are being stifled by the author’s thesis. That Arnold is made to seem a hollow blowhard (unfortunately) plays into negative race stereotypes. A dramatic problem is that we want particularized people, not symbols, yet we still want movie characters to fulfill our expectations. The ‘Author’s Formula’ at work here is a bit too naked. If anything, the Arnold segment is disconcerting because of our knowledge of Brock Peters, who is no shrinking violet. Peters could likely wipe out Sheen and Musante by simply flaring his eyebrows. For a finish Baehr and Peerce opt for grim irony. The ending violence is just more misery, and not a satisfying retribution. No group solidarity emerges. When the cops first board the train, they immediately attack the wrong person, for a damnably wrong reason.

With a couple of minor exceptions this is Beau Bridges’ first adult feature role, and he carries it off in great style. His soldier from Oklahoma is afforded added dimensions denied his fellow travelers. Even with the fireworks provided by Musante and Sheen, Beau Bridges makes the strongest impression — we naturally side with anybody who stands up to the threat. The Twilight Time Blu-ray of The Incident is a terrific disc of this long-neglected picture; I remember turning away from a late-night broadcast long ago because of a murky image.

This disc has a great B&W look. By 1967 B&W theatrical features had been all but phased out of studio offerings. The slightly grainy monochrome image grabs us as color would not, saying, ‘this is real.’ Director Peerce is on record confirming the fact that Fox wanted the movie in color but opted to let Peerce have his way.

Nick Redman hosts a commentary track with Peerce, whose candid assessment of his show makes for good listening. We learn that it was an independent picture that ran out of money before Fox came along. Peerce tells us that his career was dead in the water after his acclaimed mixed-marriage movie One Potato, Two Potato. He stepped back to TV work for a couple of years, which he says gave him the experience to do a good job on The Incident.‘ I can imagine the show being omitted from TV syndication packages for fear that it would inspire hoodlums . . . it’s an all-harassment, all the time movie.

Julie Kirgo’s liner notes make the case for The Incident as an unjustly-forgotten gem, and I agree that it gives fans of acting a lot to admire. Everybody’s good. It’s the roughest you’ll see Thelma Ritter or Jan Sterling. Back then, a showcase like this could be a real career boost for the actors just getting started.