John Ford and Samuel Goldwyn’s South Seas disaster picture can boast spectacular action and compelling romance. The unjustly imprisoned Jon Hall crosses half an ocean to rejoin his beloved Dorothy Lamour under The Moon of Manakoora, before an incredible (and incredibly expensive) hurricane blows the island to smithereens. Ford’s direction is flawless, as are the screenplay by Dudley Nichols and the Hollywood-exotic music score by Alfred Newman. 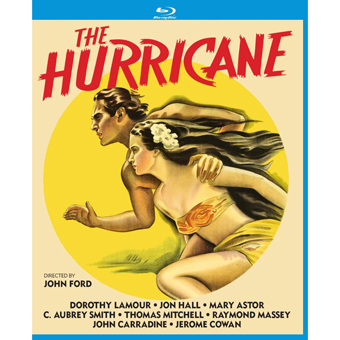 Everybody likes John Ford films, but some are almost never screened (Submarine Patrol, Four Men and a Prayer) and others have few friends (Mary of Scotland). Not discussed enough is his 1930s disaster film, the epic South Seas tale The Hurricane. Producer Samuel Goldwyn gave Ford a lot of money to spend, sending a film unit to distant Polynesia and mounting an enormous special effects effort. In 1937, $400,000 in physical effects went a long way. The massive hurricane scene was a deliberate attempt to top MGM’s San Francisco of a couple of years before. 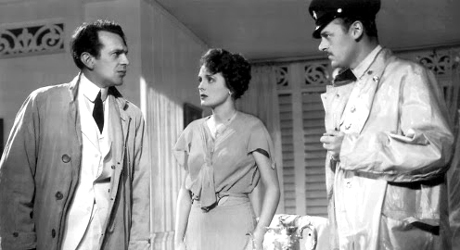 The Hurricane is indeed amped up with glossy Goldwyn production resources. But it’s still a very personal John Ford picture. The director seems to have been a conscious ‘auteur,’ as elements from the movie show up in scores of Ford pictures that followed. Hollywood’s earlier South Seas excursions had been half-documentaries with exotic trimmings, or glamorized morality tales about the then-controversial issue of racial intermarriage (Bird of Paradise). Ford and his forthright screenwriter Dudley Nichols go straight for the theme of colonial oppression, juxtaposing European rigidity against the presumed ‘natural’ Eden of the idyllic isle of Manakoora.

Island trader captain Nagle (Jerome Cowan) brings his sailing ship through the reef surrounding Manakoora, thanks to the piloting skill of his brightest sailor, Terangi (Jon Hall). The island’s favorite son, Terangi has one night to marry his beloved Marama (Dorothy Lamour) before shipping out for a quick trip to Tahiti. Also returning to Manakoora is Charmain (Mary Astor), the wife of the stern and unyielding French governor of the islands, DeLaage (Raymond Massey). Although his best friend Dr. Kersaint (Thomas Mitchell) chides him frequently, DeLaage holds the native Manakoorans to harsh French law. Neither Charmain nor Father Paul (C. Aubrey Smith) can persuade the proud governor to accept that the islanders are like innocent children that cannot be tamed. While in Tahiti, Terangi is arrested and sentenced to several months for striking a white man who insulted him. Tormented by a sadistic warden (John Carradine), Terangi repeatedly escapes and is recaptured, until his sentence has increased to several years. Time passes. Back on Manakoora, Marama now has a young daughter. When Terangi makes yet another break and heads for home, the natives withhold the news from DeLaage, who alienates Charmain and his associates by insisting that the dangerous criminal be recaptured. But nature intervenes in the form of a horrendous hurricane. 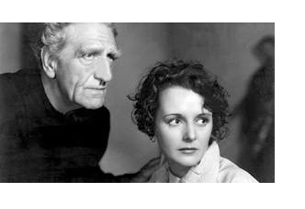 The Hurricane is what passed in the 1930s for a super-spectacle. The Hollywood gloss accounts for the grandiosity as much as the effort for realism — although plenty of the palm trees and beaches we see are real, much of the show was filmed on Catalina, or reproduced on Goldwyn’s sound stages. The impressive special effects involve miniatures but also full-sized sets blasted by massive wind machines and water dump tanks several stories tall. Publicity stories touting the effects didn’t need to exaggerate: hundreds of thousands of gallons cascaded over the sets, sometimes blasting main cast members lashed to trees, notably  Jon Hall and Mary Astor. The modern adventuress par excellence, Ms. Astor was up for the punishment and risk.

The perfectly cast movie gives us Raymond Massey as yet another idealist-martinet, refusing to intercede on Terangi’s behalf in the name of French justice. The South Seas is portrayed as a paradise where people still live by the laws of nature, with French rule an unwelcome intrusion. Terangi endures a Devil’s Island-like torment, which to some degree is a replay of Ford’s The Prisoner of Shark Island, complete with a rotten warder played by John Carradine. [ Poor Carradine — so often the villain. To compensate, I recommend the Tyrone Power movie Son of Fury, where he plays a tough sailor who finds peace and contentment in Tahiti, far from the evil of white men. ] 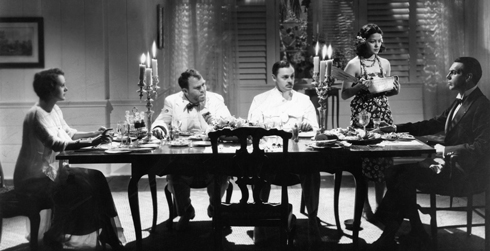 Manakoora is a potential paradise, like Shangri-La but without the phony philosophy. Father Paul’s Christianity takes primacy over the pagan rituals, with Marama and Terangi first taking part in a formal Catholic wedding service before dashing off to a wild communal bash. Sailing enthusiast and Navy man John Ford stresses the feeling of a slight fantastic delirium, just being in contact with this paradise.

Back at UCLA in the early ’70s, graduate students Nick Peterson and Janey Place screened a large number of John Ford films in quick succession, the main effect being that Ford’s career did indeed seem to constitute one big interrelated movie, with different characters and plotlines in individual chapters. The Hurricane has strong connections with several other Ford pictures.

Ford reprised the ‘Manakoora effect’ in his later Mister Roberts. When Henry Fonda’s cargo tub approaches a Polynesian port, the music swells, as if they had arrived at the pearly gates. Ford clearly loved the fantasy visuals of natives rushing to the beach to sing songs of greeting, with nubile young women eager to throw leis around the necks of the sailors. Unfortunately, the real-life truth of this dream is that exotic ports had long been repurposed as brothels for white masters from afar. 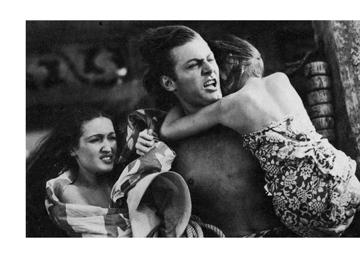 Ford makes a nearly abstract return to the Manakoora mindset in his late career John Wayne film Donovan’s Reef, an outright comedy. It uses the same South Seas Paradise iconography, going so far as to stage arrivals and departures on a beach as choreographed pageants. The ritualized splendor of Dononvan’s Reef encourages the idea that the whole movie is an afterlife fantasy, where even the enemies Liberty Valance and Tom Doniphon can retire in peace. Dorothy Lamour returns in Reef as a vulgarized Marama, the French Polynesian good-time girl Miss LaFleur. In her dance hall song, LaFleur lists a number of items her boyfriend is going to bring her, gifts that align with the gifts Terangi promises to bring Marama on his fateful voyage.

A much easier connection to spot is Thomas Mitchell, whose drunken, philosophical doctor is a warm-up for his Oscar-winning drunken sawbones two years later in Stagecoach.  Although Doctor Kersaint does not directly witness most of the events in the film, it’s all presented as his personal memory. In the present-tense opening, Kersaint is on the deck of a boat that cruises by what’s left of Manakoora after the deluge. Inez Courtney surveys the wreckage, and Kersaint either tells the tale or simply thinks about it. The bulk of The Hurricane then plays as a flashback. Oddly enough, there is no ‘release’ from the flashback at the film’s fade-out. We don’t return to Mitchell and Courtney on the boat, years later. I guess the world has been pre-empted by Dr. Kersaint’s subjective experience, and we’re stuck in his brain forever. 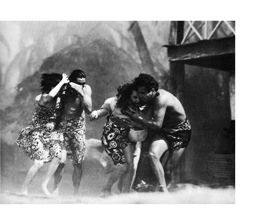 Jon Hall was typecast as a jungle Adonis extraordinare after The Hurricane; I’m surprised that nobody tapped him to play Tarzan.  Hall does not at all resemble a Polynesian, but that’s show biz. John Ford and his stunt arrangers manage some marvelously athletic feats for Terangi’s prison escapes, and his struggles during the hurricane. Terangi must tie his entire family and the sympathetic Charmain to a tree, and it all looks more than a little dangerous. Those wind machines are so fierce that a loose nail could be as bad as a scrap of shrapnel. And there’s so much water, it looks like somebody could choke and drown while standing up.

The miniatures now look exactly like what they are, so some viewer cooperation is helpful in accepting that an entire island has been wiped out. The storm reduces Manakoora to a featureless atoll, little more than a sandbar and a bare tree suitable for castaway cartoons. You know, no real island atoll. Right through to its highly sentimental finish, The Hurricane remains a satisfying Hollywood disaster epic. 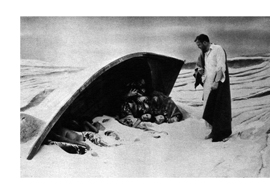 The KL Studio Classics Blu-ray of The Hurricane is a great rescue of this exciting John Ford classic. Although Sam Goldwyn took good care of his library, we were previously accustomed to seeing this particular title only in so-so 16mm prints, and bootleg DVDs off a similar source. Right from the titles we can see that this restored copy is great, with good contrast, sharpness and detail. There is some grain here and there but overall the image quality is spectacular. HD helps with the many wide shots, which on old 19″ TVs had us straining to identify speakers in some scenes. The added clarity makes the elaborate special effects look more impressive, not less.

The audio commentary by long-time Ford expert and biographer Joseph McBride adds greatly to our enjoyment — a transcript could serve as an entertaining making-of book. McBride’s authoritative opinions are as welcome as his well-researched facts. He knows of many more ‘Ford’ connections than the ones I’ve recalled. He tags Thomas Mitchell’s Dr. Kersaint as a Ford surrogate, and says that Terangi serves as a Christ figure, saved by the hurricane that blows the papers from DeLaage’s desk, and then blows away the desk, the house and all trace of France itself. A trailer is included as well. This disc is a good deal for movie lovers longing to return to ‘the Moon of Manakoora.’