Hammer hits one out of the park with this ‘ripping good’ Sherlock Holmes tale, tilted heavily toward gothic mystery and horror. Peter Cushing and André Morell excel in heroic roles, while Christopher Lee doesn’t have to play a monster, just a coward. Terence Fisher’s directing skill is at its height. 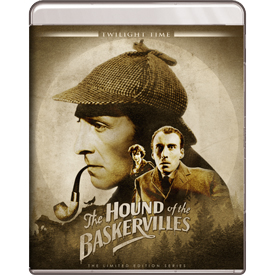 In addition to their straight-up gothic horrors, Hammer films produced films in other genres, such as costume adventures and war pictures. A big hit for the company was The Hound of the Baskervilles, a picture so well made that it’s often ranked with the company’s best work. It’s also been called the best Sherlock Holmes movie ever. Hammer should have pursued more Holmes adventures, but we’re told that this trial balloon feature didn’t bring back the money they had hoped for. The boys at Bray get great mileage out of Arthur Conan Doyle’s horror-inflected mystery set on the moors of rural England. With sensitive direction and a sumptuous look that defies its modest budget, this is indeed surely the best version of The Hound of the Baskervilles on film. The fastidious Peter Cushing is a dashing, keen-witted Sherlock, and Christopher Lee makes one of his few appearances as a leading man. Just as the young audience for Lord of the Rings was enticed to check out Ian McKellen’s Mr. Holmes, I’ve found that the same young folk are willing to try out Peter Cushing’s super-sleuth because of Star Wars. They like him just much as they do the current TV fellow Cumberbatch.

This version of Doyle’s most famous Holmes thriller puts our hero on the trail of a diabolical curse. Doctor Richard Mortimer (Francis De Wolff) responds to threats on the life of Sir Henry Baskerville (Christopher Lee) by hiring consulting detective Sherlock Holmes (Peter Cushing) to solve the mystery behind several male Baskervilles that have died on the moors. Holmes’ associate and best friend Doctor Watson (André Morell) journeys alone to the Dartmoor Baskerville estate to lay out the groundwork. He finds an ancient mansion with a missing portrait and bitter neighbors that begrudge the Baskervilles their good fortune. To add to the tension, an escaped convict is said to be on the loose. The ‘Curse of the Baskervilles’ involves a demon-hound from Hell, a myth that Watson is compelled to take seriously when he hears its howl across the treacherous, boggy landscape. Arthur Conan Doyle’s most famous story is structured around a family curse stemming from an ancestor’s torture and murder of an innocent woman (Judy Moyens). In other words, it’s just the kind of gothic situation that classic horror films dote on. In a crisply paced prologue set a century or two back, Sir Hugo Baskerville (David Oxley of Ill Met By Moonlight) raffles off a captive girl for rape by his dissolute friends. When she escapes, he sends the hounds after ‘the Bitch!’ which leads to a bloody end. Not even Gainsborough’s pulpy costume pictures were this gruesome. I believe that in the American version, the word ‘bitch’ is blooped by another noise, perhaps a dog’s bark. It’s pretty strong for 1959, England or America. Sherlock Holmes doesn’t get involved until a few generations later, when the present Baskerville heir Sir Henry (Christopher Lee, in fine form) returns from South Africa after the mysterious death of his father.  A supernatural hound is said to be doling out retribution for the family’s earlier crimes, but Sherlock’s having none of that: the more diabolical the clues, the more convinced he is that some logically-traceable rational motivation will lead him to the culprit. Out on the moors, amidst sucking quicksand and crumbling mineshafts, the pursuit of the truth is Sherlock’s only concern.

Basil Rathbone is a pale poseur next to Peter Cushing’s cool, calculating crime solver. Slightly smug, thoroughly confident, this Holmes operates as an independent intellectual, frequently excluding the faithful Doctor Watson from his plans. He’s also not above using callous snobbery to further his investigation. He insults Sir Henry’s neighbors so as to manipulate the emotional nobleman. As a character, Holmes is a man with a complete understanding of how Victorian England operates. Some of the stories seem a criticism of the era’s rigid, classed social system. He places himself as an outsider, respected yet friendless, save for Watson. Peter Cushing combines this socially aloof stance with a flair for feverish action. Always in motion, Sherlock is forever dashing across some lonely ruin. Since the locations are the same cramped sets used in Horror of Dracula, Cushing’s exertions are limited to lurching and vaulting a couple of yards at a time. But with his stage-honed sense of physical drama, the performance is thrilling to watch. And he has a tense, precise flair for great dialogue. Stabbing an ancient dagger into a tabletop just an inch from Doctor Mortimer’s hand, he shouts, “Perhaps THIS will refresh your memory!!”

André Morell’s interpretation makes Dr. Watson for once a serious foil instead of comedy relief. A bit stodgy and unimaginative, Watson is really the hero of the story — he soldiers through the story’s incident-laden center section in good faith, Holding forth in Holmes’ absence.

Savant understands that Peter Bryan’s script deviates widely from the original book, and can’t help but wonder if Doyle gave the class-warfare angle the same emphasis seen here. A number of Hammer films around this time had overt political themes. Colonial issues inform The Mummy, and The Stranglers of Bombay re-interprets a real historical murder-for-profit cult as anti-colonial terrorism. (spoiler, sort of) As it turns out, the Baskerville Curse is a myth exploited by an immigrant clan to redress the past injustices of neighbor clan. Sex is a key angle: As in Stranglers a vengeful vixen is at the center of the terror. Cecile (Marla Landi) kisses a duped Sir Henry as deceptively as does the vampire bride in Horror of Dracula, reveling in the way her allure crosses a class barrier to bring down her victim. After a ferocious spate of premature gloating, her plan fails to level the Karma of the Baskervilles. But the curse is perpetuated anyway — the unloved Sir Henry may never sire an heir. Too bad — if Cecile wanted to achieve her family’s revenge, all she had to do was marry Sir Henry and then give him grief. As in other Hammer films, the class injustice is noted but little sympathy is offered. Terence Fisher’s Sherlock Holmes movie ends in a properly Victorian manner: the uppity have-nots are soundly hammered back into their proper place. The Twilight Time Blu-ray of The Hound of the Baskervilles gives us a worthy special edition. Viewers will definitely be impressed by the visual presentation. Hound was filmed by Jack Asher, a lighting director who believed in taking the time necessary to do things right. Another reason that the first three years of Hammer horror stood out were the rich saturated colors in original Technicolor prints. A close-up of Cushing will bring out every detail in his checkered woolen coat, while wide shots of rooms practically bathe us in lush décor. The only radical color effect are the saturated greens in the alcove where Watson and Holmes await the arrival of the demon hound. Chris Lee’s confrontation with a tarantula (so carefully copied for Dr. No) even gives the spider a handsome, multi-colored close-up. Nobody is going to forget the legacy of Christopher Lee — fans of the two biggest franchises of the last twenty years need to see more of his earlier career.

Hammer fans should like the extras, starting with an Isolated Music & Effects track that showcases the James Bernard music score. The old MGM DVD was very sibilant, especially in Marla Landi’s big speech; that problem has almost been eliminated. From the MGM disc, I believe, come a featurette and an audio extra of Christopher Lee reading from Sherlock Holmes. Two new commentaries give us input on the show. Track one has an informed discussion by David Del Valle and writer Steve Peros; and track two gives us Paul Scrabo hosting publisher Lee Pfeiffer and writer Hank Reineke. Pfeiffer offers context for the late ’50s when the show was made, while Reineke contributes a great deal of research, plus notes from Hammer expert Ted Newsom. Also new is an interview with Margaret Robinson, who made the ‘devil dog’ hound’s mask for the picture. A trailer wraps up the disc extras, while Julie Kirgo’s enthusiastic liner notes show that she’s a Hammer fan as well — or at least can work up a convincing appreciation.

When Eclipse put out their special Wicked Melodramas from Gainsborough Pictures disc set in 2012, I found it to be an indispensible link to the style of Terence Fisher’s Hammer films. Fisher edited for Gainsborough’s directors Leslie Arliss and Arthur Crabtree, and his dynamic blocking and compositions carry on the Gainsborough house style. The older studio had the pulpy, lustful stories, Hammer just added intense color and vibrant gore.