A story of murders in the ER becomes, courtesy of writer Paddy Chayefsky, either a preview of social breakdown or an impassioned examination of why we invest our lives and souls in imperfect institutions. George C. Scott is the doctor coming apart at the seams, who meets his match in a New Age hippie from a New Mexico commune. My instinct is that such a person would not look like Diana Rigg, but everybody needs a dream girl. 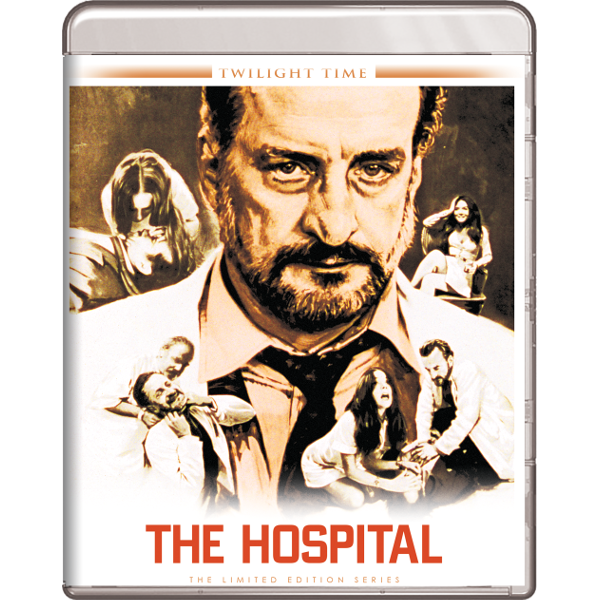 Paddy Chayefsky sits a pretty high roost among writers. He’s probably the most celebrated scribe to come out of New York’s Golden Age of Television. He’s generally considered the auteur of the features bearing his credit, even one or two that he disavowed.

Several of Chayefsky’s pictures present a man of authority that breaks down on the job, producing chaos but also becoming the spiritual conduit for strange, counter-intuitive ideas about life. The attendant speeches allow Chayefsky to air his radical opinions on a number of subjects. In The Americanization of Emily an Admiral’s stress breakdown puts in motion an insane, suicidal mission for an officer who prides himself on practical cowardice. In Network, a news anchor becomes a madman preaching social apocalypse. The (black) humor in these pictures is that the ‘crazy talk’ Chayefsky lets loose isn’t really all that crazy; most of the ideas we thought were absurd in Network have now become horribly true.

Preceding Network by several years is 1971’s The Hospital, in which Chayefsky rails on about our modern dystopia by thoroughly trashing one of America’s most cherished institutions. The screenplay won every major American writing award given to film. At first we think we’re looking at a M*A*S*H– like romp about a non-functional hospital and emergency room. Local activists are all but rioting, the ER is overflowing with the victims of crime, substance abuse, domestic brutality, and the staff can barely cope. An officious clerk Frances Sternhagen) badgers near-unconscious patients for their insurance numbers. A randy intern (Lenny Baker) biggest concern is locating a free bed where he can have sex with a technician. And a greedy surgeon (Richard A. Dysart) performs incompetent operations because he’s too busy incorporating himself to reap unearned profits. A sardonic narration (spoken by Chayefsky) explains why the house of healing has become a death trap of bad medicine, with wrong diagnoses compounded by more wrong diagnoses. As the camera weaves through the receiving room crowded with coughing and moaning patients, we see one poor soul who has been pushed into a corner and is …”promptly, simply, forgotten to death.”

The camera observes these grim proceedings with a docu-like style fairly innovative for 1971. It may have reminded some viewers of the previous year’s Hospital, the second documentary by the renowned Frederick Wiseman. The (fictitious) Manhattan Medical Center’s sterling reputation as a teaching facility is shared its sage head of instruction Doctor Herbert Bock (George C. Scott). But today Dr. Bock is a hung-over wreck. His wife has left him, he’s thrown his son out and he’s slipping into alcoholism. His suicidal rants prompt the the hospital director Sundstrom (Stephen Elliott) to offer help, and Bock voluntarily visits the chief psychologist. But Bock has so many disasters on his watch that he momentarily forgets about his personal problems. Interns, nurses and other staff are dying under mysterious circumstances — seemingly by the hospital’s impersonal bureaucratic snafus. By the time that the house lawyer Hitchcock (Jordan Charney) discovers that someone is switching patient ID’s, a terrible death has a occurred in an operating room mix-up, and a man in for a simple procedure has one kidney removed and the other almost destroyed. Bock takes an interest in the attractive Barbara Drummond (Diana Rigg) who wants to her unconscious father, himself a doctor (Barnard Hughes), discharged and taken back to the Indian reservation where he ‘dropped out’ several years earlier. By the time the secret of the deaths is discovered, Bock is seriously considering dropping out himself, and heading for the hills with Barbara.

On the surface, The Hospital’s bizzare murders rival those of a body-count horror picture like Blood and Black Lace. But Chayefsky makes the mayhem seem real by ladling on full measures of medical shop talk. We see Dr. Bock teaching his medical students and trying to diagnose the crazy, deadly ‘cures’ being dispensed in what is quickly becoming a madhouse. The proceedings stay funny out of pure, undiluted absurdity. The narration eventually stops, but its dry reportage sounds like something read at the funeral of Medicine, or the Death of Sanity. The way that ‘The System’ allows people to die left and right reminds us of horror stories about egregious medical errors. The intern sneaking around for sex may be a real joker, but we certainly don’t want him to die. Sudden death is so commonplace in emergency rooms, we realize, that somebody clever could do horrible damage before being caught. With budget cuts and systemic negligence, we all have heard about hospitals that are shut down for gross incompetence. Dr. Bock is so demoralized that he contemplates giving himself a suicidal injection, after screaming, “We cure NOTHING!’

Yet the insanity is presented in a farcical format. Another patient (Andrew Duncan) whimpers that nobody will believe his claim that he saw a half-naked Indian in his hospital room, and witnessed a supposedly comatose man rise from his hospital bed, don a Doctor’s smock, and go forth to kill with the words, “I am the fool for Christ, and the Paraclete of Caborca!” The patient tries to hide under his sheet, almost like the baggy pants comic in the Burlesque skit who howls, ‘Noyse! Noyse!’

Lesson for the day: Paraclete is in one definition a ‘human intercessor.’ Caborca sounds like a cabalistic touchstone word, but it’s just the name of a municipality in Sonora, Mexico. Some of Chayefsky’s stylized dialogue is a bit thick; we’ve had to strain to keep up with his flamboyant prose ever since James Garner’s double-talk speeches on the subjects of cowardice and bravery in The Americanization of Emily. Dr. Bock, Dr. Drummond and his daughter all rattle off convoluted verbal arguments as baroque as anything in Force of Evil and Sweet Smell of Success. But only once or twice do George C. Scott’s ravings seem forced. It’s one of the actor’s best film performances; Dr. Bock is a superior man trying to hold onto his sanity under extreme provocation.

In her first American picture Diana Rigg is refreshingly direct and unsentimental. Her Barbara Drummond describes her father’s abandonment of normal medicine to become something of a New Age guru in a New Mexico commune, immersed in Apache religion and rituals, etc.. Medicine is under assault by rank superstitious spiritualism . . . were Chayefsky writing today, he wouldn’t have to go so far to show scientific rationalism being undermined. (“As the world becomes more primitive,” wrote A.I. Bezzerides in Kiss Me Deadly . . .)

Many of the fine actors in this snappy ensemble are more recognizable now than they were in ’71. Nancy Marchand, the original Clara in Chayefsky’s Marty, is an administrator who weathers Dr. Bock’s abusive tirades. Roberts Blossom is an unlucky patient, Katherine Helmond a patient’s relative, and Robert Walden a younger doctor. I confess that I didn’t become fully aware of the great Richard Dysart until Carpenter’s The Thing; he’s fine here as the pompous surgeon-with-privileges. Notable face-spotters will gasp at the sight of Stockard Channing, reciting just one brief line in her first feature film appearance. We also get glimpses of Sab Shimono, Tracey Walter, Christopher Guest, Dennis Dugan and Julie Garfield (who wrote me a nice note last year!). I’m sure it has occurred to many viewers before me, but The Hospital and Network are so similar that they could have come from the same structural outline. The relationship is like that between Major Dundee and The Wild Bunch, where the ingredients for one show were re-mixed slightly differently to make the a second. Not only is a major institution (hospital, TV network) in functional meltdown, each show features a caring professional with a crumbling marriage. In both stories a wise professional goes rogue, spouting messianic mumbo-jumbo and preaching the apocalypse. There isn’t a one-to-one character correspondence, as Howard Beale’s tirades in Network are spread across three characters, not just Dr. Drummond. Barbara talks about being mad herself and walking naked in the street. Numerous sidebar parallels crop up as well. The communist manifesto-speak from the Angela Davis clone in Network is taken up by the abusive political activists besieging the hospital. And both shows share a grimly humorous narration, delivered in the exact same tone.

This is probably Arthur Hiller’s shining hour despite making several more successful pictures. I guess in my mind the director will always be followed by a dark cloud called Love Story. Hiller filmed the show at the real Metropolitan Hospital in Manhattan. Victor Kemper’s unadorned cinematography never becomes sloppy, and maintains a docu look even while making sure that actors are handsomely lit. The fatal operating room scene is creepy not because of any excess of gore, but because the medical specialists’ ‘cool, professional’ attitudes stay jokingly aloof even in the midst of a perfect storm of incompetence. The tragedy isn’t directly their fault, but we condemn them anyway for being so cavalier. How often have we encountered someone indifferent to chaos that they might have thwarted, proudly proclaiming that it is ‘not my problem.’ Is it The System that fails, or the people in it?

By the time of Network Paddy Chayefsky’s mordant cynicism couldn’t afford anything like a happy ending. Here we see Dr. Bock not yet ready to give up the fight. Yes, if a psychotic doctor weren’t running amuck, the Manhattan Medical Center would only have to deal with ordinary screw-ups and standard professional lapses. Back in 1971 we weren’t automatically giving up on The System. In today’s world, any film thesis not entirely nihilistic, is something to hang on to for hope’s sake.

The Twilight Time Blu-ray of The Hospital is a fine-looking if atypically plain-wrap encoding of a great picture not as well known as Network. Viewers that know the show only from grimy flat cable TV presentations will be pleased to see how handsome it looks in a good transfer.

A music and effects track gives us the chance to evaluate Morris Surdin’s sparse music score, and the original trailer shows us how United Artists dared to market the movie. Julie Kirgo’s liner notes wade into the entertaining show with plenty of admiration for all concerned. She notes that Paddy Chayefsky’s credit on the film is not ‘screenplay by,’ but simply ‘by.’ We don’t know if he was given that credit or demanded it, but either way it’s well deserved. Any movie where we can applaud a character proclaiming, “I am the fool for Christ, and the Paraclete of Caborca!” is something special.