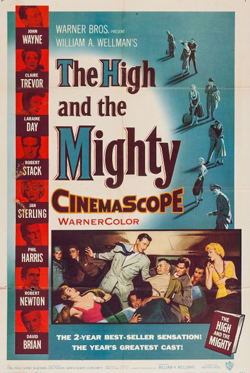 The High and the Mighty

William Wellman’s soap opera in the sky is the granddaddy of disaster films, in particular Airport and its many sequels. John Wayne plays the harried pilot who experiences more than his share of turbulence including jealous husbands and an airliner that is slowly dismantling itself. Claire Trevor, Wayne’s old flame from Stagecoach, is on board along with Robert Stack as The Duke’s nerve-wracked co-pilot. Dimitri Tiomkin’s haunting theme song was nominated for an Oscar.