William Wyler and a trio of fantastic actors make indelible movie history from a grim story by Henry James. How much of love is bald opportunism? How many successes married their way into money? And what’s a lovesick woman to do when a beau may not be true? This may be the key Wyler picture, with the strongest ‘staircase’ scene of them all. One of Hollywood’s finest directors, William Wyler turned out a high percentage of bona fide classics, distinguished adaptations of books and plays. He had great success with actress Bette Davis (Jezebel, The Letter, The Little Foxes) but also provided some of the best roles for Margaret Sullavan (The Good Fairy), Mary Astor (Dodsworth), Greer Garson (Mrs. Miniver) and Audrey Hepburn (Roman Holiday). The Heiress with Olivia de Havilland is yet another triumph, an absorbing adaptation of a Broadway play adapted from Henry James’ book Washington Square. Commercially, the film is a challenge. It takes place in the remote period of the late 1840s. Its heroine is not a great beauty and love does not conquer all.

This may be Olivia de Havilland’s best film, period. It was the only the third screen role film for co-star Montgomery Clift and it cemented his stardom. The real fireworks in the drama are between de Havilland’s character and her father, played by Ralph Richardson in his first Hollywood role. 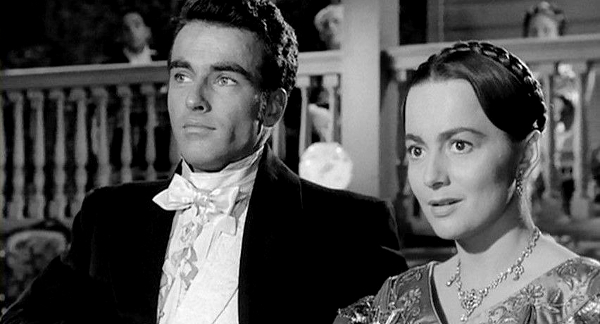 New York’s Washington Square, 1849. Doctor Austin Sloper (Ralph Richardson) idolizes his dead wife and cruelly judges his daughter Catherine (Olivia de Havilland) as inferior in every respect: she’s awkward, plain and a wallflower at parties. He encourages his widowed sister Lavinia Penniman (Miriam Hopkins) to coach Catherine in the social graces. At a party Catherine meets Morris Townsend (Montgomery Clift). The dashing young Morris pays her every attention and quickly avows that he’s in love. Catherine feels she’s found the man of her dreams — no small miracle considering her father’s low opinion of her prospects. But Dr. Sloper thinks Townsend’s whirlwind proposal is far too good to be true … and suspects that the young man is after Catherine’s inheritance.

Ruth and Augustus Goetz’ play restructures the Henry James book, simplifying the storyline and focusing the characters. The play adds an entirely new plot twist, when Morris discovers that Catherine will only inherit a third of what he thought she would.

The film project was initiated by its talent, not the studio. Olivia de Havilland was urged to see the Broadway play and immediately asked William Wyler to do the same. Laurence Olivier recommended Wyler to Ralph Richardson, who didn’t normally leave his stage work in London. Miriam Hopkins had of course starred for Wyler (Barbary Coast, These Three) and served him well in his later films Carrie and The Children’s Hour. Errol Flynn was considered for the Morris Townsend role but backed out.

The playwrights were surprised when the director kept his word and hired them to adapt their play for the screen. Wyler eliminated Catherine Sloper’s final, theatrical dialogue line at the top of the stairs, as his blocking of the situation had already made a powerful statement. This being a William Wyler film, a staircase is the focus of the key dramatic scene.

We’re also told that de Havilland and Clift’s acting styles didn’t mesh. De Havilland arrived ready for Wyler to shape scenes for her while Clift had exactly in mind what he wanted to do. The actress felt that Clift was directing his performance to the camera and not to her. Still, Errol Flynn would probably have been a disaster as Morris — too attractive for Catherine to turn away even if he was a cad. 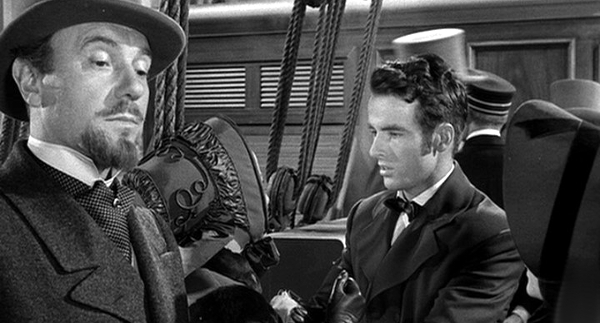 Composer Aaron Copland was on the edge of the blacklist but Wyler made sure that he was hired anyway. Yet the director insisted that the existing theme ‘Plaisir d’amour’ dominate the score. It enters the film sung by Montgomery Clift’s insincere suitor. Perhaps Wyler thought that the song evoked the film’s period. At the last minute, Wyler had part of the title music (very clumsily) replaced with a direct version of ‘Plaisir d’amour.’ Copland was not happy, but was compensated when The Heiress won him an Academy Award.

The show remains impressive today for its profound character relationships, especially between the father and daughter. Dr. Sloper at first seems overly critical of Catherine, whose every public appearance causes embarrassment. The insecure Catherine lacks the temperament to play the role of a well-to-do eligible lady; she’s incapable of hiding her emotions. She is shunned by her peers and must be monitored through the simplest of rituals by her busybody aunt Lavinia. Told at a party to use her fan to keep her hands busy, Catherine rattles it nervously. 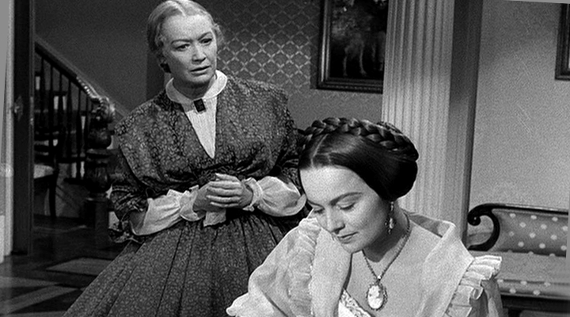 Catherine has no defense against the attentions of Morris Townsend. She’s easily taken in by his skilled flattery, so much so that she almost loses our respect. The doctor sizes up Morris as an unworthy fortune hunter and does his best to quash the romance behind Catherine’s back. The conflict comes as we realize that Austin is highly prejudiced against his daughter, as she’s no match for his idealized, dead wife — whom even his own sister thinks the doctor has over-romanticized. Austin means well but he foolishly thinks that he can control his daughter’s life and that she will somehow still love him for it. This is where The Heiress shows its maturity. Austin needs Catherine’s cooperation to test the young man’s sincerity. But Catherine would never agree to such a thing, or think for even a minute that Morris could confuse his love with monetary considerations.

Dramas of this sort often pose choices between love and money, or love and class distinction. The Heiress compares one kind of love against another. Austin loves his daughter, but the truth is that he doesn’t know her. She becomes convinced that he hates her when he’s still confused and partly obsessed by his dead wife. A drafty sidewalk café in Paris brings forth a ‘ghost presence’ of the dead wife that gives Austin the germ of death. Meanwhile, reports from Lavinia convince Austin that the usurper Morris is already trespassing in his parlor and smoking his cigars. 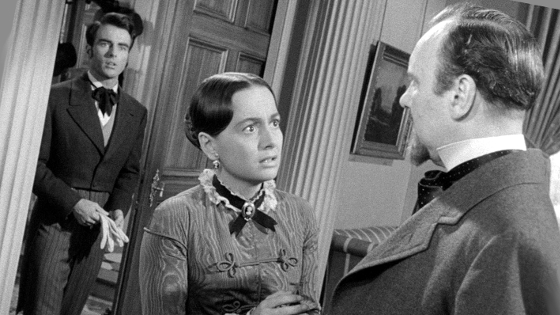 The climax of The Heiress is justly famous, and shattering. One might conclude that the story charts the making of a bitter spinster, which is accurate only up to a point. Catherine has been hurt and abused, but she’s still a realist like her father. The confrontations Catherine has endured have hardened her, but they’ve also shown her what the tyranny of men can be. The cruel conclusion doesn’t necessarily have to be a bad thing — she’ll at last be free, and able to make her own decisions about everything.

William Wyler’s films always seem to be of the highest quality. I find him more consistent than George Cukor, another director known for excellent work with actresses. George Stevens may be technically more fastidious than either of them, but by this time his films were becoming heavier and self-important. Wyler did veer off into message territory every so often (The Big Country), but I still rank him more highly. He could make a ‘wholesome and square’ tale like Friendly Persuasion into a priceless experience.

The Criterion Collection’s Blu-ray of The Heiress, remastered from a 4K scan, is sharper and cleaner than ever before, with its strong soundtrack more distinct than ever. Although composed in the old Academy ratio, the picture looks ‘big;’ Wyler’s sense of depth and Leo Tover’s deep-focus cinematography place us in scenes as opposed to simply observing them. The sets for the Washington Square town house are beautifully designed — the camera never seems restrained, and the angles don’t make us feel as if walls have been removed.

The Criterion disc producer has found prime video of de Havilland and Wyler, mostly in a casual context. The actress appears on a segment of The Merv Griffin Show with Bette Davis and Walter Pidgeon, and is graciously received by a rather fawning Paul Ryan on a marginal surviving tape from his show. Wyler’s AFI acceptance speech is here, along with a pleasant interview with actor Ralph Richardson. A studio short subject about costume design features Edith Head. A new featurette about the costumes hosted by Larry McQueen makes the subject accessible to non-fashion conscious viewers.

Best of all is an analytical discussion of the movie between critic Farran Smith Nehme and screenwriter Jay Cocks, who co-wrote a comparable period picture about a stifled romance, The Age of Innocence. They offer context explaining how the character of Morris Townsend changed from the book to the play and finally to the film — he’s much more obviously a fortune hunter in his earlier incarnations.

Pamela Hutchinson’s insert essay provides much the same insights for The Heiress, and details the film’s production history as well as an overview of Olivia de Havilland’s stellar career.

Thanks to David Fletcher, Alan Gomberg and Robert Gutowski for corrections.