The sequel to the epic Julie Andrews road show picture wasn’t a hit, but it tells a good story of its own. Charlton Heston is okay but the central character is a Chinese immigrant played by Tina Chen. Against all odds, the peasant matriarch survives plagues and leprosy to found a family dynasty for the new Hawaii. 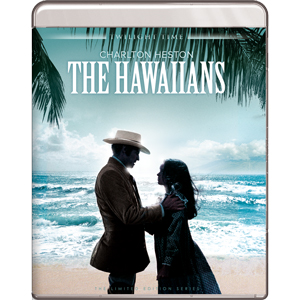 Walter Mirisch’s dream producing project Hawaii was held up for a considerable time before it was decided to film only one of its multi-generational stories. Starring Julie Andrews, Richard Harris and Max Von Sydow, the road show attraction was directed with authority by George Roy Hill and became one of the more successful releases of 1966. By comparison with the first picture, Mirisch’s follow-up was a much less problematical production, but the final product was in all respects a letdown from the first show. Star Charlton Heston is the only bankable name and he’s only one facet of a complicated story that’s really about the fortunes of a family of Chinese immigrants. 1970’s The Hawaiians earns points for sticking to James Michener’s storyline, but the overall effect is of a TV movie of the week filmed on attractive Hawaiian locations. 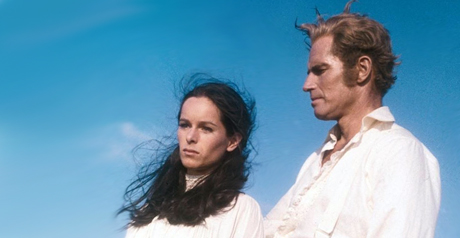 The story is two generations removed from the events of the first film. The sons of Rev. Abner Hale and Captain Rafer Hoxworth (Max von Sydow and Richard Harris in the first film) are major landholders and businessmen in Honolulu. Queen Liliuokalani (Naomi Stevens) would like to see the American presence on the island lessened, not augmented. Hoxworth’s grandson Whip Hoxworth (Charlton Heston) returns from sea with his cargo hold packed with Chinese peasants, indentured for work on the islands but treated like slaves. A woman has hidden herself among the men, Nyuk Tsin (Tina Chen). To protect her, peasant Mun Ki (Mako) pretends she is his wife. Whip takes them on as servants, and they are happy to live in his firewood shed. Mun Ki has children with Nyuk Tsin, but since he has a real wife back in China, he insists the she act as ‘Auntie’ to her own children. Meanwhile, Whip is pushed out of the lucrative shipping business by his relatives, on the grounds of moral turpitude. He has a son, Noel, by his Hawaiian wife Purity (Geraldine Chaplin), but after a nervous breakdown she turns him from his bed and eventually leaves to live with her native relatives. Stuck with thousands of acres of barren real estate, Whip finds water, imports Pineapple plants from the West Indies and with Nyuk Tsin’s help, begins a massive farming operation. The story continues for roughly thirty years, into the 20th century, with episodes involving leprosy, Whip’s eventual taking of a Japanese mistress, Fumiko (Miko Mayama), the effort to have Hawaii made an American territory, and the troubled courtship between the grown-up Noel (John Philip Law) and Nyuk Sin’s daughter Mei Li (Virginia Ann Lee). That, and the overcrowding in the downtown Honolulu slum Hell’s Half Acre brings on the threat of the plague. 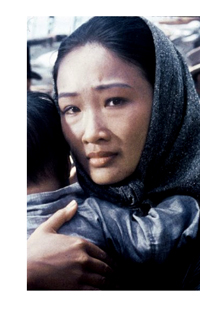 The Hawaiians has enough ingredients to make a great picture, and in fact is thematically more courageous than most movies around its time. At least 60% of its storyline involves Asian characters, as the second half of the 19th century was marked by major immigration from China and Japan (and even a little from Russia, although not presented here). The nominal hero played by Charlton Heston takes an emotional back seat to the real star of the show, Chinese-American actress Tina Chen. Her Nyuk Tsin works her way from virtual slavery to financial independence, raising a family while spending years in exile in the leper colony on Molokai, the ‘island of the damned.’ Her talents help Whip Hoxworth establish his pineapple empire, and her family-based wisdom — “Five sons, all smart!’ — builds a dynasty from nothing, in just one generation.

The show is fitfully engaging and entertaining. It has two problems, however, both of which point up the absence of a strong, guiding creative input. James R. Webb’s screenplay connects all the dots story-wise, and does a reasonable job of skipping through the years with its sprawling narrative. But it lacks depth most every step of the way. We’re told too many things that we ought to be shown. Why are Whip’s relatives and business partners really out to persecute him? We have no idea how they live. Whip tells us that he’s a social outcast because he has a Japanese mistress. Was there no disapproval when he married the Hawaiian princess, Purity? Is Purity really crazy through inbreeding, or are there other reasons she rejects Whip and goes back to live with nature on the beach? Charlton Heston’s character achieves a lot, but he never undergoes a major trial, or really has cause to question himself. It’s a narrative with many little conflicts, but few in which we can personally invest. We’re impressed when Nyuk Tsin decides to leave everything to take care of her (non-) husband on Molokai, but we don’t necessarily understand her decision. Why is she so committed to him, when he values her so little? Isn’t her best bet to stay behind to help her children? Nyuk Tsin’s character is by far the film’s most appealing, but even with Tina Chen’s good performance we have to take her wisdom for granted.

The other issue is the choice of director. Charlton Heston had a lot of influence on the directors of his movies, from Orson Welles to Sam Peckinpah to Guy Green, who directed him in a previous film about a Hawaiian pineapple grower, Diamond Head (1962). Writer-director Tom Gries worked well for Heston on the fine western Will Penny, so he got tapped for this super-epic. The direction is completely undistinguished. Gries manages to make expensive locations in the Hawaiian Islands look like they were filmed in Hollywood. The movie is in Panavision but never looks big, and lavish set pieces such as the burning of Hell’s Half Acre are filmed with little feeling. He just plants the camera for a close-up, two-shot or wide shot and says action. Typical of the judgment calls that undermine the picture is the constant use of meaningless helicopter shots. They pull us out of the drama instead of into it, and give the film a modern look at odds with its period setting. The movie is over two hours long, but Gries’ choice of staging doesn’t let us feel that we know where we are. Where exactly is Hoxworth’s pineapple farm? Is Honolulu a larger city, or just the clutch of storefronts we see? 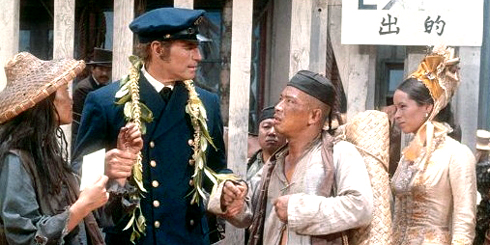 The film doesn’t have many characters, yet with the exception of Whip and Nyuk Tsin we learn little about them. Mako’s Mun Ki is an ignorant little guy who never seems to appreciate his common law wife, even when she sacrifices herself to care for him in a tent on wind-swept Molokai. Geraldine Chaplin’s Purity is given the minimum of screen time to establish her mysterious frigidity. It’s blamed on heredity but for all we know she could be rebelling against the childbirthing experience. Or for that matter, she may just be tired of her huge ‘haole’ husband.

A case in point: near the end we meet Queen Lilioukalani, as she tries to head off a bloodless coup that overthrows her monarchy. The big scene has almost zero preparation. It’s the first time we’ve seen the queen with the name that sounds like a song lyric. We aren’t really aware what kind of government is in place, and we haven’t been told about Whip Hoxworth’s secret deals with the (unseen) forces of the United States. The scene is over before we’ve fully realized that this is the granddaughter of Malama Kanakoa (Jocelyn LaGarde), a beloved character from the first film. And then we recognize the actress playing Lilioukalani, Naomi Stevens… she’s Mrs. Dreyfuss, the doctor’s wife with the chicken soup from The Apartment: “Mildred!” In all seriousness, the show doesn’t really address the fact that, even before the 20th century has arrived, the indigenous Hawaiians are already non-entities in their own islands. Alexander Payne’s comedy The Descendants gives us much more of a handle on Hawaiian history, from a contemporary viewpoint.

Alec McCowen’s Micah Hale is a one-note character, and John Philip Law is little more than okay in the under-written role of Whip’s son. Noel asks his dad if he really killed a man while stealing pineapple plants from halfway around the world. Whip says ‘yes,’ the question is closed, and another possibly meaningful character interaction is avoided. Around the periphery we get most of the Hollywood Asian actors not in Flower Drum Song, mostly un-billed. Tom Gries’ talented spouse Mary Munday, plays Micah Hale’s sweet wife. Charlton Heston’s old adversary from The Greatest Show on Earth, Lyle Bettger, has one or two lines, but James Gregory is barely seen. Was The Hawaiians cut down from a much longer road show version?

The show uses some pretty startling makeup to depict the effects of leprosy, an affliction easily cured today. The last time we see Mako, his face looks like The Incredible Hulk. That angle is fairly well judged, but the film’s bits of nudity are not. Whip Hoxworth meets the desirable Fumiko by literally watching her step naked into his bath, which director Gries shoots in a frontal shot that just seems cheap. As actress Miko Mayama only has two more brief scenes,  we’re likely to remember her as little more than a nude pin-up. Or, to be kinder, is Ms. Mayama’s contribution a placeholder for the many sex encounters in Michener’s book? Fumiko knows darn well that Hoxworth is in the bath when she chooses that moment to display the goods — was it her bid to get free of a life of drudge labor?

The artlessness extends to the abrupt conclusion, wherein Nyuk Tsin and Whip affirm their mutual affection in a post-fire negotiation for a loan to rebuild. In terms of character blocking this last character interaction resembles the momentous finale of Luchino Visconti’s The Leopard, which also has a satisfied old man going his own way, the master of his unstable domain. But director Gries gives the moment no special emphasis whatsoever. When the cast list crawls up, we really expect a card to say, ‘come back next week for more eventful but drama-challenged stories of Hawaii.’

The Twilight Time Blu-ray of The Hawaiians is a beautiful encoding of this colorful show, filmed by two top-notch cinematographers, Lucien Ballard and Philip Lathrop. Having missed it in the theaters — exhibition broke down so badly in 1970 that many big pictures got spotty distribution in the sticks — I’ve only seen parts of the film pan-scanned on old TV broadcasts. With added commercials it was just unwatchable. This handsome disc presents the show in great shape, with a strong mono soundtrack.