“To really live, you must almost die,” sings Marty Robbins, a lesson learned by Austrian import star Maria Schell. Delmer Daves’ best western puts virtue and faithfulness to the test: Gary Cooper’s distrustful, manipulative doctor hides his dark secrets and punishes those that admire and love him. Yet the ultimate reckoning demonstrates that sins can be forgiven and goodness rewarded, even in a corrupt and lawless community. That’s a fairy tale I still want to believe in. 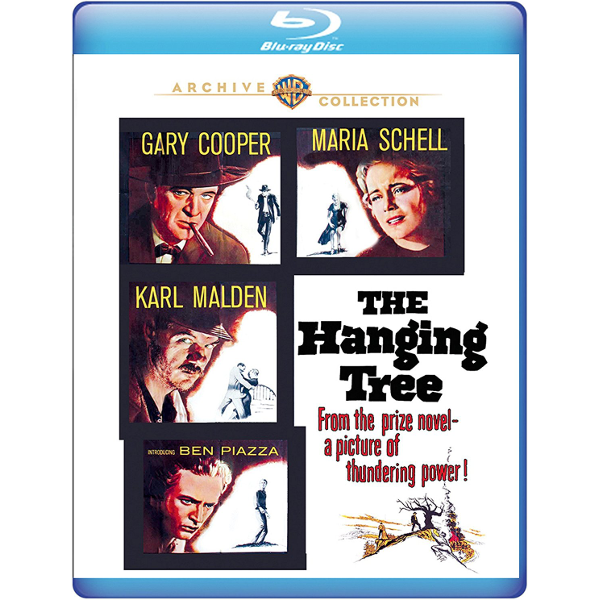 Last year the Warner Archive Collection brought scores of favorite features to Blu-ray, and 2018 sees no let-up in the flow. This particular classic western is particularly gratifying because just ten years ago it was a serious problem from a restoration point of view. A welcome 2012 DVD had a good but not spectacular transfer, but I’m happy to report that the new Blu-ray appears to be a much-improved encoding.

Writer-director Delmer Daves worked his way up the Warners ladder when the studio system was in full swing, and in the 1940s first made his mark with impressive original screenplays. He was soon directing as well, scoring more hits than misses, especially with sensitive stories about young people caught up in the war. In the 1950s Daves’ most visible successes were in the western genre. He initiated a trend with the pro-Indian western Broken Arrow and garnered praise with his excellent 3:10 to Yuma. In the last ‘act’ of his writing-directing career Daves embarked on a series of increasingly trashy young love movies, beginning with the tawdry but amusing A Summer Place. But first he made what might be his best all-round picture, 1959’s The Hanging Tree starring Gary Cooper. The unusually structured drama may not be perfect, but it’s one of those movies that makes a deep emotional impression.

Mining camps pop up in the Wyoming territory of 1873, leapfrogging across the landscape from gold strike to gold strike. Wherever some lucky miner hits pay dirt, a roughhouse community springs up, to last three years or only a few months. To the temporary town of Skull Creek comes Dr. Joseph Frail (Gary Cooper). He buys a cabin to receive his patients. He charges to lance a boil for the rambunctious Frenchy Plante (Karl Malden) but donates his services to an undernourished child. Doc Frail’s dark side comes to the fore when he blackmails wanted thief Rune (Ben Piazza), forcing the boy to serve as an all-round helper. A stagecoach robbery leaves the immigrant ‘lost lady’ Elizabeth Mahler (Maria Schell) severely sunburned, temporarily blinded and suffering from dehydration. Frail and Rune care for the woman alone, adding new gossip to the local rumors about Frail’s murky morals. Elizabeth recovers. She’s soon thoroughly enamored of the Doc, but can’t understand why he rebuffs her attempts at a deeper relationship. Frail secretly bankrolls her mining partnership with Rune and Frenchy, leading the local wags to assume that she’s a kept woman. When Elizabeth discovers this, she swears to pay the money back — and challenges Doc Frail to explain why he makes people love him, only to push them away. 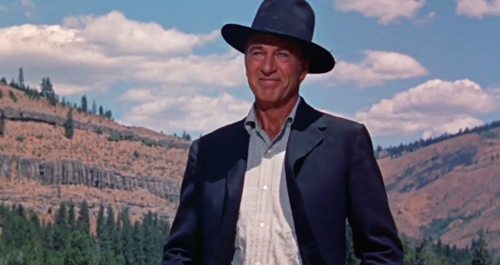 Delmer Daves didn’t write the superior scripts for Broken Arrow, 3:10 to Yuma or The Hanging Tree, but this movie may be his best work of direction. Almost every scene makes dynamic use of beautiful Northwestern locations. Situations that might be mawkish are visually and dramatically powerful, such as when the sun-blinded Elizabeth stands terrified at the edge of a cliff, overcome by the noises of the mining camp below her. The Hanging Tree is sentimental without being sappy and can be surprisingly tough-minded about human nature. Skull Creek is a concentration of avarice and restless energy, and violent action is common when the miners get liquored up. The instability is anarchic, irrational. A celebration for a major strike quickly becomes a riot in which the participants rush to burn down their own town.

Intolerance abounds as well. The respectable storekeepers the Flaunces (Karl Swenson & Virginia Gregg) are quick to tar Elizabeth with the brush of sin. The unpleasant gambler Society Red (John Dierkes) spreads the legend about the mysterious deaths of Doc Frail’s wife and brother, ten years previously. Causing even more trouble is a deranged preacher jealous of Frail’s medical skill, George Grubb (George C. Scott in his first screen role). Receiving prominent billing but barely visible in the film is favorite actor King Donovan. His role, if he had one, must have fallen victim to the cutting room — he’s always present but has little to do.

Representing the ‘normal’ miners is Karl Malden’s Frenchy, whose lusty appetite runs to rape when the time and place feel right. Malden rarely played a villain like this one —  Frenchy is at best a reckless clown, and when drunk he knows no boundaries at all. If Frenchy is a typical Gold Rush type, Doc Frail has plenty of reasons to be cynical about the human condition.

The gold town is an unflattering metaphor for the ‘fifties, with America engaged in a venal free-for-all. The camp has its gambling and prostitutes, and the miners are an uncouth rabble. The notion of puritan decency is used as a weapon by the blue-noses, and seized up by opportunists when needed — as when both Society Redd and George Grubb concentrate on the ‘evil’ doctor to relieve him of his money and his life.

Watching Austrian actress Maria Schell is a joy. Schell made popular European movies but also a number of prestigious art films, including Luchino Visconti’s tragic Le notte bianche and René Clément’s sad Gervaise. Richard Brooks’ The Brothers Karamazov was her major Hollywood debut. Her ‘Lost Lady’ Elizabeth Mahler is transcendent, one of the most soulful and vibrant women in American westerns. Ms. Schell does not fall back on her sweet smile, as she perhaps does too often in some other pictures. See also Maxmillian Schell’s engrossing docu on his famous sister, for Schell’s candid life story and rare film clips.

Although unaware of it at the time, Cooper was only a few pictures away from an early death. He had won two Best Acting Oscars and was trying for more quality roles. He doesn’t employ his familiar ‘cute’ act here, where he assures audiences that he’s still the lovable good guy by slipping in endearing little-boy mannerisms.

Cooper’s Doc Frail comes off as an unhappy man with dark secrets and an unhealthy desire to control people. Frail is almost a Byronic personality: psychologically wounded and cruel in his dealings, yet tender and caring underneath. He makes Rune suffer as an involuntary indentured servant, and continually rejects Elizabeth’s sincere affection. How do we know Frail will see the light? Because it’s Gary Cooper, dummy. 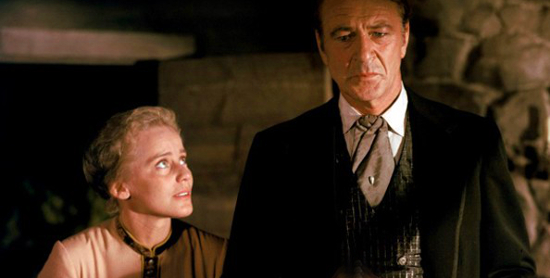 Delmer Daves never got much respect from the first wave of ’60s film critics. Andrew Sarris memorably wrote that Daves’ direction for The Hanging Tree was debased by his over-use of the camera crane. It’s a valid point. All through the picture, a crane is used at every opportunity, even for brief cutaways: ‘Look, I’ve got SCENERY!’ Perhaps the Montana wilderness suffered a severe gravity shortage?

The Hanging Tree saves most of its violence for the finish. The gunplay and mayhem is short and sweet, as in Johnny Guitar but without that film’s political edge. It’s easy to interpret the movie’s Skull Creek as a representation of America as a madhouse full of greedy, lawless maniacs. The film’s ending is sublime, almost Biblical in its purity. What will redeem a man who no longer believes in love or trust? Cooper and Schell make us believe one of the best-earned romantic finishes in the era of the classic Big-Sky ’50s western. 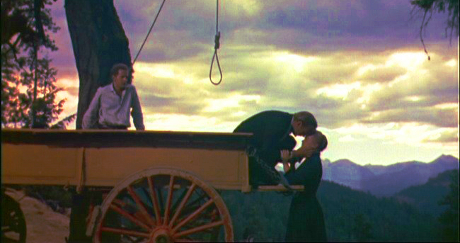 The Warner Archive Collection Blu-ray of The Hanging Tree betters the partially restored version seen on their 2012 DVD. After a somewhat contrasty title sequence the show settles into richly colored, sharp images of a mountainous mining region with little level ground. The earth looks wet and the wool suits damp. Ted McCord’s cinematography was originally printed in Technicolor, and this color timing and encoding finally brings out the delicate, sometimes hazy textures in the mountain light.

The widescreen image restores a theatrical feel to compositions — perhaps it will now be possible to forget the boxy, cramped look of old TV presentations. The disc’s only extra is the original trailer. This title was an early ‘gotta have’ for DVD Savant and plenty of other fans of westerns and Gary Cooper. It’s his classiest career-end performance this side of William Wyler’s very different Friendly Persuasion. I didn’t see it until the 1980s, but I remember old TV Guide blurbs that heralded it as a superior product, and singled out Maria Schell’s performance.

The final adornment is Max Steiner’s BIG western score, which sounds very much like the tunes Warners was cooking up for its TV shows of the time, Maverick, etc.. The orchestrations would seem exaggerated if the film’s emotional pitch didn’t match them right down the line. The ‘wagon train’ theme is not particularly subtle, but the sensitive violin music for Elizabeth is excellent — helping her scenes of recovery and loss. The film is bookended with a pop western ballad written by Jerry Livingston and Mack David, and sung by Marty Robbins. The song is plenty corny, yet absolutely right for the movie. Even the overly literal lyrics are a perfect fit, especially at the exultant conclusion. Blazing Saddles would later make a campy joke of anachronistic Frankie Laine and Marty Robbins western ballads, but we still love them. The nostalgia factor is strong in 3:10 to Yuma and Gunfight at the O.K. Corral: the main themes for each are guaranteed to transport older American western fans back to great memories. 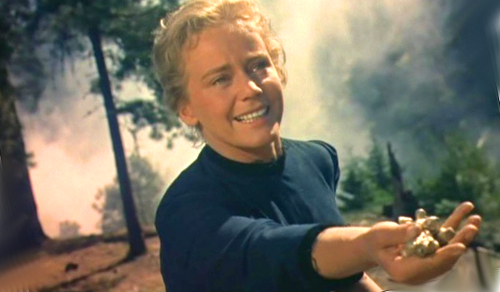 The Hanging Tree didn’t spell success for Gary Cooper’s co-stars. The excellent Ben Piazza, like Ron Starr of Peckinpah’s Ride the High Country, was primed for a big film career that never arrived. Piazza certainly worked constantly on TV, but his film roles weren’t the best. The two I’ve caught were his fussy maitre d in The Blues Brothers and his psycho who mutilates Liza Minnelli with acid. Neither part shows what Piazza could do.

I guess the same can be said of the wonderful Maria Schell. She’d unfortunately go directly from this to Anthony Mann’s Cimarron, a half-hearted MGM epic that did her career no favors. The radiant star eventually ended up in Jesús Franco movies. A visit to the IMDB shows that she’s now best known for her brief cameo in Superman: The Movie.