The Film Noir Foundation puts across more impressive rescues in concert with the UCLA Film and Television Archive: a pair of independently-produced noirs released by Monogram in 1947, modest of budget but firmly rooted in the noir style. The Guilty is a Cornell Woolrich ‘ironic twist’ mini mystery involving troublemaking twins and a soldier suffering from PTSD. High Tide is a hardboiled corruption tale starring the king of smart-talking newsmen, Lee Tracy. Especially rewarding disc extras give us long-form visual essays on Cornell Woolrich, actor Tracy, producer Jack Wrather and the ‘international’ director John Reinhardt. The disc boutique Flicker Alley once again delivers exactly what noir lovers crave — exotic productions not aligned with big studios, and rescued from oblivion by archives, restoration specialists and The Film Noir Foundation. This time we’re rewarded with a pair of independent films released by Monogram Pictures. They apparently remained in private hands . . . and were discovered in good condition, properly stored for over sixty years.

Just like the rest of Hollywood, Monogram enjoyed an immediate post-war production boom. The industry chalked up two full box office years before rising costs and the threat of Television slowed things up. The Bowery Boys series paid Monogram’s electric bill, and outside producers ‘dropped by’ to make pictures with various degrees of Monogram participation: the King Brothers (Dillinger, Suspense), ex- Universal contractee Jack Bernhard (Decoy, Violence). Monogram’s in-house boy wonder Walter Mirisch launched his long career with a pair of micro-budgeted noir murder tales, Fall Guy and I Wouldn’t Be in Your Shoes, both from short stories by the dean of ‘Black Mask’ writers, Cornell Woolrich.

The allure of Hollywood attracted business entrepreneurs from other industries. Texas oil man Jack Wrather came to town, fell in love with ex-child star Bonita Granville and started producing independently. His first three pictures were distributed by Monogram, the first two were films noir and the first was from a story by . . . Cornell Woolrich. New bride Granville starred in only one of the shows but Wrather did his best to promote the career of actor Don Castle, a not-bad leading man whose screen appeal never quite took off. 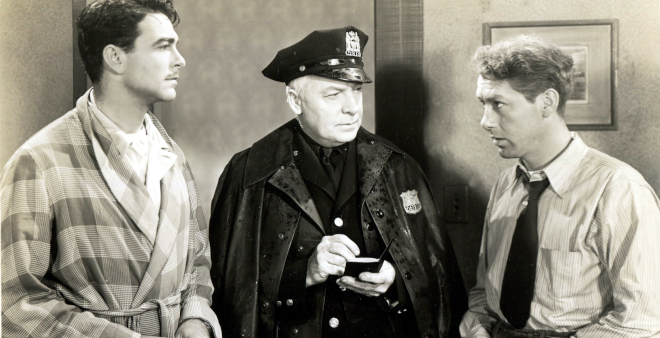 For both of his noirs, Jack Wrather assembled a competent crew led by director John Reinhardt, a former specialist in multi-lingual production who had worked in several foreign countries. The Guilty takes on a Woolrich story that can best be called convoluted. Screenwriter Robert Presnell Sr. (Employees’ Entrance) wastes no time before beginning a flashback. Mike Carr (Don Castle) explains that six months ago he was studying on the GI Bill and living with his nervous Army buddy Johnny Dixon (Wally Cassell of White Heat). The young men are tangled up with beautiful twin sisters, the Mitchells (Bonita Granville): one is good (Linda) and the other nothing but trouble (Estelle). When Linda is found strangled, the dogged Detective Heller (Regis Toomey) looks to Johnny, whose behavior invites suspicion. Mike tries to clear Johnny by investigating Alex Tremholt (John Litel), a roomer in the Mitchell apartment. The erratic Johnny obtains a gun and even threatens his roommate. Estelle continues to shake things up by forcing her attentions on Mike. Both men had been mostly attracted to Linda.

Director Reinhardt gives The Guilty a good look overall. An excellent opening sequence shows Mike returning to the neighborhood after six months away; in the morgue, Detective Heller recites an unusually graphic verbal description of the wounds sustained by the murder victim. Although the low budget keeps everything limited to a scant few sets, the series of ‘twist’ reveals at the finish are carried off in style.

The show does suffer a bit from narrative problems common to flashback stories — with precarious character logic, ‘twist #3’ at the finish reveals that most of the film’s running time has been a Hitchcockian untrustworthy flashback. Don Castle and the director can do little to soften this disruption; it’s as if we need to see the whole show again to find out to what degree ‘reality’ has been cheated.

Just one split screen shot places both sisters on the screen at the same time. Since we barely get to see the ‘good’ Linda, we don’t feel her influence the way we do that of the ‘bad’ sister. Convinced of her own irresistibility, Estelle is clearly manipulating both young men. Wally Cassell has little choice but to overact to make Johnny stand out. We see a rather graphic suicide but are told that the victim survives: the odd way that plot thread finishes makes us suspect that the Production Code mandated a story change with some altered dialogue. The show ends up a polished item that’s marginally more satisfying than Walter Mirisch’s first Monogram noirs named above. Yet it still plays as a stylish ‘tricky’ twist story. The leading characters never come into full focus, or grab us emotionally. The best impression is made by the veteran Regis Toomey, whose knowing gaze and assured manner walks away with the movie while clarifying its pretzel storyline. 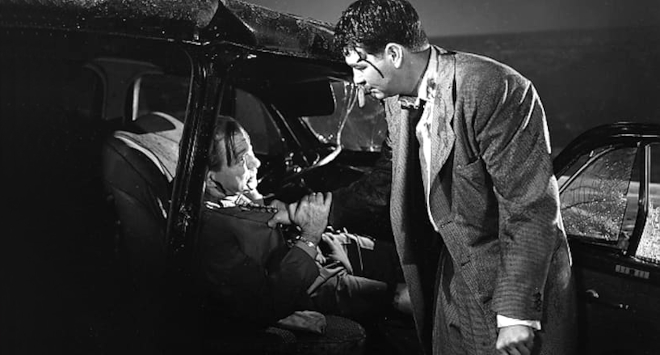 More conventional yet more satisfying is High Tide, filmed by much the same crew but given substantially higher-tier production values — more elaborate and varied sets, a larger cast and a faded star in the key role.

Excellent location work and process stage filming begins High Tide with another ‘flashback bookend’ structure, this one more arresting: pals Tim Slade (Don Castle) and Hugh Fresney (Lee Tracy) have rolled a car over a Malibu Cliff. Neither can budge: one is maimed and the other’s leg is pinned under the wreck. They can only wait as the tide comes in to drown them both. (The same concept was utilized for the 1953 noir suspense item Jeopardy, by director John Sturges.)

Ladies’ man Tim knows something’s wrong in the whole setup. Clint’s wife Julie (Julie Bishop of The Black Cat and The Threat) openly propositions Tim in her husband’s presence, while Tim finds himself interested in Clint’s lovely secretary Dana (Anabel Shaw of Gun Crazy) — who he finds in the company of Nick Dyke. Tim wants to know about some mysterious ‘important papers’ that the retired newsman Pop Garrow (Francis Ford) is secretly safeguarding for Clint.

A brutal murder occurs right in the newspaper building, and the cynical Inspector O’Haffey (Regis Toomey) finds that most of the facts point to the sharp-talking Tim. Tim makes himself look even more guilty when he discovers another murder, and flees with O’Haffey’s gun.

High Tide gets plenty of mileage from the hardboiled pitch of the dialogue — neither Tim nor Hugh seem capable of saying things in plain English. Star Don Castle fares better in this show, due to Tim Slade’s more straightforward character. The great Lee Tracy lays on the ‘Front Page’ patter and attitude in high style. The actor’s high-class professionalism (and that of Regis Toomey) may be responsible for the overall consistent performances. Everyone is good, and both Julie Bishop (unstable, tricky) and Anabel Shaw (charming but potentially suspect) make positive impacts.

This may be a lowercase noir, but its mystery unfolds rather well. The only production weakness to speak of are some hazy rear-projection setups to place actors in Union Station, where Pop Garrow stashes the valise with the ‘important papers.’ Much better process illusions provide impressive ocean backgrounds for the dramatic action in the wrecked car on the beach. Death and beaches go together well in film noir.

Fitting in nicely are an abbreviated performance by old favorite Francis Ford, and a wrenching bit by Argentina Brunetti (It’s a Wonderful Life, The Brothers Rico). Her hysterical wife blames Hugh Fresney’s circulation-building headlines for helping railroad her husband to Death Row. When she breaks down, Hugh is quick to make sure the paper gets a picture of the ‘grieving widow.’ 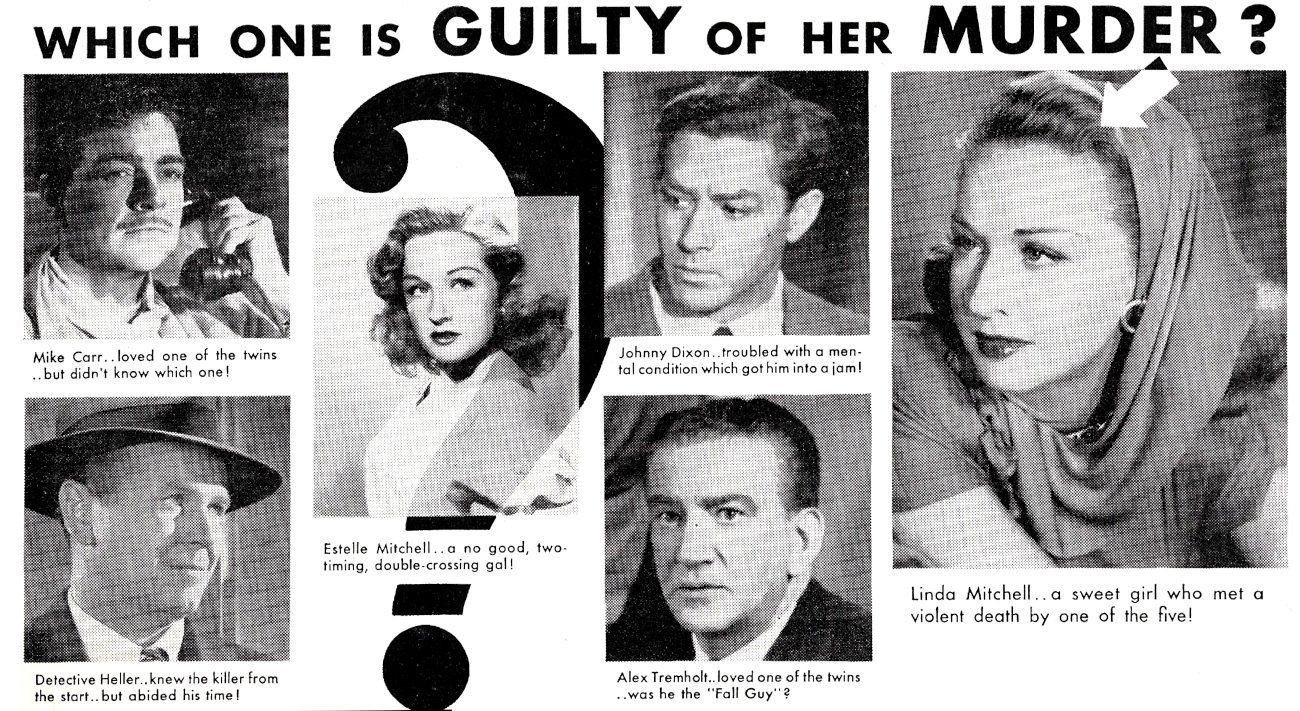 Flicker Alley’s Blu-ray + DVD of The Guilty + High Tide will delight collectors eager to explore the rewarding fringes of the noir style. The encodings appear to come from flawless pre-print material. The final images are so pristine that we can perceive the B&W grain that gives everything such varied textures.

The assumption that the archive source was English comes from the BBFC ‘A’ certificates at the head; we don’t know if original Monogram logos were cut off, or if independents distributed by Monogram didn’t carry company logos. The audio is excellent as well. We sometimes forget that Monogram and Republic were just as technically proficient as the big studios — the difference came with the budgets, the scripts and the actors.

Flicker Alley puts both features on one disc with extras; the relatively short running times leave plenty of space. A clean main menu leads to an ‘extras’ page listing an ‘intro’ and four new featurettes that cover unusual subject matter. All play as polished visual essays, part-lectures and part slide shows; a couple are almost 40 minutes in duration. The stellar lineup of noir experts is below in the ‘supplements’ list; Eddie Muller delivers the general intro, warning us that the featurettes are spoiler-laden.

The most academically rewarding extra is the long piece on the fascinating writer Cornell Woolrich, illustrated with terrific book covers and copious film clips from movies adapted from his work, even Rear Window. The biographical detail is thoughtful and sensitive: Alan K. Rode tells us that the revelation of Woolrich’s sexual orientation came mainly from just one source, which may or may not be the definitive truth. 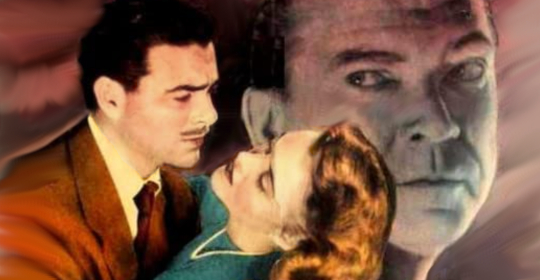 The longform piece on Jack Wrather has plenty of Wrather family involvement and is less critical. The basic facts suggest that the millionaire entrepreneur made money, stuck by his friends, took bold chances (he OWNED the Disneyland Hotel). He dabbled in Hollywood movies, had big-time sucesses in television and carried on a non-scandalous social life in Palm Springs.

Imogen Sara Smith introduces newcomers to star Lee Tracy, a colorful personality who cornered wisecracking newsmen in pre-Code cinema. Ms. Smith has a talent for describing movie personalities with uncanny accuracy. The fourth, longer piece throws a wide net to get a handle on the elusive director John Reinhardt. More than just a specialist in Hollywood ‘foreign versions,’ Reinhardt also worked in Europe and Argentina, building an artist’s reputation that wasn’t recorded fully in English. The input of the Argentina-born scholar and lecturer María Elena de las Carreras would seem essential — many of the images and film clips shown clearly came come from specialized sources.

As if that weren’t enough, both The Guilty and High Tide carry full commentaries. I listened to big parts of each and didn’t run into much redundancy. There must be four full hours of quality extra material on this disc.

Disc extras are not all created equal, and the experienced producer Steven C. Smith shows up on the credits of several of these superior video pieces. The team behind this presentation really give noir fans a reason to pay attention. No dumb ‘is it noir or isn’t it noir’ questions, just reliable insight and research.