It’s Tab Hunter as you’ve never seen him before! Antonio Margheriti’s limp but colorful Arabian Nights adventure romance is a real head-scratcher — it’s an entirely generic kiddie show, filmed on nice locations, and devoid of style or flash. Some of the sub-Bava effects are clever, but the only ‘magic’ element is the decision to re-voice Tab with an off-the-shelf dubbing artist… it’s as if Hunter has been sucked into a ‘scimitar & sandal’ episode of The Twilight Zone. 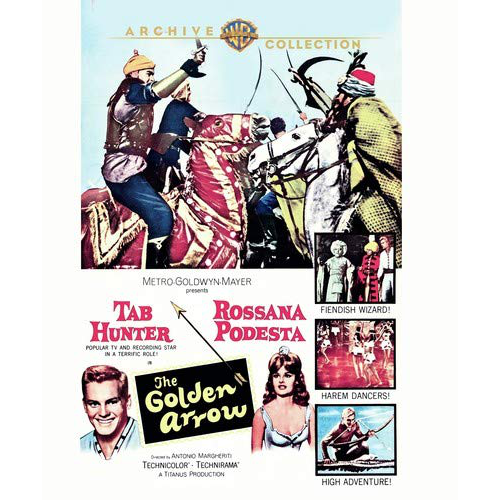 A look at film logs from around 1960-1963 shows that Hollywood studios looking for cheap product purchased or co-produced scores of costume adventures through Italian studios, following the lead of Hercules, the Joseph E. Levine acquisition noted for earning untold millions from a minimal investment. Hollywood had previously produced ancient epics in Italy with not-bad results; even Robert Wise (Helen of Troy) and Howard Hawks were seduced by the idea of directing enormous productions that could become international hits. By 1962 or so there was a glut on the market for assembly-line sword & sandal tales as predictable as Hollywood B westerns; it seemed insane for Titanus and 20th Fox to lavish big $$ on Sodom and Gomorrah, when the market perception was that only a couple of star names separated the film from low-grade product. The Italian-produced The Golden Arrow plays as if it were a contract-killer for a Titanus-MGM deal. The only marquee attraction is Tab Hunter, and by 1962 he was no longer a major draw, exactly. There’s a definite disconnect between the quality of the production (quite high) and the personnel behind the camera.

As is typical, a full five writers are credited with the script — all have mid-range credits. Perhaps because of the special effects connection, U.S. fans will note names connected to Mario Bava. Writer Filippo Sanjust contributed to Caltiki, il mostro immortale, and art director Flavio Mogherini helped make Diabolik into a dazzler. Editor Mario Serandrei’s name is on so many Italian productions that I’m tempted to think he ran an ‘editorial boutique,’ supervising multiple editing rooms.

Story-wise The Golden Arrow is a variation on The Thief of Bagdad … ‘The Bandit of Damascus,’ perhaps. The original Italian title translates as The Archer of a Thousand and One Nights. Once again, a beautiful princess is being auctioned off to various suitors. Princess Jamila (Rossana Podestà) watches to see which prince of the realm can handle a sacred bow; the usual suspects candidates can’t even pull the string. But a surprise winner shoots the arrow with ease. Even more surprising, he turns out to be the Bandit Hassan (Tab Hunter), and proceeds with his gang of cutthroats to kidnap Jamila right from the dais. This angers the vizier Baktiar (Mario Feliciani), who is conspiring with the more brutal of the suitors to take over the kingdom.

As it turns out, the handsome Hassan is a sentimental softie; he almost immediately takes Jamila back to her home, much to the ire of his band of thieves. Baktiar’s guards place Hassan in a dungeon with hungry crocodiles, but Jamila’s prayer to Allah causes three stars to turn into amiable genies. They whisk Hassan to freedom and send him on a quest to find/procure/steal The Golden Arrow, an invincible weapon. Meanwhile, the three suitors each search for a superlative gift, with which to earn the Jamila’s hand.

The Golden Arrow is not particularly good, or even memorable, but at this writing it’s one of the best-looking examples we have of the heroic Italian costume drama of the period. Beautiful remasters have been made of many of the Italo westerns that would take over in a couple of years, but few of the Greek / Roman / mythological fantasy pictures have been restored — not even the big titles Hercules and Hercules Unchained. Relatively speaking, the show is lavishly produced. Instead of half-frame Techniscope, Arrow was filmed in Technirama — the large-format VistaVision given an extra squeeze. The colors are brilliant and the image is often as sharp as a tack, although Margheriti encounters occasional trouble with tight insert shots. Some of the sets are stylish, and extensive use is made of actual Egyptian ruins. Tab Hunter got a hell of a fine break from Hollywood smog, for this one. Antonio Margheriti has a solid name among horror and sci-fi fans, so they may want to add this show to their collections. On the other hand, despite enthusiastic performances by Tab Hunter and Rossana Podestá, Margheriti doesn’t offer much in the way of style or punch. Admittedly, the script is pedestrian and literal minded. The three magic gifts are a flying carpet, an all-seeing crystal ball and a potion that revives the dead, but their discovery is fairly ho-hum, especially compared to the wondrous magic of the Douglas Fairbanks and Michael Powell Arabian Nights stories.

Tab Hunter is certainly a favorite – he knew that he was a performing lightweight in many of his early pictures. TCM showed us how painful he could be in the all-around incompetent movie Return from Treasure Island (1954). I have personally been a fan of Hunter since seeing Damn Yankees as a kid. The docu Tab Hunter Confidential demonstrates what a sensible, extremely likable guy he was. I can see Hunter going into a potential clunker like Arrow with a good attitude and a smile. His Hassan is an impossibly blond blue-eyed Arab — Damascus by way of Laguna Beach — but such things were par for the course. He looks as appropriate to the part as Jeffrey Hunter in King of Kings.

Rossana Podestá made a perfectly fine Helen of Troy in the Robert Wise film, but the role didn’t catapult her to fame. She’s still a charmer, a dazzling beauty. The casting of the supporting players is not exemplary — none of the various viziers and villains are at all memorable. Neither of the two exotic women Hassan finds in his adventures are impactful either. One Queen of the Underworld (Gloria Milland) threatens Hassan with some burning ghost-men, who turn out to be Mario Bava- like phantoms. The three genies are personality-challenged, colorless and unfunny, even when one of them walks around without a head. Another is turned into a (really good) statue (just below)). They may have been inspired by the three fairy godmothers in Disney’s Sleeping Beauty of a couple of years before.

Beyond the story’s lack of originality or freshness, the final no vote for Margheriti is the fact that he fails to make us feel anything for the characters. We essentially watch the show admiring the two stars’ youthful looks and screen presence. Tab rides horses well, and is perfectly capable as an action hero-lite (although Kerwin Mathews is better on that score). Ms. Podestá projects a sweet disposition, even if the director does little with Jamila’s contrasting attitudes toward Hassan. She goes soft on him with little motivation, and her attempts to be coy (pretending to be asleep, etc.) don’t generate any greater affection.

Harming the movie for American audiences — or perhaps adding to its Camp value — is that the distinctively-voiced Tab Hunter has been dubbed! The film’s voices are the post-dubbers heard in most every European genre picture exported to English-speaking countries. They’re so generic that they give the pictures a dream-like quality. With Tab dubbed as well, there’s no hope of building word-of-mouth on his performance — his fans likely laughed out loud when they heard his replacement voice. Not helping are the kindergarten- level speeches in the script. Even with the relatively high production values, the dialogue is unforgivably cheesy. It’s clear that the post-dubbed actors are speaking English. This makes us wonder if there was an alternate Italian version, or if they just dubbed foreign languages over the English lip movements. Antonio Margheriti fans will be interested to know that his real name is used in the credits — it was often Anglicized as Anthony Dawson, even for Italian audiences.

Director Antonio Margheriti certainly showed that he could do cut-rate special effects on his earlier sci-fi pictures Space Men and Il pianeta degli uomini spenti, aka Assignment Outer Space and Battle of the Worlds. Margheriti’s direction is efficient but unexciting, and most of the effects are basic. The show does use traveling mattes quite a bit, for flying carpets and various magic tricks by the comic genies. These are barely acceptable. Margheriti does pull off some excellent out-of-body ghost image effects, simply by manipulating reflections in glass. At one point a transparent ‘astral projection’ Hassan stands by Jamila, and then kisses her. It can’t be a simple superimposition, because we see the camera zoom during the shot. The illusion remains rock solid, indicating a live trick on the stage.

For a big conclusion, the frustrated Alpha Male suitor invades when his demands aren’t met. A generic cavalry battle is staged on the sand, with a number of anonymous soldiers fighting. Hassan, the genies and the two main villains take to the sky on flying carpets, for kid-safe violence in which pots are thrown down from above, bopping combatants on the head. (ah yes, the old hypotenuse effect). Un-magical, but visually clean animation shows Hassan’s Golden Arrow returning to his hand after being fired, time after time. Something tells me that The Golden Arrow was purposely confected as a children’s film, to better slip through the censorship offices of foreign countries. Even the ultra- conservative Saudi Arabia and India might have allowed it, after snipping a kissing scene or two.

The Warner Archive Collection Blu-ray of The Golden Arrow is a fine encoding of this technically very clean feature. The Technirama image certainly looks sharp and stable. Not mentioned above is the symphonic score by Mario Nascimbene, which does not come off well at all. The romance cues remind me vaguely of a main theme from Sweet Bird of Youth. A noodling ‘funny’ tune backs the three genies, and the romance theme is thrown behind most everything else, not very artfully. Not that every Arabian adventure needs the input of Miklos Rozsa, but precious little magic is conveyed through what we hear — only Tab and Rossana’s bright faces help the fun kick in a bit.

One odd choice is the use of a passenger jet noise whenever a flying carpet takes off … not only is it not magical, it works against the earnest tone of the picture. I imagine audiences must have laughed.

A hyped trailer is the one extra — it shouts tag lines that promise way more than the show delivers: “1001 Adventures in a Land of Magic and Miracles!   Never Such Exciting Spectacle…Never Such Exotic Scenes!’

The images available to illustrate the review don’t begin to represent the excellence of the transfer.