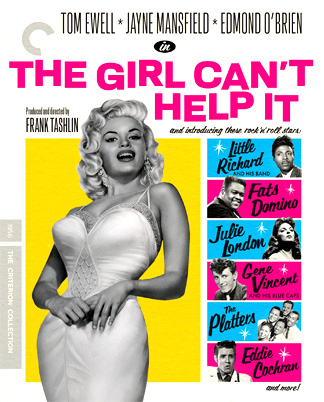 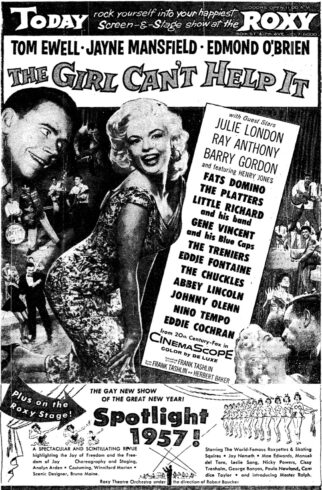 In 1957 it was commonplace for burlesque comedians to share the bill with a musical act or two, but in New York’s theater district one of those revues stood out from the rest—it opened on February 8th at The Roxy, a magnificent theater dubbed “The Cathedral of the Motion Picture.” But that cathedral had never held a service like Frank Tashlin’s The Girl Can’t Help It—for 98 minutes the congregation was cajoled, regaled, and set free by a parade of clownish mobsters, gyrating showgirls and hyperventilating rockers raising the roof in 4 track stereo—the only thing missing was 3D—and who needed that with Jayne Mansfield center screen and busting out all over. William Castle introduced the gimmicky Emergo for House on Haunted Hill in 1959 but surely 1957’s most famous platinum blonde got there first. 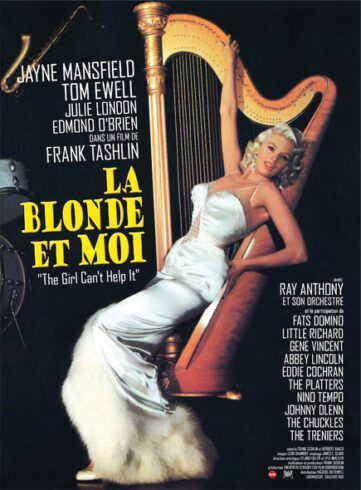 If Mansfield didn’t exist, Tashlin would have invented her anyway—the director made his name consorting with cartoonish figures like Daffy Duck and Jerry Lewis in spring-loaded farces like Scrap Happy Daffy and The Disorderly Orderly. And Mansfield was plenty cartoonish herself. Though Hollywood was swimming in pneumatic blondes like Mamie Van Doren and Diana Dors, it was Jayne who was branded as the inflated parody of Monroe—after plenty of hard work Mansfield had become a pop cultural signifier in her own right, and Tashlin must have salivated at the notion of casting her. Jean-Luc Godard was so impressed with the director’s unbridled id—the subtly titled Hollywood or Bust made Godard’s top ten list in ’57—that he coined a phrase to describe Tashlin’s ticklish world view: Tashlinesque. 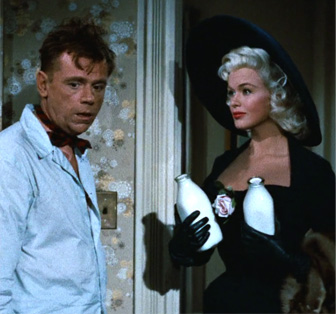 The veteran cartoonist, animator, and gag-writer reacted like any dull company man, rejecting the praise from the Cahiers crowd as “philosophical double-talk.” That may have been true; Tashlin might not have had a thought in his head but his libido was working overtime. His lowbrow instincts are in high gear during the first head-spinning, hip-shaking 20 minutes of The Girl Can’t Help It, ignited by Mansfield’s effortless command of the Roxy’s CinemaScope proscenium where she sparkles like an iridescent Christmas ornament. But it’s not Christmas Eve—it’s a summer morning in Manhattan and Little Richard is in the air: propelled by the great rocker’s siren wail, Jayne and her hips are blazing a trail through the city and any man who dares cross her path is left to flounder in her wake; eyeglasses shatter and simple milk deliveries turn X-rated as one bottle after another pops off in her presence. 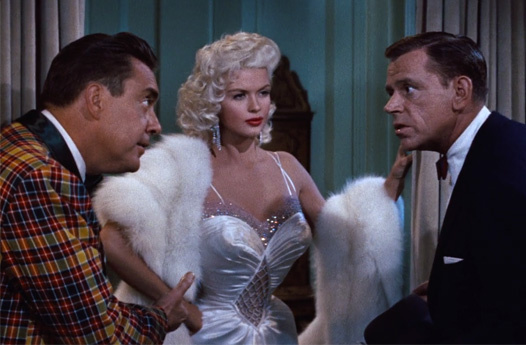 Mansfield is Georgiana Jordan, rechristened “Jerri” by her domineering boyfriend, Marty “Fats” Murdock (he was known as “Slim” till he discovered French Cuisine). A footloose and surprisingly funny Edmond O’Brien plays a slot machine fixer and a two-year prison stint has left the racketeer’s self esteem in tatters—to sooth his shattered ego he pushes Jerri toward a recording career, and to seal the deal he’s hired Tom Miller, a hard-drinking agent played by Tom Ewell. Except Georgiana wants nothing more than to settle down to the life of the standard-issue suburban housewife.

Tashlin’s impulse was to arouse both laughter and lust—usually at the same time. He was drawn to any girl or gag that might rile up both ticket buyers and censors, and to make sure there were no lulls in his latest production (loosely based on a Garson Kanin story about music-happy mobsters), he punctuates The Girl Can’t Help It with a succession of singers either on the cusp of stardom or at their zenith (there’s even a interlude with Julie London, supposedly Ewell’s ex-amour, who croons Cry Me a River in his love-struck fever dreams). In any other movie these sequences might interrupt the fun.

Instead those songs reflect the life essence of a generation, from adolescents to middle-aged romantics; Little Richard’s Ready Teddy, a horny cool-cat’s ode to sock hops, Fats Domino’s Blue Monday, a working man’s ode to Saturday night, and Eddie Cochran’s 20 Flight Rock, about a modern day Tantalus always too tired to “rock.” And there’s Abbey Lincoln, Mansfield’s stunning African-American doppelgänger, whose soulful performance turns the cartoonish proceedings on their head. Framed by a shimmering deep-blue curtain, the nightclub chanteuse recasts Spread The Word, Spread The Gospel as a quasi torch song—to add to the hall of mirrors atmosphere, Lincoln is wearing Monroe’s blood-red dress from Gentleman Prefer Blondes. 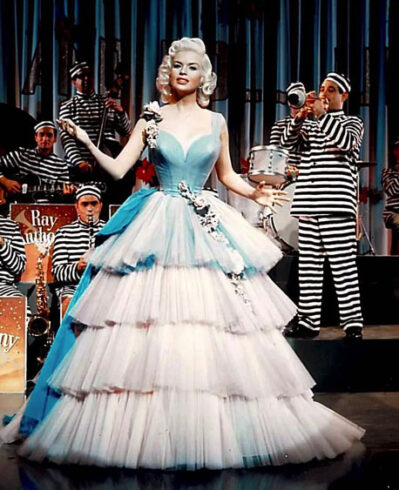 The Girl Can’t Help It and neither could Frank Tashlin; with his camera prying into every peak and valley of Mansfield’s glittering gowns, the film takes sexism to new highs—but thanks to the director’s screwball sensibilities, the chauvinism is so overblown it becomes a caricature, and a critique, of sexual politics in the Eisenhower era. Though the storyline flirts with subversive notions about gender roles—in particular Murdock’s attempt to cast Jerri in the role of breadwinner—Tashlin frames the finale in a way that Bishop Sheen would heartily approve; Jerri and Tom control the baby carriage while Murdock himself strikes it rich as the pop star. The Girl Can’t Help It manages to be both an oversexed rock ‘n’ roll movie and a tongue in cheek tribute to family values. It’s positively Tashlinesque. 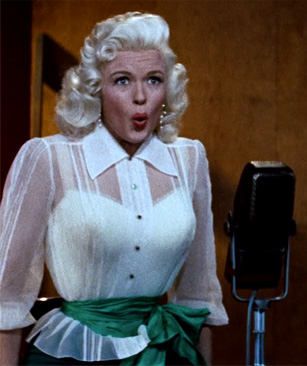 Along with the usual tranche of well-produced supplements, Criterion’s new Blu ray features an excellent reproduction of Leon Shamroy’s kaleidoscopic photography. A 20th Century Fox stalwart, Shamroy was one of the lighting geniuses of Hollywood, responsible for the look of intimate black and white dramas like A Tree Grows in Brooklyn, The Robe, the first film in CinemaScope, and the barren landscapes of Planet of the Apes. The majority of the other extras shine a light on Mansfield’s life and times.

A thousand and one drag queens are indebted to that platinum blonde bombshell so naturally Criterion has included an interview with an expert on the subject, the Pope of Trash, John Waters. He discusses the influence of Mansfield on his own (and his old pal Divine’s) work. It’s very wise in the ways of extreme cinema and it’s also a hoot. Also included is a Mansfield-centric episode of Karina Longworth’s podcast You Must Remember This, and critic David Cairns contributes an visual essay on The Grandeur of CinemaScope. Gaylord Fields weighs in on the film’s music and Eve Golden, the author of the Mansfield biography, Jayne Mansfield: The Girl Couldn’t Help It, offers an appreciation of the actresses’ career.

The package wraps up with behind the scenes footage of The Girl Can’t Help It and a contemporaneous interview with Jayne on the Tabloid tv show in 1957. There’s also a quick look at the ever excitable Little Richard on a The Merv Griffin Show from 1984—”shut up!” Included in the disc case is a print essay by New Yorker writer Rachel Syme that is both insightful, informative, and funny (particularly the tour of Jayne’s outlandish pink mansion). Along with Syme’s piece are excerpts from Frank Tashlin’s 1952 book, How to Create Cartoons with a new introduction by Ethan de Seife, author of Tashlinesque: The Hollywood Comedies of Frank Tashlin.