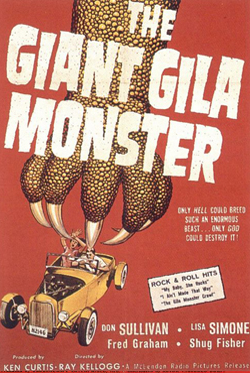 Not all 50s monster pix came from Hollywood–some were regionally produced on miniscule budgets, like this minor entry in the enlarged varmint sweepstakes, slavishly following the misunderstood teens vs.clueless adult authority formula pioneered at AIP. The monster blows up real good, though. GILA, Jim Wynorski’s 2012 remake of this public domain chestnut, debuts on video in April.