Director Robert Montgomery’s last feature is a war movie like no other, a study in leadership and command with no combat scenes. James Cagney uses none of his standard personality mannerisms; the result is something very affecting. And that music!  You’ll think the whole show is the memory of a soul in heaven. 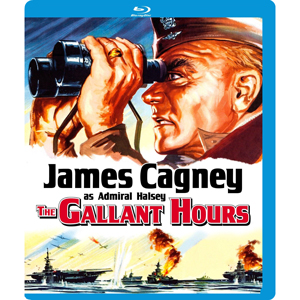 Actor Robert Montgomery branched out after his wartime Naval service, eventually finding satisfaction as a TV producer. But he also directed a half-dozen movies starting with the eccentric films noirs Lady in the Lake and Ride the Pink Horse. His final feature, a modestly budgeted war movie from United Artists, is also unusual, but in a different way. 1960’s The Gallant Hours is practically a minimalist work, as if Robert Bresson had decided to film Midway without on-screen battles. Instead, a perfectly cast James Cagney spends a full two hours in a narrow-focus drama about the war hero Admiral Bull Halsey. It’s a study of leadership and decision-making that could apply to anyone burdened with great responsibility. Robert Montgomery had served under Halsey during the war. He starred in and directed small parts of John Ford’s They Were Expendable, fifteen years before. He and James Cagney formed a company to make the movie.

Much like Cagney’s Yankee Doodle Dandy, The Gallant Hours begins in the ‘present’ and flashes back to cover a five-week period that turned the course of the war in the Pacific. When things get tough on Guadalcanal, William F. ‘Bull’ Halsey Jr. (Cagney) is sent in to take over the command of the entire battle plan. He brings along several experts and aides (Vaughn Taylor, Les Tremaine, Karl Swenson) plus his personal pilot (Dennis Weaver) and his doctor (Walter Sande). Rather than dismiss the former commander’s top officer, a good organizer (Ward Costello), Halsey breaks the man of the habit of following rules rather than doing whatever’s necessary to win.

Touring battle zones, Halsey wins respect by staying out of local commanders’ hair, dropping formalities and getting on with the job. Halsey has to explain to a frustrated flight commander (Richard Jaeckel) why he needs to stay on the job despite feeling he’s a failure because he loses pilots. Halsey out-thinks the opposition by gambling on the fact that the Japanese have so far failed to follow through after initial successful attacks. Back in Japan, Admiral Yamamoto (James T. Goto, also the film’s Japanese advisor) is doing the same thing. This battle of wits, with Halsey having to make his decisions based on iffy Navy intelligence, leads to his most crucial decision. To stop an armada of Japanese ships en route to reinforce the Phillipines, Halsey sends two inferior battle groups into action. It’s a veritable suicide mission.

The Gallant Hours doesn’t satisfy some fans of war movies. There is no on-screen action and the shots of vintage (and occasionally anachronistic) ships and planes are edited for clarity, not excitement. The emphasis is on how a leader remote from the action makes effective decisions. Bull Halsey’s staff may look like a boys’ club, with its jokes and the camaraderie, but it’s a tight organization. Halsey insists on the formalities of the command relationship but drops the rest of the pomp and circumstance. Rather than order people around he asks their advice. By dropping his insignia he gets the honest thoughts of the men who know what’s happening, such as the opinionated pilot (William Schallert) who tells him that the battle plan is all screwed up. The Navy leaders back at Pearl or in Washington need Halsey to make decisions that get results. A consummate poker player, Halsey intuits that the Japanese might be trying to score a win by shooting down his personal plane. He orders his intelligence boys to try to catch Yamamoto in the air. The Gallant Hours has no illusions that the killing in war is honorable. It’s Al Capone vs. Bugs Moran, and anything that disrupts the enemy is within the rules, even a mob hit.

Screenwriters Beirne Lay Jr. (Twelve O’Clock High) and Frank D. Gilroy (The Subject Was Roses) manage the service dialogue and relationships without overstatement. When Les Tremayne’s officer speaks out of turn he isn’t punished as a liability to Halsey’s command. Jokey Dennis Weaver chases women and kids his boss to some degree, but when he asks to be transferred to a combat unit, there’s no sentimental baloney about it.   Montgomery and his writers hold the movie together with two narrators, one to explain the U.S. side and one for the Japanese. The voiceovers offer exposition but also place the events in a reflective past. Background information tells us about the men we see, and sometimes their future fates. Although the feeling isn’t as poetic, this ‘voice of fate’ reminds us of Terrence Malick’s The Thin Red Line — it’s kind of spooky, without the irony and political comment of the voiceover in Roger Corman’s The St. Valentine’s Day Massacre.

Adding depth to the proceedings is a score track that consists of nothing but choral music arranged by Roger Wagner. Apparently chosen as a way of getting around a musician’s strike, the brooding chorus imposes a welcome strange vibe on everything. At first we think that Halsey and his men are being compared to Monks — they go about their business backgrounded by downbeat harmonies. But the infrequent military hymns place our thoughts in a reflective mode. This is the main distinguishing aspect of Montgomery’s movie, and I’ve heard more than one non-fan describe it as a major flaw. I wonder if the same fans reject the layer of reflective, abstract poetry imposed on The Thin Red Line?  The chorus focuses our attention on the film’s real subject:  the civilians-turned warriors that stood up when the country was at its weakest, and the commanders that did so well under terrible pressure. The movie spends much of its time watching Bull Halsey brood in isolation.

The absence of battle scenes gives the show the style of some Japanese films, like Kenji Mizoguchi’s 1941 The 47 Ronin. Adapted from a play, all the action in that classic story occurs off-screen. Thus The Gallant Hours neatly sidesteps the pitfall of making the war look attractive. We see Halsey and his staff getting on and off ships and planes, and riding in jeeps to tour a battlefront. Halsey must rely on second-hand information. Dennis Weaver’s pilot comes back from a mission, having shot down a number of Japanese planes. It’s been a turkey shoot. Even though he’s now an ace, he’s just doing his job and feels no glory in it. 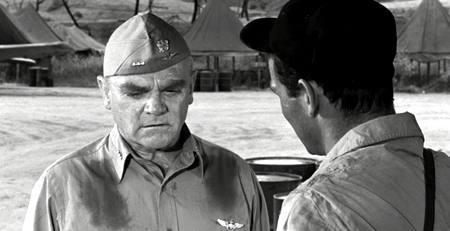 To me the most impressive scene is when Halsey pulls two battleship commanders into his office, Admiral Norm Scott (Sydney Smith) and Admiral Dan Callaghan (Nelson Leigh). He tells them to ‘go forth and engage’ an enemy that has an overwhelming advantage. The Japanese have to be stopped or it will be defeat for the entire Theater of War. The commanders already know what’s up, and receive the assignment as if Halsey were doing them a personal favor. They’re not fanatics with a death wish, but experienced officers well aware they weren’t put in charge of battleships to duck a fight.  Ever since they were cadets they’ve dreamed of what it would be like to be in command for a desperate battle… the George S. Patton sentiment.  Yet the meeting is unsentimental, a cordial ‘Godspeed’ moment. In their own way, the two commanders are as cool as western gunslingers.

Likewise The Gallant Hours goes for no big effects at its conclusion; it’s the anti- Yankee Doodle Dandy. Cagney plays everything straight, going for interior acting effects and leaving all of his personality tricks behind. He’s amazingly effective, I think. After this show he did Billy Wilder’s One, Two, Three, practically blowing a fuse to give the frantic performance that Wilder wanted. Then came a long retirement.

The Gallant Hours does one more interesting thing: it gives modest but meaty parts to a couple-dozen character actors that normally play faceless middle-aged authority figures — doctors, politicians, big businessmen, soldiers. Everybody gets a chance to shine even if they only have one or two lines of dialogue. We spend a minute or so meeting a flyer or a chaplain, after which the narrator tells about the man’s future. He may become a congressman after the war, or may be killed the next day. These are ‘familiar yet anonymous’ faces. Vaughn Taylor (Blue Denim) and Ward Costello (Terror from the Year 5,000) get to project deeper personalities than is usual. The interesting effect is that these ‘comfortable’ actors seem like family already, and make us feel closer to the generation that went out and did the fighting. 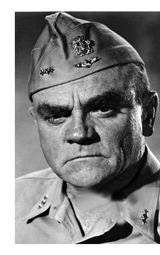 The KL Studio Classics Blu-ray of The Gallant Hours is a fine HD encoding of this weirdly serene war movie. The images are excellent throughout; the only element I can criticize is the choice of lenses in interiors, which make the good sets look like what they are rather than real locations. The exteriors, especially when actual ships are used, work better. The widescreen framing (1:66) helps to focus the action. Directors like John Frankenheimer would introduce more dynamic compositions to these kinds of movies.

The audio is free of distortion, which helps with all that a cappella choral music in the mix. Earlier releases and TV prints weren’t always so clear. A song by actor Ward Costello is heard as well; it’s a lonely chantey about a boy who goes to sea.

The disc carries English subtitles (way to go, Kino!). Trailers for The Gallant Hours and Run Silent, Run Deep precede the double-length trailer for Kino’s disc of On the Beach, which carries film footage from the show’s simultaneous international premiere engagements.

Like those earlier Robert Montgomery pictures  The Gallant Hours is an interesting experiment. For my taste it works very well. When all the fighting is over we remember things like the way water laps up against the side of a boat, and the Admiral’s discomfort when he must change back into civilian clothes. The ending follows through with the Warrior Monk theme. Halsey’s ritual retirement scene has a mild parallel with Audrey Hepburn’s harsh conversion back to the secular life at the end of Fred Zinnemann’s The Nun’s Story.