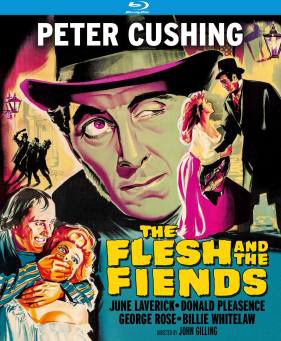 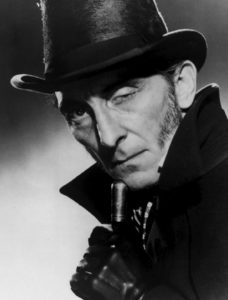 The Flesh and the Fiends lives up to its name and then some. The setting is Scotland but the squalid streets and charnel houses suggest Dickens’ London at its bleakest. Everything is for sale here, the fleshy whores of the cathouses and the fiends who haunt them. On the other side of the tracks lives Robert Knox, a respected anatomist at Edinburgh University who pays for his flesh too – the bodies necessary for his livelihood are in scarce supply and grave robbers William Burke and William Hare are ready to deliver.

Venerated by his students while castigated by old guard medicos, the forward-thinking Knox is a formidable presence at the podium with only one thing to mar his handsome profile, a blind eye. The result of childhood smallpox, it not only gives meaning to his choice of profession but comes in handy when he needs to ignore Burke and Hare’s cutthroat methods. Knox is ready to trade almost anything for their wares, including his soul – if only he believed in such a thing: “I can show you the heart… can you show me the soul?” Not only can he show you the heart, the complicated Knox has one and uses it to help one poor scholar with his tuition. That student, a shy young man named Chris Jackson, has even more pressing problems – he’s fallen in love with a working girl from the wrong side of town, the prostitute Mary Patterson. 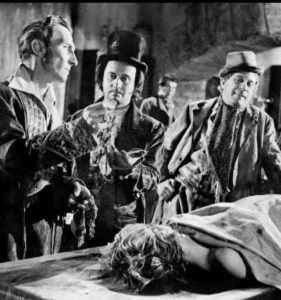 Hovering in the shadows are Burke and Hare, on the prowl for more fodder for the autopsy slab. A solitary shut-in and a sickly old woman are easy prey but when the two Resurrectionists expand their territory to Knox’s inner circle this expertly-made but standard issue horror film enters tragic territory. Written and directed by John Gilling, The Flesh and the Fiends may be a bone chilling ride past the graveyard but it reminds us how bracing that night air can be.

The film was produced by Robert Baker and Monty Berman, the British duo who reveled in exploitation items with a Victorian flair like Jack the Ripper where they tried to match Hammer Studio’s game of Bosoms and Blood but minus their luxurious color photography. Berman photographed Flesh as well but in the starkest black and white – it shares the same distinct visual flavor as the gothically-styled Jack the Ripper; stage-bound sets that resemble arcane illustrations for a macabre storybook. 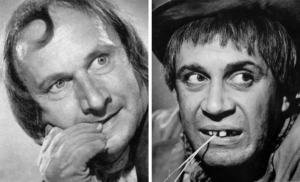 Gilling’s screenwriting and directorial command of the material is exceptional (it’s hard to reconcile this writer/director with the one who made The Mummy’s Shroud). The director turns Edinburgh’s streets into a convention of damned souls, accursed bottom feeders and upper-class monsters who are brought to life in a series of exemplary performances. Donald Pleasence is pitch-perfect as the pitiless Hare and George Rose is an astonishment as the horse-toothed simpleton Burke (he resembles Pinocchio’s pal Lampwick turning into a donkey). A comical-looking figure to be sure, his goonish behavior only enhances the horror of his black-comic entreaty to Hare who’s about to claim another victim – “Don’t make the place untidy, Willie!” 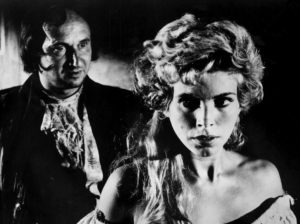 Peter Cushing gives one of his finest performances – away from Hammer’s blood and thunder theatrics he’s a steely, no-nonsense practitioner of his craft, a million miles from his warm-hearted yet excitable Van Helsing (but with some of the comparably icy Victor Frankenstein’s scientific obsessions). The beating heart of the film comes courtesy of Samuel Beckett’s favorite actress, Billie Whitelaw. She plays Mary who is by no means the Hooker with the Heart of Gold – she’s a self-centered, squalling child. But Whitelaw reveals the little-girl-lost without overplaying the pathos – it’s an unsentimental portrait of a woman who has nowhere to go but down. Her fate is the ghastly centerpiece of the film, the shock that provokes both justice for the dead and redemption for Knox. 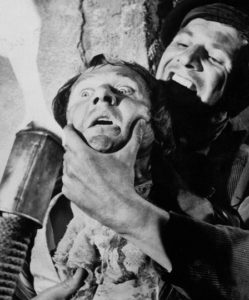 Kino Lorber has brought Gilling’s superb film to Blu ray in two versions, the unexpurgated “continental” version with its fulsome whorehouse nudity and the cut U.S. release under the title,  The Fiendish Ghouls (it was also released as Mania). Ghouls not only does away with the bare flesh but the crucial final ten minutes of the film. The print for both versions is problematic with a predominantly soft image, excessive grain and occasional print damage. Kino’s transfer makes the best of a bad situation but it’s a real disappointment. It’s not hyperbole to say that the film is so powerful it makes little difference to one’s viewing pleasure (if pleasure is a word to be used for such a grueling experience).

Speaking of that experience, Tim Lucas talks about his own fraught history with the movie in his very fine audio commentary included on the disc. Along with a cornucopia of production information and astute critical observations, Tim discusses his first viewing of the film at the age of 12 on that hallowed Midwest institution, Bob Shreve’s Schoenling All Night Theater in Cincinnati. His first exposure to The Flesh and the Fiends (with, remarkably, all the film’s violence left intact) literally made him sick. Kino has not included vomit bags so viewers are forewarned. The package wraps up with a selection of trailers including Cushing’s rip-roaring turn in The Hound of the Baskervilles.

Here’s Joe Dante on The Flesh and the Fiends (in its Fiendish Ghouls incarnation):