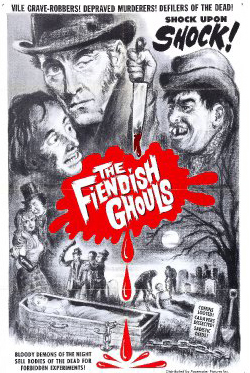 The truncated third US release (after earlier tries as “Mania'”, then “The Psycho Killers'”) of John Gilling’s 1960 retelling of the Burke and Hare story that formed the basis for Robert Louis Stevenson’s “The Body Snatcher”. Cut by a reel and a half and aimed at the lowest of brows, this version ends with Donald Pleasence getting a torch in his face.