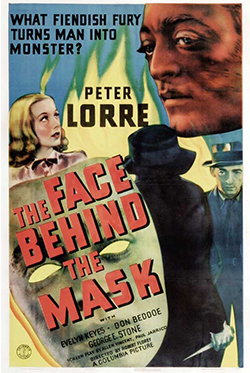 The Face Behind the Mask

Robert Florey’s melancholy melodrama stars Peter Lorre as Janos Szabo, a Hungarian immigrant whose luck goes from bad to worse—scarred  in a fire, he’s unable to find work and turns to crime. The film teeters on the edge of tragedy but Szabo eventually finds redemption in the love of a blind woman played by Evelyn Keyes. As was Lorre’s wont, he scares you and breaks your heart, sometimes at the same moment.