And now for something we had read about but never before saw: Tod Slaughter’s highly entertaining murder thriller is stylized in a vintage theatrical format, the Victorian blood & thunder barnstorming drama, originally from 1880 or thereabouts. Slaughter’s refined gentleman is also a crazed killer with a bizarre modus operandi. Everything that happens is borderline preposterous, and all the better for it. It’s not exactly a horror picture — unadventurous fans may just see a creaky 80-year old movie — but Tod Slaughter is one of a kind. Kino’s new Blu-ray is a beautiful restoration with an informative and entertaining audio commentary. Pretty much an unknown entity in the United States, Tod Slaughter was a household name in England, occupying his own special place in theatrical history. The actor ran his own theatrical company through much of the 1920s, featuring what were called ‘blood & thunder’ horror plays. He didn’t initially specialize in villains. Tod was the young hero in the first run of the play The Face at the Window. By the time of the filmic horror revival in 1931, Slaughter was a celebrated London star in old-fashioned melodramas, typically playing a fiendish central character that hides his villainy under courtly manners. Some should find him a big discovery — he’s a terrific performer.

Our connection to Victorian melodrama today is probably the Broadway and film adaptations of Sweeney Todd, the Demon Barber of Fleet Street. The property began in 1847 as a serialized ‘penny dreadful’ novel and became a stage play around 1875. Stephen Sondheim’s musical gave the character depth and soul, but the whole point of the original is the outrageously vulgar idea of a fiendish barber whose murdered clients are made into meat pies. It sounds like a great subject for a evening of Grand Guignol in Paris, with added gory stage effects… and meat pie vendors in the theater aisles? 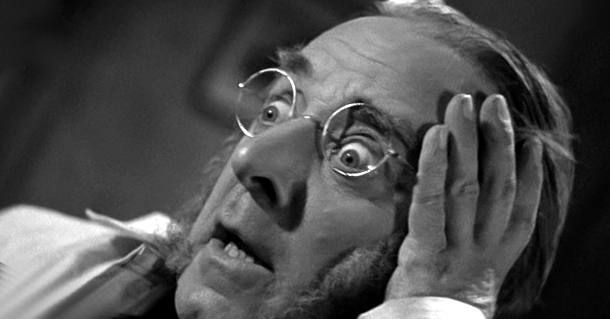 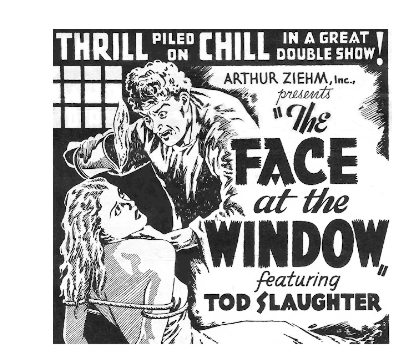 It’s an interesting coincidence that the impresario’s birth name really was ‘Slaughter.’ Did ‘Norman Carter Slaughter’ change his first name to Tod because it was similar to the word ‘Tot’ in German?  One charm of the Victorian blood & thunder plays is the villain’s complete lack of ambiguity or psychological depth — he’s just a blaggard through and through. As in The Drunkard or Uncle Tom’s Cabin the stage presentations identified the good and bad characters right up front. The fun is watching Slaughter’s villain hatch his evil plan, relishing hint-laden dialogue that goes over the heads of the polite & virtuous characters sharing the stage. When unmasked, a Tod Slaughter villain typically waxes insane but eloquent, laughing at his foes like a mad doctor in a horror film. We’re told that Slaughter’s powerful performances created a strong word-of-mouth, popularizing his theater with the fancy-dress carriage trade.

The showman’s reputation grew famous with roles like the evil Squire in The Murder in the Red Barn, who murders a pregnant girl. In The Crimes of Stephen Hawke his meek moneylender is also a killer by night, the ‘Spine-Breaker.’ Come 1935, producer George King showcased Slaughter in a film series of his greatest hits, starting with Red Barn. King began directing them as well. It was lucky that the dastardly villains Slaughter played could be any age. When he entered the movie biz, he was already fifty-five.

Slaughter’s ninth film The Face at the Window (1939) is thought to be one of his best, at least in the opinion of the expert on this disc’s commentary. The movie is a reasonably well- produced independent — I don’t know whether it would be classified as a ‘quota quickie.’ The blood & thunder storytelling style is not immediately apparent. We expect more of a spoof element, or perhaps to see the villain ‘Chevalier Lucio del Gardo’ (Slaughter) shoot sly asides to the audience. No, most everything is played arrow-straight, even some of the sillier coincidences and an unlikely sci-fi element. Although Tod Slaughter’s Chevalier is a pompous knave, he’s no clown. 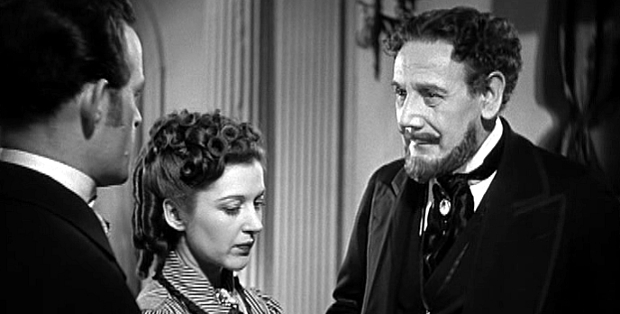 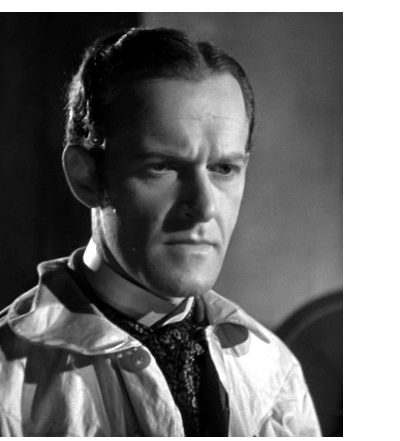 The storyline is not much more complicated than an episode of Dudley Do-Right. A robbery and murder at The Banc Brisson is connected to a series of ‘Wolf’ murders, in which the only surviving witnesses report seeing a horrid monster man ‘at the window.’ Honest bank clerk Lucien Cortier ( ← John Warwick, Pool of London, The Lavender Hill Mob, Horrors of the Black Museum) loves Cecile (Marjorie Taylor), the lovely daughter of his employer, Monsieur Brisson (Aubrey Mallalieu), and wonders how he can convince the stuffy old coot to accept him as a son-in-law. But the older, wealthy and celebrated Chevalier Lucio del Gardo wants Cecile as well. He gets Brisson on his side by promising to bail out the ailing bank. When Cecile rebuffs his advances, the Chevalier hires two thugs to frame Lucien for the robbery. Dismissed without a reference, Lucien determines to clear his name and find the real villain.

The story has more wrinkles but the more important aspect is the way it is told — there’s a charm to the dialogue, through which the characters bluntly state their attitudes and biases. The Chevalier cozens his way into the banker’s business with manners so oily, any sane man would distrust him from the get-go. The Chevalier also uses his local celebrity to impose himself on the lazy Inspector Gouffert (Robert Adair), redirecting the police investigation in his favor. The innocent romantic couple are slow to suspect foul play until Lucien goes undercover to unmask the villain. The use of disguises appears to have been a recurring motif in Victorian blood & thunder plays.

The play’s idea of a criminal underworld is The Blind Rat, a shady but atmospheric bar (brothel?) where the Chevalier hires crooks, stashes kidnap victims (guess who?) and conspires with the equally villainous Madam in charge, ‘La Pinan’ (Margaret Yarde). How can the Chevalier maintain his noble facade, when he spends all of his time carousing with these lowlifes?  In Victorian melodrama the villains never have difficulty maintaining a secret second identity.

In the wholly preposterous chain of events, the Chevalier uses his police information to commit two more murders. Clues volunteered by the somewhat dim-witted Cecile end up aiding him as well. Those killings are also pitched to frame Lucien. As an extra fillip, the fugitive avenger Lucien is friends with one Professor LeBlanc, who claims to have an electrical process that revives recently deceased people just long enough to… uh, don’t ask. The fun is anticipating the Chevalier’s third act comeuppance, which arrives with a flood of impressive hammy acting. The police are foolish ninnies and the comic relief (a cook and her boyfriend) par for the course. The hero stays steadfast and optimistic while the heroine wrings her hands and continues to play into the villain’s clutches. Do you think the Chevalier might be responsible for the killings?  And who is that ghastly face at the window, filthy and drooling, with a clutch of snaggleteeth hanging over his lips?

Yes, The Face at the Window is five steps backwards in the tradition of horror, but that’s the charm. Perhaps one needs to be curious about theater history in the same way that Peter Yates’ The Dresser gives us insights into a mid-range touring theatrical company, led by an overbearing, emotional wreck of a name star. This is my first exposure to Tod Slaughter, a fine actor working a specific groove of escapist entertainment, for a different audience in a different era. His is not some mustache-twirling pantomime, although critics often use the word ‘pantomime’ to describe his style. If you think about what Tod is doing, it’s not really hammy, but perfectly gauged to the level of melodramatic menace required.

The biggest surprise on view with the KL Studio Classics Blu-ray of The Face at the Window is its quality. We’re only now getting accustomed to seeing prime transfers of British classics. Less stellar movies like this one have mostly been ratty eyesores in Public Domain bins, or perhaps in marginally better quality from a provider like Sinister Cinema. Well, ‘Euro London Films’ has a prime film element in nearly perfect shape, which allows us to appreciate Face at full value. Although most of the direction is conventional, George King’s cameraman lights everything attractively, especially the atmospheric den of thieves and the later scenes in sets representing the London night world. (A hint — in this thriller subgenre, any place chosen for a dramatic showdown will invariably include a window overhanging the Thames, to enable a timely escape.)

Director King manages some fast cutting between faces for ‘The Big Reveal’ but mostly just assures that the performances are well-observed. The ‘face in the window’ scenes (shots, actually) make an impact simply because the ugly-mug on view is such a contrast with the relatively civilized action elsewhere. Even the Chevalier’s henchmen are dependable, obedient little cutthroats. 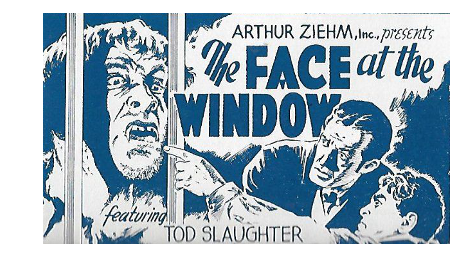 The audio is as clear as a bell. The English subs are barely needed considering that most lines are spoken with a theatrical flair and clarity.

Some trailers are attached; the welcome extra is an expert commentary by Jean-Claude Michel, read by Kino’s Bret Wood. A transcript of the track would comprise a not-bad biography and film treatise on the once-forgotten Tod Slaughter. As the Hardy Encyclopdia of Horror explains, don’t expect The Face at the Window to be a horror film per se. Phil Hardy’s reviewer describes Tod Slaughter as an extraordinary performer…

“…totally stylized in word and gesture, who nevertheless manages to transmit an authentic shudder of sadism along with the amusement simply by taking the audience into his confidence, assured that they will share his pleasure as he gleefully contemplates his crimes.”