Will somebody explain the sheep and the bear? Luis Buñuel really knows how to disturb people. This, his most characteristic surreal drama proposes an impossible, irrational situation – which isn’t all that different from the reality we know. Petty social rules, jealousies and bitterness make life hell for group of dinner guests stuck with each other, caught in an existential trap. 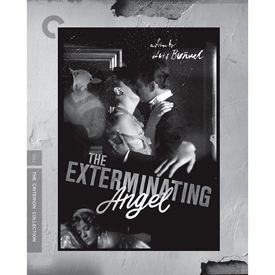 That intransigent rebel imp Luis Buñuel never mellowed — after ten or so films in Mexico serving commercial producers, he took the opportunity to scandalize Spain as never before with the gleefully blasphemous Viridiana. Independent producer Gustavo Alatriste freed him to concoct his own story, no questions asked. Surely noting the art house success of a French film about wealthy socialites, with a wholly irrational story, Buñuel felt encouraged to embark on a return to his surreal roots, attacking the bourgeoisie as he had in his early experimental pictures Un chien Andalou and L’Age D’or. 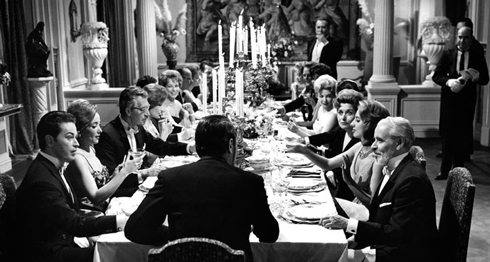 The viciously absurd satire The Exterminating Angel (El Ángel Exterminador) takes a dozen or so Mexican socialites into an existential hell that defies normal comprehension. Attending a ritzy post-opera dinner late one night, they discover that, even though nothing bars their exit, they cannot leave to go home. Some make excuses, others avoid the issue at first… as they do any embarrassing social problem. They instead pretend everything will be okay and spend the night. They run out of food and must break a pipe to get water. An engaged couple hides in a closet to be alone. Various socially unacceptable rifts form, as some guests accuse others of being to blame. The situation is maddening. Everyone wants the problem to go away, but there is little cooperation in the search for a solution. One man purposely throws away some pills he knows another guest badly needs. A guest dies and others are driven close to madness. Two commit suicide. A woman hallucinates an attack by a severed hand. They eventually nab a few of the sheep that are wandering through the mansion (don’t ask) and butcher and eat them right on the floor. Voodoo hocus pocus does nothing. Just as one prisoner convinces the others to kill the host, one of the ladies (Sylvia Pinal, the star of Viridiana and the producer’s wife) proposes a strangely logical solution. Will they escape?

In The Exterminating Angel Luis Buñuel finally gets to fully express his surreal instincts. Even Viridiana has a coherent storyline, as everything in it could indeed happen. The premise of this movie purposely makes no sense, and its details confound the audience. Art film lovers are really no different when it comes to expecting pat solutions to every fantastic mystery. The director throws in absurd repetitions of action and dialogue guaranteed to disorient the casual viewer. His characters greet each other more than once, and we wonder if he’s making a statement about the petty meaninglessness of social relations among the upper class. Even before trouble breaks out the guests reveal that ugly ideas and antisocial compulsions lurk beneath their good manners. They laugh off inconveniences and make polite excuses for the problems with the meal because it is fashionable to do so. But one woman takes the opportunity to throw an ashtray through a window, for no reason. Another man makes a joke about a Jew being responsible. 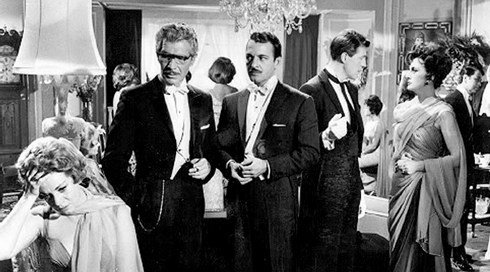 The inexplicable imprisonment does away with the superficial social fabric of the wealthy, revealing bitterness and dissatisfaction beneath. Good friends hurl insults and accusations at one another, and a spoiled son lashes out at the terrible inconvenience he’s suffering. When various people become ill, the doctor says to expect the worst, they might go bald. The women make evasive small talk about religion. One opens her purse to reveal it full of feathers and a pair of chicken’s feet. Two guests appear to have some kind of illegal scheme going on. That’s not explained and neither is a box the host eventually produces, that contains heroin and cocaine. His wife never gets a chance to sneak upstairs with her lover.

As the group descends into savagery, we have absolutely no idea what will happen. Occasional cuts to the street outside show the authorities equally helpless to do anything, despite there being no rational reason why they can’t simply enter the house and bring the ‘prisoners’ out. Citizens demanding action are hustled away for disturbing the peace, while the military man in charge just avoids the subject, as if doing something is a very, very bad idea. It isn’t just the stiffs in their evening gowns and tuxedos that are affected — all of the servants are compelled to leave, without giving reasons for deserting their posts. Only the steward (Buñuel regular Claudio Brook) stays and tries to help, but he’s as helpless as his employer, a fair-minded man who must defend himself against the irrational accusations of his own guests. As with many of the director’s films, the finale uses images suggesting that a revolution is underway.

When shown The Exterminating Angel in college, we were told to keep our eyes peeled for strange cinematic game playing. The sheep and a bear run through the house, while the human guests remain trapped in an upstairs salon. Some of the screwy repetitions, including a full toast, slipped past me. Many of the non-sequitur dialogues come from so far out in left field that they barely register. A lady guest goes to the ‘water closet’ and reports that when she lifted the lid, she saw clouds and an eagle flying as if the mansion were high in the air. The crawling, murderous hand connects The Exterminating Angel with, of all things, Robert Florey’s The Beast with Five Fingers which Buñuel reportedly helped write and develop while at Warners in 1945. Even more obscure is a brief dream sequence. Someone calls out that the Pope is high atop a snowy mountain; a hacksaw takes the place of a violin bow and cuts through a cello and then a human hand… motivating the appearance of the disembodied hand, perhaps? 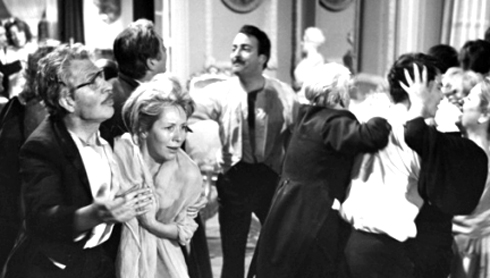 The Exterminating Angel is still considered Buñuel’s key work, an uncompromised statement of his anarchic world view. When asked to explain or comment on his movies, the director could be counted on to offer an obscure or insulting response. Interestingly, Mexicans rarely took direct offense because, even though this film is set on Calle Providencia in Mexico City, the high society it describes is very un-Mexican. A cultured Army general who attends the opera and quotes great literature? Not in Mexico of 1961, say the experts. Don Luis’s champions howled at patrons who wanted explanations — ‘Why the bear?’ Never defensive, Buñuel simply said that he sawed a cello in half because he was upset that Pablo Casals had played at the White House. The Spanish-speaking film world understood: film art was Buñuel’s way of tossing intellectual hand grenades at Franco’s Spain.

The dictator Franco rarely acknowledge these barbs, but he did report once that he had finally seen Viridiana and thought that it was no big deal. Luis Buñuel simply responded that it is indeed very difficult to shock a man who has committed so many atrocities. Buñuel had been a close personal friend of the poet Federico García Lorca, who over twenty years before had been brutally murdered by Franco’s police, aided by ‘volunteers’ — a fascist mob. Buñuel’s elegantly savage movies expressed a bottomless political rage. 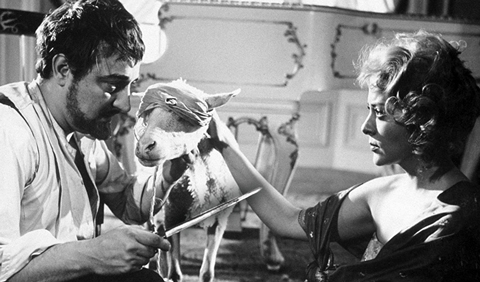 The Criterion Collection’s Blu-ray of The Exterminating Angel is a good encoding of a great picture, that isn’t as perfect as most of their discs. The usual painstaking scan and clean-up has resulted in a pleasing image, yet it is from dupe neg materials that are softer than one would expect — not out of focus, just not as sharp nor with a full contrast range. The liner notes report that the film’s flat aspect ratio is the original. That doesn’t seem right, as the show looks like any other Mexican film after 1957 or so, with an image balanced for a widescreen matte slightly higher than center. The main titles, which look like Mexican originals, are registered in a horizontal band (1:66?) a little higher than center as well. The bottom of the image is generally empty. Criterion’s own disc of Viridiana, from the same producer, is formatted 1:66. The movie of course still plays beautifully, but I have to think that the insistence on a flat transfer must originate at the source.

The audio has been cleaned up, but is still rough in spots. More than one scene has surface noise, as if the only source were a less than perfect optical track.

The main extra is a full-length 2008 feature documentary in which Buñuel’s son Juan Luis and the director’s longtime writer-collaborator Jean-Claude Carriere go over the master’s full life and career, traveling to locations in Spain, Mexico, the U.S. and France. We see the little theater in Paris where Un Chien Andalou premiered, and all but started a riot. When we visit the little house where Buñuel lived in Los Angeles, no address is given. But a reverse shot shows a new High School on Van Ness Street Hollywood, telling me that the house is less than a mile from Savant Central. Don Luis’s little frame house is a 1920s bungalow style, a smaller but similar version of my own.

Slightly older interviews give us actress Silvia Pinal, celebrating the director’s memory. Director Arturo Ripstein recalls meeting Luis Buñuel at an early age and sitting in on his set as he filmed. Buñuel was not a reserved artist on the set but an energetic taskmaster.

The original trailer is so enigmatic and intriguing, it could have been fashioned by the director himself. Criterion’s fat 36-page insert booklet has an engaging essay by Marsha Kinder and an interview with Buñuel from the 1970s, during a happy last burst of filming activity when he was all but deaf. One dazzling night when I was an usher at Grauman’s Chinese Theater, Buñuel was in attendance for the FILMEX premiere of The Discreet Charm of the Bourgeoisie. He received a thunderous welcome of applause in the packed auditorium. All could see him clearly waving from the old Cathay Lounge Balcony; he looked very happy.