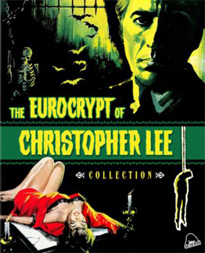 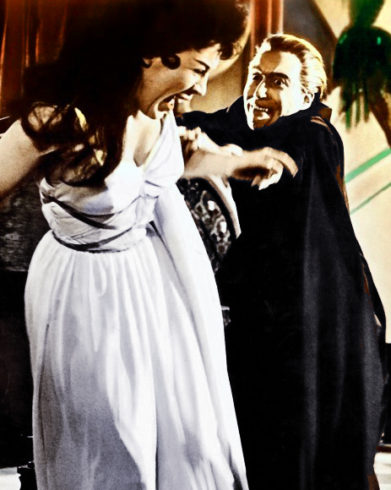 While Hammer Studios depended on bosoms and blood to rejuvenate a listless horror industry, their new contract player had some high octane ideas of his own. His name was Christopher Lee and though the hulking actor towered above the crew and co-stars, he proved shockingly agile as the newborn creature in 1957’s The Curse of Frankenstein. No matter how hospitable or well-tailored, his Dracula was a clear and present danger—fleet of foot and supernaturally strong. And in 1959’s The Mummy, he turned the slow-moving immortal into an Olympian killing machine, outpacing his victims like an undead Usain Bolt.

Making the scene just as the sixties were racing into view, Lee’s express lane monsters ignored musty gothic stereotypes to reflect an era in overdrive. Moviegoers lined up for more and the actor responded with a rumba line of otherworldly rogues including the scholarly satanist in City of the Dead and a double-dealing warlock in Hercules in the Haunted World—in short time he had qualified as a renaissance villain on the scale of Karloff and Price. 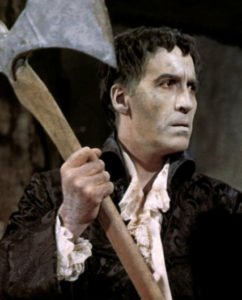 The Eurocrypt of Christopher Lee, a new Blu ray release from Severin Films, concentrates on that busy moment in the actor’s life, rounding up five films made in Italy and Germany between 1962 and 1967 with a brief detour to the small screen in 1971. There’s nothing here as revolutionary as the work he did for Hammer—even though one of that studio’s most storied directors makes an appearance. A few of these films cast Lee as a shadowy, rarely seen figure who nevertheless dominates the movie, like Welles in The Third Man or Brando in The Godfather. And even if Lee is occasionally missing in action, Severin manages to paint a vivid portrait of the artist in question; the set falls in line with their comprehensive tributes to filmmakers Al Adamson and Andy Milligan—beautifully wrought prints, a wealth of ephemera, and a distinctively decorated cover  (a garishly green Lee hovering over a rosy pin up babe). Carrying nine discs, the box itself is formidable enough for a footrest—unfortunately it opens with a whimper rather than a bang; Terence Fisher’s 1962 pastiche, Sherlock Holmes and the Deadly Necklace, a bottle of Sominex masquerading as a movie. 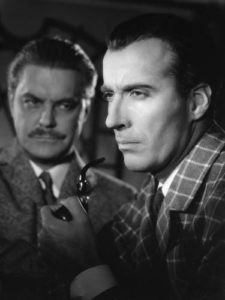 The script was written by Curt Siodmak and produced in Germany with an able assist from homegrown veterans including the wonderfully named Richard Angst, a cinematographer capable of both brilliant color (Fritz Lang’s dazzling Der Tiger von Eschnapur) and uncompromising black and white (Edwin Zbonek’s memorably lurid potboiler, The Mad Executioners). Fisher’s film, and Severin’s transfer, looks gorgeous but Siodmak’s story never gets into gear, moseying through a flat-footed tale about the criminal genius Moriarty and his lust for Egyptian jewelry. Lee appears ready for whatever game is afoot—his resemblance to Sidney Paget’s original drawings is Rathbone-worthy. And though the actor was famously unhappy with the film, he seems downright cheerful on camera, perhaps because Germany was a second home for him during this period (he traveled to Hamburg to play the hero in 1962’s Secret of the Red Orchid). 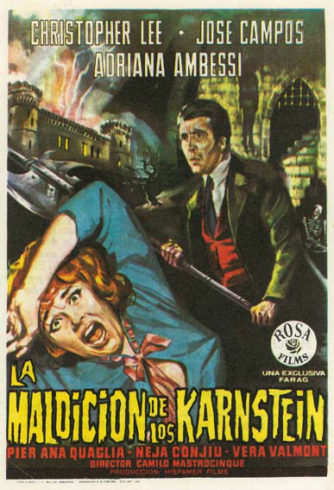 Once upon a time there must have been a contractual edict ensuring all Euro-horrors include at least one reference to Mario Bava’s Black Sunday. Crypt of the Vampire, Castle of the Living Dead and The Torture Chamber of Dr. Sadism all sign on the dotted line—these are assembly line gothics, built from spare parts of Bava’s influential classic; iron maidens, misshapen wastrels, and raven-haired seductresses more interested in your jugular than your libido. Both Crypt and Castle unreel in luscious monochrome while Dr. Sadism blooms with color reminiscent of Bava’s romantic horrors like The Whip and the Body or Blood and Black Lace.

Perhaps better known as Terror in the Crypt, 1964’s Crypt of the Vampire was directed by Camillo Mastrocinque, a dedicated journeyman who churned out films starring everyone from Toto to Barbara Steele. Though a hodgepodge, Ernesto Gastaldi’s story neatly holds together through its 85 minutes—it swipes from Black Sunday, naturally, but also Edgar Ulmer’s Daughter of Dr. Jekyll; our heroine, played by Adriana Ambesi, is convinced she’s a sleepwalking bloodsucker. Lee is Count Karnstein, the father of the earthy Ambesi who is almost a caricature of the Italian sex goddess—she resembles a Will Elder drawing of Anna Magnani. Gastaldi based his script on Carmilla which allows Ambesi to make cow eyes at mystery woman Ursula Davis while cinematographer Julio Ortas sets a late night mood for their flirtations. The ladies and the photography are compelling eye candy though Lee spends much of his time on the sidelines—the real suspense swirls around his daughter and her gal-pal; will they or won’t they? 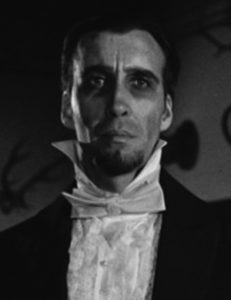 Filmed in 1963 but not released till ’64, Castle of the Living Dead was the first film of Warren Kiefer, a Jersey boy who turned the tables on Italian directors hiding behind Americanized aliases by assuming his own Italo-moniker, “Lorenzo Sabatini.” Lee stars as Count Drago, an amateur embalmer inspired by the ghoulish statuaries displayed in House of Wax and Mill of the Stone Women. Gaia Germani and Philippe Leroy are members of a tiny circus troupe who accept the count’s invitation for a special performance at his fortress and wind up as candidates for his corpse-filled museum.

Though thinly plotted, the film has its fascinations, particularly a grimly authentic mise en scène that suggests the influence of the movie’s second-unit director, the talented and tormented Michael Reeves. Reeves, who was to prove so adept at 19th century squalor in films like The She Beast and Witchfinder General, manages an atmosphere that recalls a Bergman morality tale and, in its more risible moments, Monty Python and the Holy Grail. Donald Sutherland plays three separate roles with utter sincerity (nobody goofed around with the irascible Reeves looking on): an ambitious police sergeant, a cantankerous old man, and a windswept witch right off the cover of EC comic’s The Haunt of Fear. Severin’s transfers of Crypt and Castle are very fine, but it’s Dr. Sadism that is the EuroCrypt‘s centerpiece, not just for the quality of its image but its capacity for unbridled fun. 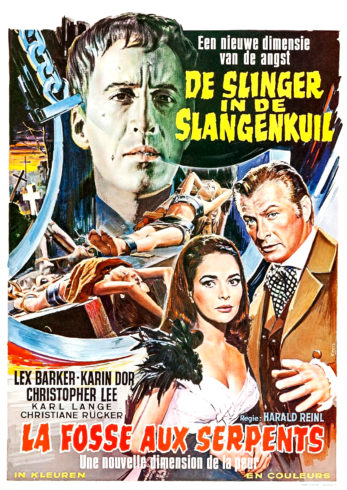 Despite its Andy Milliganesque title, The Torture Chamber of Dr. Sadism is a delight, a preposterous romp which happily picks the pockets of Black Sunday, Roger Corman’s Pit and the Pendulum and even Dracula, Prince of Darkness, whose fun-loving monk, played by Andrew Keir, gets his own “homage” in the person of Vladimir Medar’s boisterous priest (spoiler alert, he’s no priest—though Medar did wind up as one in Norman Jewison’s Fiddler on the Roof ).

Lee plays Count Regula, a sadistic aristocrat put to death by the ancestors of Lex Barker—scintillating as a chest of drawers—and ravishing Karin Dor, scintillating from top to bottom. Wearing a make-up that gives him that fresh from the grave appeal, Lee has returned to the living and is ready to play—and what a playground, a torture chamber tricked up with blood-stained racks, snake pits, and a blade the size of a Buick aimed at our hero’s chest. Other gruesome attractions include a spike-lined visor modeled on Barbara Steele’s Black Sunday mask and Lee’s undead assistant played by Carl Lange (who haunted a few Krimis himself including the memorable titles Face of the Frog and The Carpet of Horror). Harald Reinl directs with tongue firmly in cheek and the photography by Ernst W. Kalinke is delicately lovely—even in the darkest depths of Dr. Sadism’s chamber—Severin’s transfer is equally superb. 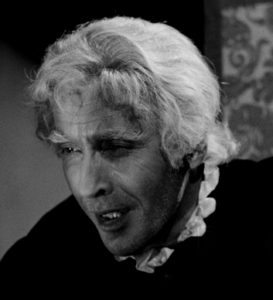 Challenge the Devil is a mess but thanks to Severin’s presentation of Angelo Baistrocchi’s glistening black and white photography, it’s a beautiful mess. And to show he means business, director Guiseppe Vegezzi’s movie flies off the rails in its opening minutes; set inside a cramped dance hall, it’s an alternately frenzied and static sequence featuring painfully sluggish strippers, Barbie Doll pop singers and incoherent dialog better fit for Bedlam. Prepare for whiplash because Vegezzi then cuts to a flashback of some Italian-style hot-rodders tearing up the road—and other drivers—before escaping to an abandoned castle. The anarchy of privileged hipsters—in front of and behind the camera—suggests a prelude to the chaos of Godard’s Weekend, but wait, here comes Lee playing a white-haired aristo who may be the devil himself.

Caveat Emptor: Challenge the Devil also holds the real secret of the EuroCrypt—the box info touts a ninth disc but there are only eight cases—che cosa? That disc, Relics from the Crypt, is actually tucked away inside the same slipcase as the Vegezzi film. It’s a deep dive into the vault with a real treasure at the end of the tunnel, a Swiss documentary from 1964 titled Horror!!! The sixteen minute production goes behind the scenes not only with Lee but Vincent Price, Nicolas Roeg, and Corman on the set of The Masque of the Red Death. Other Relics include Lee expounding on Boris Karloff, outtakes from To the Devil, a Daughter, a documentary about the making of Crypt of the Vampire titled The Crypt Keepers and O Sole Mio, a music video with Lee making like Pavarotti. 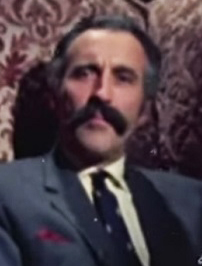 Last, and definitely least, Severin has put 24 episodes of 1971’s Theatre Macabre on two separate discs. The episodes—rather soft and with light film damage—are around 25 minutes in length, many of them based on classic tales of the supernatural by Tolstoy, Gogol, and Poe whose work has found far better interpreters in Kurosawa, Bava, and Corman. Sporting the bushiest of mustaches, Lee is on hand for the introductions which give him a chance show off his acerbic wit—though his writers forgot to give him anything funny to say.

Severin has built a mighty big EuroCrypt, one could get happily lost in its catacombs for days—a good part of that time could be spent with the Jonathan Rigby book on Lee included in the set, compact in size but mighty in accomplishment. Here’s a link to the seemingly endless extras—documentaries, commentaries, interviews—everything a Christopher Lee—or Euro-fan—could want. Bravo Severin, a brilliant job.