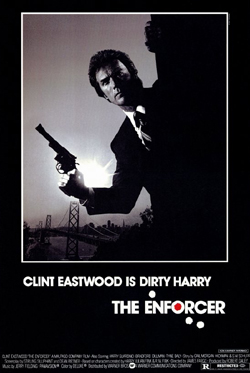 Although Clint Eastwood had intended to direct the third Dirty Harry movie himself, his replacement of Philip Kaufman during The Outlaw Josey Wales prevented him from taking the reins on The Enforcer, so his assistant director James Fargo was drafted to do the job. Tyne Daley’s tough female cop foreshadows her role in the hit Cagney and Lacey tv series. The music is by Jerry Fielding, making this the only Dirty Harry film without a score by Lalo Schifrin. By the way, the line “Go ahead, make my day” does not actually appear until the next film in the series, Sudden Impact.