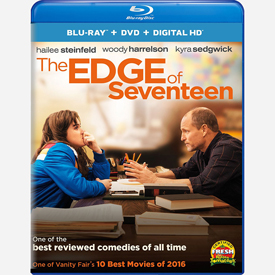 Teen comedies can be annoying, but every year seems to bring a good one. What work nicely are thoughtful movies that acknowledge the modern problems of teens in such a highly sexualized world, and place the sexual aspects in a non-exploitative context. I have been entertained and moved by Reese Witherspoon and Matthew Broderick in Election, Ellen Page in Juno and Thomas Mann and Olivia Cooke in Me and Earl and the Dying Girl. This year’s The Edge of Seventeen is a bright writing-directing debut by Kelly Fremon Craig that cuts deep into the angst of a not-so-sweet sixteen. Seven years ago, Hailee Steinfeld won the plum role of Mattie Ross in the Coens’ remake of True Grit. Now she’s back playing a teenager again.

More sexually ‘dangerous’ than the earlier teen films I mention, Seventeen follows a teenager with a worse-than-average image problem. Nadine (Hailee Steinfeld) is a borderline problem case from a ruptured family. Her mom Mona (Kyra Sedgwick) obviously favors her handsome and athletic older brother Darian (Blake Jenner), who seemingly can do no wrong. Nadine was always aware of her secondary status but got along until the sudden death of her loving father, whereupon the walls of inferiority fell in on her. She’s survived total oblivion with a long-lasting friendship with classmate Krista (Haley Lu Richardson), but that crumbles when Krista and Darian become an item. 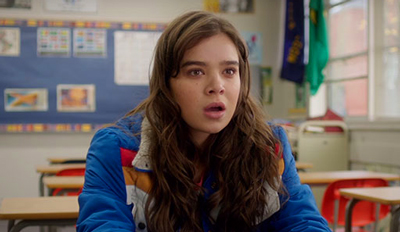 Across one fateful weekend Nadine suffers one disastrous humiliation after another. Nadine allows herself to become infatuated with ex- Juvie Hall troublemaker Nick Mossman (Alexander Calvert). A casual flirtation with friendly classmate Erwin (Hayden Szeto) has rough edges because of Nadine’s bent toward insincere dramatics — baiting and then frustrating the earnest young man. Emotionally scrambled by her frustration with her mother, brother & best friend, Nadine strikes back against her fears of overall failure. Her desperate measures include a graphic social media offer of sex to Nick, the total stranger she’s fantasized about. She even rebels against her mother, essentially stealing her car. The only neutral voice to which Nadine can relate is that of her teacher, Mr. Bruner (Woody Harrelson). Bruner answers Nadine’s attention-seeking outrageous statements – such as threatening suicide — with flat-out sarcasm. As Nadine has a sense of humor, she respects this.

Ms. Craig’s high school comedy-drama is a fantasy, but its characters within are highly identifiable. We like most everyone in The Edge of Seventeen so much that the films tendency toward glib, too-clever dialogue is soon forgiven. Nadine’s first words are so brilliant that we think Mr. Bruner would be begging the girl to write a literary blockbuster, ‘Confessions of a Teen Genius.’ We must also remind ourselves that a teacher like Mr. Bruner would be wise to have witnesses while in the presence of unstable, sex-minded teen girls like Nadine. Although we agree that Bruner intuits the exact correct way to help Nadine, making a joke of a 16 year-old’s announcement that she’s going to kill herself would seem a fast track to the State Penitentiary. 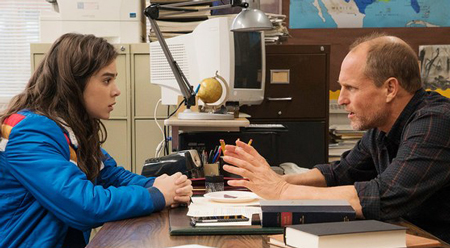 Character comedy is never easy, but Seventeen’s casting has the assured touch of one of its producers, James L. Brooks. Hailee Steinfeld expresses twenty different faces of teen despair, disappointment and rage, without a single false note. And like every teenage girl, when she eventually finds the self-assurance and peace with herself, she becomes glowingly beautiful. What’s scary is seeing Nadine struggle and strain in all of the traditional wrong directions. Although intellectually fit and adept at hurling verbal abuse, Nadine’s travails have hurt her ego to the point that we worry that she’ll turn into a terminal case of zero self-esteem. It’s frightening to see Nadine’s face when the opportunistic Nick offers even a feeble compliment– she is so hungry for approval that she could lose control of everything.

Woody Harrelson turns in a fine supporting turn, allowing the narrative to delineate what kind of man Mr. Bruner really is. For a minute there we think that the Nadine-Bruner relationship might go in an even darker direction. When we see her react positively to her teacher’s home life, we’re assured that Nadine’s values have a good baseline, even if she momentarily loses sight of it. 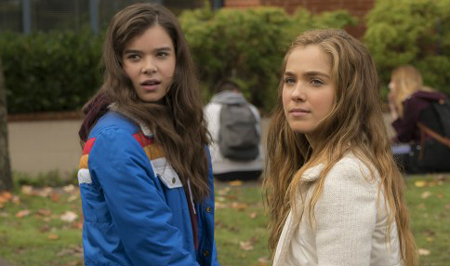 Edge still has to survive in a commercial environment dominated by raunch, so Nadine spouts precocious potty-mouth shockers to make her seem more sexually experienced than she is. More troubling is her ease at unloading withering abuse on people. She’s just expressing her understandable frustration, but in my experience words have a more permanent effect than we see here — people remember foul criticism and tend not to fully forgive slights, even when they want to. In a joke near the end, the hesitant Erwin turns the tables on Nadine with a fake-out trick designed to give her a hard time. She was pretty merciless with him before, but can she take it now? Perhaps these kids have thicker skins; maybe I just can’t see myself fooling anybody in this way.

Like most smart films with a hint of respect for human values, Edge lets pretty much everyone off the hook. As Nadine’s quasi-hysterical mom Mona, Kyra Sedgwick can’t see that she’s withheld her approval from her daughter all this time. It is something of a stretch when Mona suddenly relents — especially as Nadine has just spent 36 hours behaving like public enemy number one. Can the Monas of this world really muster such sensitivity at such an appropriate time? Blake Jenner is okay as the perfect jock brother, who reminds us of Chris Klein’s nice guy character in Election, only not as much of a dumbbell caricature. Given second billing, Haley Lu Richardson’s Krista is a less mentally scrambled teen, who Nadine decides has betrayed their friendship. Early scenes with a different pair of child actresses playing the younger Nadine and Krista are just adorable. Any parent can remember seeing the happiness on their kid’s face when he or she finds a fast friend. 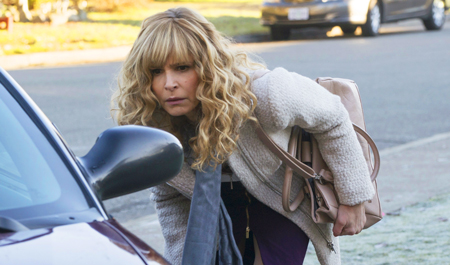 The events play out in a generally affluent locale devoid of social issues. Single mom Mona has been able to keep her attractive house, while Nadine discovers that Erwin lives in a classy villa-estate. Mona’s always off trying to spark romantically with some dentist, while Erwin’s parents are in Korea for three solid months and he has the run of the house alone. Nobody thinks anything of the fact that Darian and Kristy ‘meet cute’ by sleeping together on the spur of the moment. Is it a tougher breed of kids out there that can handle the pressures of such things? Of course this must happen all the time, but not in such a consistently harmless way.

And that’s commercial reality for ya, just as we notice constant product placement for the Coca-Cola company. Bottom line, Haille Steinfeld has star appeal that puts The Edge of Seventeen way over the top, and an engaging supporting cast gives us a pleasant surprise in almost every scene. 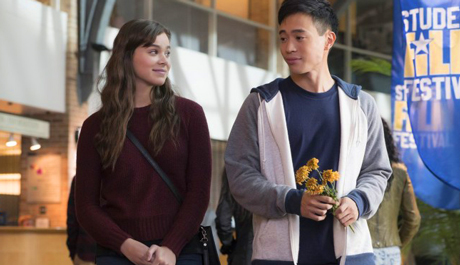 Universal Studios Home Entertainment’s Blu-ray + DVD + DVD + Digital HD of The Edge of Seventeen is a sparkling transfer of this polished production — I haven’t seen a glaring technical flaw in a studio release for years now. The colors flatter the clothes chosen to express the differing personalities of these kids, and it’s nice to see that Nadine isn’t wholly defined by what she wears.

The extras are a gag reel and a group of deleted scenes that would conceivably have slowed the picture down. An ‘actor and filmmaker roundtable discussion’ listed at Amazon does not appear on the disc menu I read. The package contains a DVD copy and the code for a digital download.