William Hurt, Christine Lahti and Elizabeth Perkins do excellent work in this superior drama which delivers an important, unforced life lesson. An emotionless hotshot surgeon gets a dose of his own medicine when he’s hit by a cancerous tumor, and is put through the same wringer that so humiliates his patients. What might be a cynical critique becomes a curiously uplifting drama about the need to include some humanity in one’s profession. Asserting the importance of kindness and empathy to people in need, director Randa Haines’ show is more uplifting than a faith-based film. 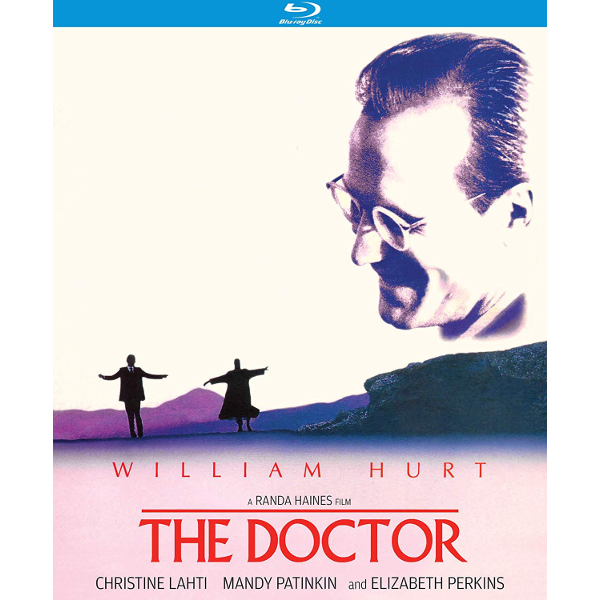 Even in 1990, an industry pro would likely say that realistic stories about doctors and fatal diseases had stopped being feature film material decades before, when TV movies took over that territory. Randa Haines’ excellent drama The Doctor was possibly green-lit as a followup to the respected Children of a Lesser God, which Haines had already made with the same leading man. The generic-sounding The Doctor looks at a simple human situation in complex modern times. Its source book was written by a doctor who, after becoming a patient himself, underwent a change of heart about how he ran his practice and interacted with his patients. The show could easily have been a despairing exposé about bad medicine in general, like Paddy Chayefsky’s flippant, acid farce The Hospital. Robert Caswell’s screenplay keeps things at a believable level of human drama that we can all understand. Have you ever been seen by a doctor that treated you as not a person but a case, a problem for him to defeat and little else? 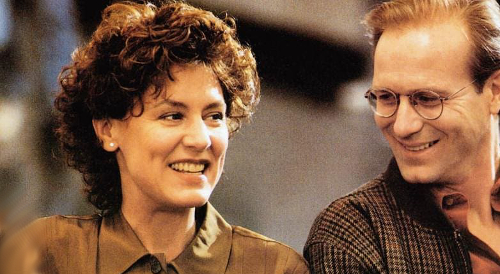 The story is simple enough. Top heart surgeon Dr. Jack MacKee is the closest thing to a god in his element, a large hospital. His expertise is renowned but his philosophy is to minimize his patient interaction. He ‘gets in, fixes the problem and gets out,’ with the idea that the less he concerns himself with distracting emotional relationships, the better work he will do. With a dedicated surgery staff at his beck and call, Jack is a high-performing whiz in the operating room. To keep himself in the right ‘zone’ he plays music in the operating room; his staff sings along. Jack is a great doctor — when something goes wrong he has the tools and the judgment to make the best play. He maintains a lucrative partnership with Dr. Murray Kaplan (Mandy Patinkin), another near-celebrity surgeon. Should a former patient sue for malpractice, they back each other up.

Jack has things his way in every other aspect of his life — he can afford the best of everything and insulates himself from bothersome interpersonal issues. He shares little with his wife Anne (Christine Lahti) and barely sees his son. Besides keeping his family at arm’s length Jack refuses to pal around with patients. He also lords it over the other doctors on the staff, the ones not as stellar or as rich as himself and Murray. In his exalted specialty he doesn’t care about lesser physicians or what they do. 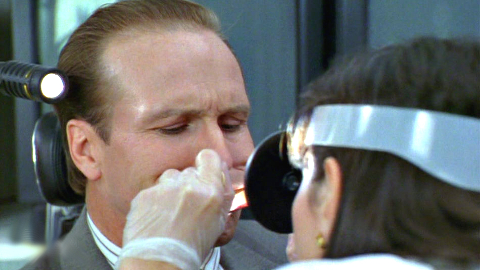 When Jack develops a tumor in his throat his perfect life is turned upside down. For once he must go through the frustrating and demeaning hospital experience like an ordinary patient. He’s incensed when he must wait, fill out forms and in general not be treated like a V.I.P.. He becomes angry when his throat specialist Dr. Leslie Abbott (Wendy Crewson) turns out to be another self-styled celebrity expert who insists on discussing little, and that her decisions not be questioned. Abbott treats Jack’s problem like he isn’t there. When the news gets bad and then even worse, Jack refuses to share it with his peers or his wife; he mostly seems furious that this stupid thing should happen to him, that he’s no longer Mr. Perfect.

Jack all but destroys Anne when he angrily tells her she’s not involved and to mind her own business. He becomes snappy and bitter. Down deep in the hospital is the radiation treatment area, a cold bunker compared to the airy surgery floors that are his domain. Jack mistreats the hard-working, underpaid staff. When he first connects with another cancer patient, June Ellis (Elizabeth Perkins), his attitude is selfish and condescending. After learning that June was misdiagnosed and ignored until her cancer had gotten out of control, he dismisses her feelings with a ‘make nice’ story about a miracle recovery.

Jack has always been the infallible God that rides atop the pyramid of the medical system, and now he becomes its victim: coming out of a procedure helpless and groggy, a male nurse mistakes him for another patient and subjects him to a barium enema, against his protests. His mindset changes only after it dawns on him that something is wrong with the system’s doctor-patient-hospital relationship that he’s always taken for granted. Jack looks into one of Murray’s cases that has resulted in a malpractice charge, and decides to side with the victimized patient against his partner. He comes clean with June and spends more time with her, to the dismay of Anne. And he drops the imperious Dr. Abbott in favor of Dr. Blumfield (Adam Arkin), a throat specialist that he previously insulted and dismissed for being ‘sensitive.’ 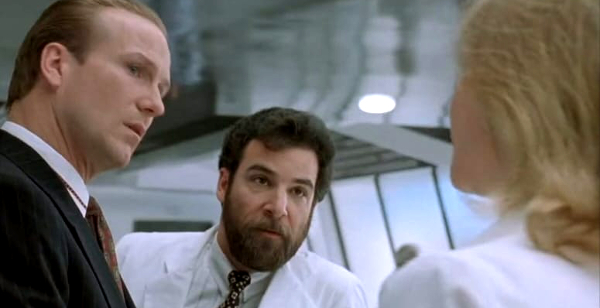 The Doctor is about medicine but applies in part to any profession in which successful people can get the idea that they’re better than the un-anointed, ordinary people they work with or tend to. McKee dresses like a celebrity. Like campus bullies, he and Kaplan criticize and even mildly harass colleagues not as cool as they. The sense of entitlement extends to everything. Anne is expected to make things work to his personal demands and otherwise stay out of his way. He browbeats his interns to stop being so damn sensitive with patients — who would you rather have cut you open, McKee reasons, someone who concentrates on the problem or someone eager to share your feelings?

All that goes away when he becomes an ordinary patient. The denial reaches to avoiding sharing his feelings and substituting humor as a cynical defense weapon. Jack’s attitude to Anne is, ‘It’s happening to me not you, so go away;’ he goes into a rage when someone tries to show concern or pity. Later on The Doctor becomes a very strong positive statement about people in general, as Jack reassesses the way he interacts with others. 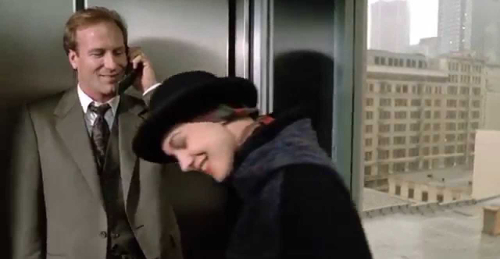 This is one of William Hurt’s best performances, perhaps even better than his fascinating turn as an insular author in The Accidental Tourist. Doctor McKee’s inner imperiousness, and then his transformation into a more reasonable person, is conveyed with acting in which Hurt ‘doesn’t seem to be doing anything.’ His face communicates every nuance of the experience.

Is the director responsible for the strong performances by the film’s women?  The capable Christine Lahti (The Executioner’s Song, Running on Empty) is tasked with a ‘doctor’s wife’ given some very difficult steps. Faced with Jack’s appalling rejection, Anne remains sympathetic even as she reaches the brink of walking out on him, when he ought to need her most. The ‘mellow pixie’ Elizabeth Perkins is a favorite from the Alan Rudolph picture Love at Large. Her stage-4 cancer patient June is an impassioned portrait of a woman living alone, trying to maintain her dignity in the face of a negative prognosis. The Doctor never insults the viewer: the helpless June does NOT become simply a therapeutic vessel for Jack’s recovery.

Nothing in the movie is false. One passage in the second half does stretch things a bit. Jack impulsively takes June on a long-distance trip ‘to fulfill a wish,’ but the odd situation is not over-glamorized or taken in an overtly romantic direction. They bond by dancing in the middle of the Nevada desert, a situation that feels a little too ‘metaphorical.’ But nothing silly results and the sequence does provide a visual break from radiation and cat-scan sessions. A very good scene shows McKee trying to deny the effect of his condition on his surgical skills. But he has the good sense to scratch himself from an operation — he’s far too responsible to allow his ego to overcome his professionalism. 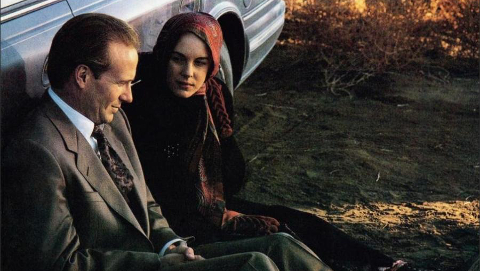 Randa Haines’ direction can’t be faulted — not three minutes in, we’ve left behind any doubt about the show being ‘just a drama.’ PC sharks may be offended by Jack McKee’s somewhat boorish surgical practice of playing a lewd Country song in the operating room, and teasing one of the nurses (harassing her?) into singing along. Ms. Haines says in her commentary that her research showed the scene to be tame compared to common practice, which indicates to me that sexism was (is) a strong part of just about every social/professional situation.

The show really pulls one in, involving us fairly in a situation easily understood but too often trivialized in popular dramas. It deals with life & death situations, bad news and tragedy without a trace of easy sentimentality or forced moral lessons. McKee’s ‘rebirth’ with a more open philosophy may not change his basic arrogance, but he should feel far less entitled to the perks of his skill, and more grateful for the good people in his life.

The KL Studio Classics Blu-ray of The Doctor is a fine transfer of a show from the early 1990s, when many movies were given mediocre treatment for home video. The beautiful hospital interiors were apparently large sets (!) built by Ken Adam. The lighting also stresses the way Jack McKee’s cocoon of privilege is burst by his sickness. Instead of relaxing with the toys, stereo and video game machine in his playroom back home, he must sit and stew in depressing hospital waiting rooms. Quite a lot of music is heard in the picture, mostly pop songs that Jack uses to tell himself he’s living the good life. The mono soundtrack is strong. 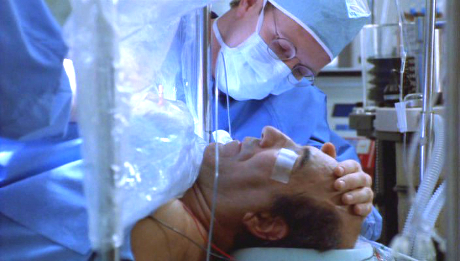 In her feature commentary director Randa Haines remarks on her aims, and what it was about the story that attracted her: she says that she believes that people can transform their natures, but it has to be their doing, because they want to. She notes that the quasi-party atmosphere in the operating room scenes — joking, music playing, dancing — were considered new and somewhat disturbing in 1991. This was before the slew of millennial doctor shows on TV, each outdoing the next for extreme behavior. Designer Ken Adam helped her create an aura around William Hurt’s doctor, in the crystal palace aspect of the upper floors of Jack’s hospital, and the designer trimmings of life as part of a ‘golden couple’ unchallenged by hardship. Raines directed William Hurt twice, but when asked to describe him only uses the words complex and complicated. The interesting contentious actor has always resisted being typed by anyone; evaluations of him by others range often combine admiration with frustration, suggesting that he does not suffer fools lightly, and sometimes does not play well with others.

Ms. Raines has a firm handle on the various levels of film communication — she can speak about metaphors yet keep everything on the human level. It’s a good listen. Helping with the commentary is filmmaker Heather Buckley.

The disc does not come with subtitles, which was probably because that was the format of the master provided by Touchstone. This is a raw deal for many older viewers likely to be facing health issues described in the movie — does Kino think that average 20 year-olds will be interested in a show with this content?