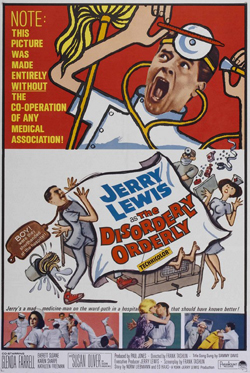 As Ethan de Seife notes in his essential, just-published study of writer-director-cartoonist Frank Tashlin, (“Tashlinesque”, Wesleyan University Press), this final collaboration between Tashlin and Jerry Lewis accentuates the tension between their divergent comedy styles, one of “the most vexing cases in the Tashlin/Lewis authorship question.” Wacky cartoon gags alternate with rampant sentimentality in a film that anticipates Lewis’s upcoming directorial canon. If you’re curious about the semiotic fun phrase “diegetic rupture”, de Seife’s long-awaited examination of Tashlin’s well hidden career is for you.