Engaged to direct by a reputable producer, Jesús Franco takes yet another stab at conventional B&W horror. The pulp thrills get a boost through the contributions of talented collaborators: excellent camerawork flatters the idiosyncratic obsessions of a writer-director in search of his own dream-world sensibility. Although it’s not saying much, this might be the best of Franco’s earlier B&W horror output. 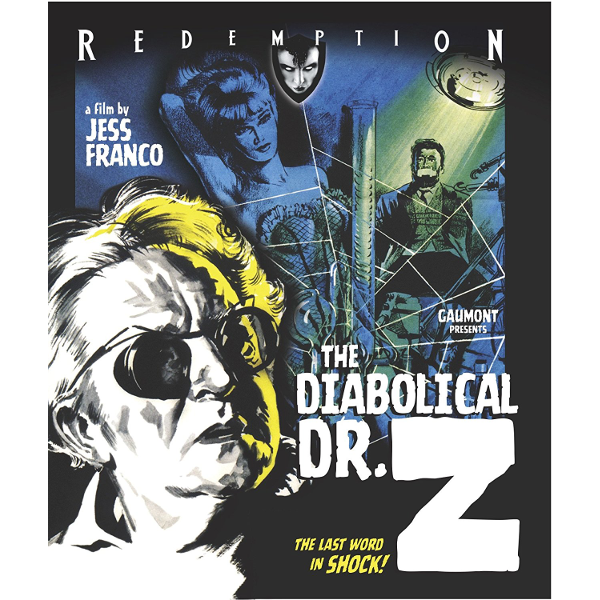 Am I correct when I remember that there was once a drive-in triple bill of The Horrible Dr. Hichcock, The Diabolical Dr. Z and The Awful Dr. Orlof? I remember contemplating strange newspaper ads for drive-in horror marathons that I knew I’d never see. Fifty years later, I have seen a lot of those pictures. Most are terrible, some are good and a few are sensational.

The murder mystery hodgepodge The Diabolical Dr. Z, smartly titled Miss Muerte in its original Spanish version, begins when the criminal Hans Bergen (Guy Mairesse) escapes from prison and falls into the clutches of Dr. Zimmer (Antonio Jiménez Escribano), a madman researching the manipulation of the human brain. The diabolical doctor’s ‘Z-Ray’ technique frees Bergen from moral restraints and reduces him to the status of thug henchman for Zimmer and his loyal daughter, Irma (Mabel Karr). When Zimmer’s request for permission to continue experimenting on human subjects is publicly rejected at a scientific conference, the doctor dies of a seizure. Vowing revenge against the three colleagues she holds responsible for Zimmer’s demise, Irma fakes her own death and uses Bergen to turn the exotic dancer Nadia (Estella Blain) into a seductive killing machine. The weird murders and Z-Ray atrocities continue until Nadia’s consort Philippe (Fernando Montes) helps a pair of cops (Jesús Franco and Daniel White) get to the bottom of the mystery.

The Diabolical Dr. Z is a slightly up-market horror offering from Señor Franco, who had been directing slightly higher-profile pictures for French and Spanish producers. Franco found a real opportunity with the prolific writer Jean-Claude Carrière, who had already penned scripts for Pierre Étaix, Luis Buñuel and Louis Malle. They worked together on Carts sur table (Attack of the Robots), an Eddie Constantine spy spoof about killer automatons. Franco was already fond of the remote-control killer gimmick. His previous picture Doctor Orlof’s Monster features a zombie-man radio controlled via diabolical application of ultra-sound. Carrière must be the most prestigious writer ever to work on a Franco picture, adapting and scripting the director’s story.

Did Carrière introduce Franco to producer Serge Silberman, whose output overflows with critical classics? Between the screenplay and excellent B&W cinematography by Alejandro Ulloa, The Diabolical Dr. Z has production values not seen in Franco’s previous no-budget efforts, that had used whatever actors were available to the director. Franco had a knack for finding excellent locations with gothic architecture, but his improvised shoots didn’t always make them presentable. The lack of time must have put the crimp on Dr. Orloff’s Monster, in which fairly well blocked shots alternate with rushed non-scenes that come off as completely amateurish.

Franco’s camera angles and coverage are much improved here, giving Dr. Z a more coherent continuity. His actors are all on the same page as well. The nominal hero Fernando Montes is bland and the first Z-Ray zombie Bergen is a generic thug, but the slinky Estella Blain is clearly into her role as a femme assassin. Her Nadia is introduced in a cabaret act as ‘Miss Muerte.’ One of her costumes is a see-through body stocking with an erotic spider motif. A thin but well-filmed music number shows Nadia writhing on a web painted on a stage floor. She finishes her attack on a mannequin by placing a skull mask on her face, providing Dr. Z with its solitary pulp frisson. Ms. Blain also puts conviction into her later remote-controlled murder missions.

Several other actors are from Franco’s stock company of pals, but the most notable is Howard Vernon, the original Awful Dr. Orloff, as one of the scientists unjustly blamed for Dr. Zimmer’s death. Again, it’s likely that a reasonable time to film scenes improves on the acting as well as the coverage. The creepy-looking Vernon was an obvious asset for Franco because he could appear to be in character even when standing around nervously, without direction. Here all the acting is improved, simply because the players are receiving direction.

It’s disconcerting when Dr. Zimmer is eliminated in the film’s second reel. Not only is he the supposed main character, he’s got a terrific madman look about him, with wild Mabuse hair and spooky eyeglass frames that lend him manic ‘eyebrows.’ The revenge killings that take up most of the picture are simply not that interesting; that format went out of favor in the 1940s with Boris Karloff at Columbia.

Jesús Franco’s reasonably energetic direction can’t overcome what is essentially a lame story — had Franco anything at all to offer beyond his vague ‘killer female’ theme, this seems to have been a good opportunity to express it. Individual scenes work reasonably well, such as when Irma murders a woman on the road to provide a body with which to fake her own death. Important genre requirements are neglected. It’s unclear which writer is responsible, but the idea that the cop played by Franco can’t apply himself to the case because he has triplets at home to care for, is beyond lame. I guess it was either that or have the cop pad his dialogue with worries about his smoking habit. The shots of Irma plunging fat needle-rods through the temples of her victims look very good, with well-chosen angles that enhance the trauma of clinical penetration (the alignment of the needles is much more convincing than in the still photo above). The goofy glass operating armature isn’t too ridiculous either, even with its robotic arms that serve as restraints. But Irma’s burn makeup wouldn’t pass muster in a high school home movie. The scars on her face look like putty and probably are — either that or peanut butter. Irma’s ‘cured’ face seems smeared with granular vaseline. With its spooky lighting and atmospheric locations put to good use, Dr. Z still can’t muster a decent monster mask or two.

The proof is in the viewing — Dr. Z does look good and Jesús Franco’s direction is not at all bad. But with so little forward momentum our interest in the story flags far before the finish. This show is for Franco detractors that say, ‘see, he could make something reasonably competent, if only he would apply himself.

The defense for Franco seems to be that he was like a jazz musician on film — the more freely he expressed his strange visual and sexual obsessions, the better his art. In other words, Franco needed to be a commercial director, but had little interest in conventional narratives.

We’re told that Franco found these literal, formal gothic stories too limited, and that his best period began when he started to improvise his films from two-page outlines, aiming for dreamlike effects and ignoring conventional notions of ‘what a movie needs to be.’ Some of Franco’s later Eugenie. . . the Story of her Journey into Perversion seems an honest effort at that goal. Yet most viewers and reviewers  have difficulty accepting what come across as awful direction and amateurish production deficiencies. It’s not a good sign when Franco’s fans try to pass off shots grossly out of focus as deliberate artistic choices. We all have preferences and biases, and reasonably honest criticism needs to be open to new artistic visions. But warming up to Jesús Franco’s filmography is an uncomfortable stretch.

The Redemption and Kino Lorber Blu-ray of The Diabolical Dr. Z is the best B&W transfer of a Jesús Franco picture I’ve seen. Alejandro Ulloa’s crisply focused and handsomely lit visuals come off extremely well, and the source film is in perfect condition. David White’s jazz-based music tracks sound very good behind certain scenes, but are not often a good fit for the suspense scenes on spooky nighttime streets.

The big extra is a commentary by Tim Lucas, Franco expert extraordinaire. I applaud Tim’s thorough knowledge of the artistes attached to the picture; he comes forth with backstories for many of them, and even shares anecdotes from Franco’s sets. Estella Blain appears to have been an exhibitionist self-billed as ‘the body;’ even Lucas admits that that was Franco’s most important need in an actress. Lucas points out details that help us understand Franco’s directing choices, but too often strains to associate the Spanish director with greatness. A simple shot from the back seat of a car does not infer a relationship between the genius of Franco and that of director Joseph H. Lewis.

I’m not a Franco enthusiast, but I believe that every critic has the right to pick their artistic champions. I openly admit that I haven’t reviewed many of the discs that have emerged in the last couple of years, of films by Jean Rollin and Alain Robbe-Grillet; they just don’t appeal. Dr. Z definitely has more going for it than most of the early Francos I’ve seen . . . but does that mean I’m mired in conventional entertainment values?