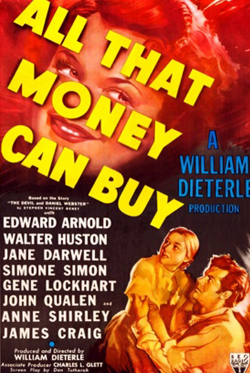 The Devil and Daniel Webster

A classic piece of Americana. William Dieterle’s haunting fantasy is that rarity, a major studio art film. It’s had a rocky ride over the decades but is now available uncut on DVD after years of neglect, recuts and spotty distribution under a myriad of titles, including All That Money Can Buy, Here is a Man, A Certain Mr. Scratch, and Daniel and the Devil. As the Satan’s smolderingly sexy consort, a pre-Cat People Simone Simon must have made quite an impression on Val Lewton. Alec Baldwin directed and starred in an updated remake in 2003, which was finally released in 2007 as Shortcut to Happiness with Baldwin’s name removed.