“Here is the screen’s most shocking exposé, of the ‘Baby-Facers’ just taking their first stumbling steps down Sin Street U.S.A.!”  Robert Altman’s first feature film is far too good to be described as anything but an expert step toward an impressive career. But he had to deal with a young actor who drove him up the wall, Tom Laughlin. 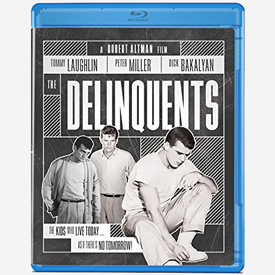 The hoods of tomorrow! The gun molls of the future!

Ah, the glorious Juvenile Delinquency film, or J.D. Epic, as it was once dubbed. Despite the fact that the problems of young kids have been around forever, we all know that teenagers, teen music and teen angst came to the forefront of the culture in the 1950s. Where were they before? Latch-key kids caused havoc during WW2 because all the parental supervision was working extra shifts at the war plants. Val Lewton tried to make a movie out of the issue (Youth Runs Wild) but the censors cut it to ribbons. Until Marlon Brando, Rock ‘n’ Roll and outright teen rebellion, kids were just ‘troubled youth’ to be seen and not heard. First, Vic Morrow pulled a switchblade in civics class. Then James Dean whined, shrugged and like a leaky hose externalized all over the screen, and Teen-dom exploded. All the child psychology that the movies had laughed at for fifteen years suddenly found a purpose — to explain why Billy cut up Mom’s new sofa, and why Betty was going all the way with Rocco, the pinsetter at the bowling alley.

Hollywood tried to suppress the craze. Consul Clare Booth Luce tried to keep Jungle and Rebel from being exported abroad: we don’t want to fuel Commie propaganda!  But Hollywood was too blind to realize how big-spending teens were affecting the consumer demographic. America was doing so well that huge numbers of teenagers now had access to money, and wanted to see movies about the most exciting subject in the world, themselves.

That left the field to the independent producers and mostly dumb and exaggerated exploitation fare stressing Hot Rod Gangs and Dragstrip Riots. There are good movies in the J.D. subgenre, though, that showcase excellent talent. I’ve reviewed two ‘girl in trouble’ pictures that really stand out. Unwed Mother gave us Robert Vaughn as a young cad who leaves a poor girl to the mercy of a back-street abortionist played by . . . Timothy Carey. The excellent  The Careless Years sees a callow Dean Stockwell and an innocent Natalie Trundy decide to get quit high school and get married. 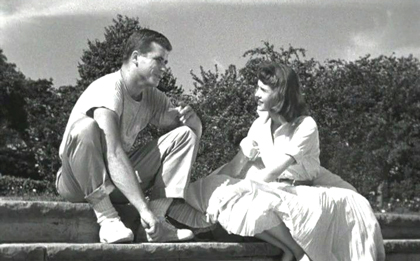 Very near the beginning of the craze is the United Artists movie The Delinquents, released in 1957 but filmed in the Summer of 1955 in Kansas City, before Jungle and Rebel had even left the theaters. Local filmmaker Robert Altman’s day job was directing for the industrial film outfit the Calvin Company. Looking for a big break, he accepted $63,000 from an investor who wanted a delinquency epic, and turned one around in a matter of weeks. The Delinquents is realistic, reasonably well acted and extremely well produced for a ‘regional’ production. It’s got violence, drinking, dancing, a drive-in theater rumble and a scene where a teen girl breaks down because her parents demand that she break up with her boyfriend. Writer Todd McCarthy nailed the prime ‘angst’ dialogue in Altman’s five-day screenplay that would become a mantra for the subgenre. When the girl’s parents tell the poor slob hero to scram, his girl wails at them, “Why can’t you leave him alone?” Teens are under attack, man. Something has to be done. 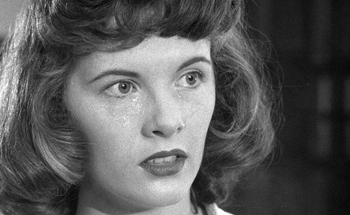 With a great deal of night shooting on Kansas City streets (I see ‘Pennsylvania Street’ on one sign) The Delinquents gives us a strong feel for the Midwest. Someone tell me what those night bugs buzzing around are, the ones apparently attracted by the movie lights?

Altman imported three actors from Hollywood, all good choices. Richard Bakalyan had mainly been in TV shows — I’m a tad suspicious of the IMDB listing that places him in an all-Star Italian movie with Sophia Loren. A great actor, Bakalyan’s menacing screen presence prevents much of the picture from going slack. Also performing well and making trouble is Peter Miller. He had played the rapist teen in Blackboard Jungle without credit, and (lucky guy) would join the crew of the Star Cruiser C-57D. But topping the list is Tom Laughlin, who seems a living, breathing James Dean imitation. As Scotty Wilson, Laughlin seemingly can’t stay still for a moment. It’s a good performance but mannered as all get-out. Already in his mid-twenties but playing a teen, Laughlin would stumble around Hollywood, waiting seventeen years before becoming a smash star as Billy Jack. 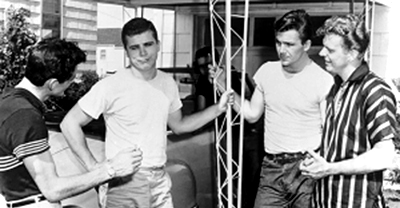 Altman’s script is believable. After being told he can’t see the weeping Janice (Rosemary Howard) any more, Scotty (Tom Laughlin goes to a drive-in, where he’s suckered into a fight by a carload of troublemakers and their girls. Cholly (Peter Miller) is the leader, but the psycho of the bunch is Eddy (Richard Bakalyan), a belligerent misfit who takes an instant dislike to Scotty. Tricked into thinking he’s found new friends, the (really gullible) Scotty allows Cholly to pick up Janice for him the very next night, to sneak her past her parents. They end up at a beer & make-out trespass house party, where Cholly and Eddy threaten Janice. When the cops bust the party, Eddy insists that Scotty was the snitch, and with the equally despicable Cholly determines to teach the New Kid a lesson.

The direction is smooth and most of the acting is fine. The local cast convinces, especially the ‘future gun molls’ with their average looks. They aren’t the teen-queen models that show up in some A.I.P. and Allied Artists pictures. When a lookout for the party makes out with his date, they’re lying prone on a picnic blanket.  Most Hollywood-spawned J.D. epics were careful not to offend exhibitors, and kept things more on the chaste side.

Local actress Rosemary Howard is a bit awkward but has the right poise to be the sheltered ‘good’ girl — if Scotty wasn’t such a dense fool he’d see that she’s terrified and repulsed by the party shenanigans and get her the hell out of there. I’m a pushover for teen girls trying to do the right thing; although Ms. Howard was herself 25 during the filming she holds up her end. Altman’s second wife Lotus Corelli plays Janice’s mother, the kind that insists that ‘father and I are ruining your life because we love you.’ At least Altman doesn’t fill his script with weird incestuous mumblings as did Rebel without a Cause. As Scotty’s sister, Altman’s daughter Christine is the only one to play her real age, eight. She’s excellent. 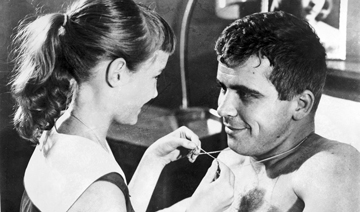 Robert Altman is known as a marvel with actors but he reached his limit with his first ‘star’ Tom Laughlin. Todd McCarthy describes Altman blowing a fuse on the set. To put himself into the ‘zone,’ Laughlin wasted time with Method hi-jinks such as running around the block twice to make himself suitably winded, or insisting that he be the one to cue the camera, etc. It’s not a bad performance but Altman couldn’t stand it. He practically disowned the picture even though it became his ticket out of Kansas and into Hollywood TV work.

Altman’s assistant director was Reza Badiyi, a local talent who went on to a highly prolific TV career directing and producing. He’d later be tapped for assistant work on that other overachieving independent film from Kansas, Carnival of Souls. Filmmaker Herk Harvey was also in the industrial and educational film business, just as was George Romero ten years later. The somewhat stilted acting in Carnival only adds to its sense of weirdness. Robert Altman’s mostly naturalistic performances and polished standard direction surely served as a much better calling card for career advancement. 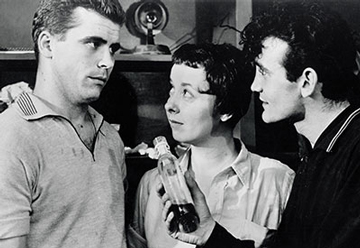 It shouldn’t be surprising that The Delinquents waited a full year to be released. It’s possible that its executive producer tried to hold out for a better deal, but it’s also likely that the film’s realistic tone caused difficulties — Altman didn’t make his hero squeaky-clean or end the movie suggesting that young love will conquer all. A couple of changes seem to have been imposed on the picture to assuage bluenoses like Lloyd T. Binford, a Memphis film censor (and white supremacist) who served as a de facto gatekeeper to the screens for a huge swath of the South. Two nagging voiceovers have been plastered over the title sequence and the final scene, droning speeches that add a paternal, reassuring ‘author’s message’:

In a second change, a couple of key shots were trimmed from the final scene where Cholly attacks Scotty with a switchblade. The continuity scrambled, suddenly Cholly and Scotty are on the other side of the room. Amazingly, the shots lifted from the feature can be seen in the trailer — including the ‘money’ shot of Cholly whipping out the knife and flicking its blade open. God bless trailer makers.

Altman’s TV career picked up steam but it took him several tries to score in features. Curiously, his next theatrical effort was co-directing The James Dean Story.  Just like Tom Laughlin he’d have to wait a fifteen full years before hitting the big time with M*A*S*H.

Reference: Todd McCarthy’s article The Delinquents, in Kings of the Bs, E.P. Dutton 1975 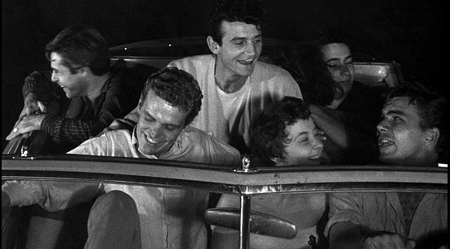 Olive Films’ Blu-ray of The Delinquents is a stunningly good transfer of this impressive feature debut. Old 16mm prints were dull with muddy sound, but the new scan has an attractive B&W image with a patina of natural grain. This is the first time I’ve seen the show in a decent transfer and at the right aspect ratio. The MGMHD cable channel has shown The Delinquents for years, but always with the same faulty dupe with chattering motion issues.

The remastered audio is also as clear as a bell, showing that the original dialogue recording and mixing is actually quite good. The disc has English subs as well. The only extra is an original trailer, which billboards all the violence and contains the missing knife blade shots craved by switchblade fanatics everywhere.