One of the best international thrillers ever has almost become an obscurity, for reasons unknown – this Blu-ray comes from Australia. Edward Fox’s wily assassin for hire goes up against the combined police and security establishments of three nations as he sets up the killing of a head of state – France’s president Charles de Gaulle. The terrific cast features Michel Lonsdale, Delphine Seyrig and Cyril Cusack; director Fred Zinnemann’s excellent direction reaches a high pitch of tension – even though the outcome is known from the start. 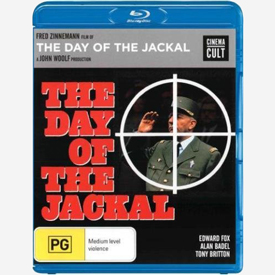 Director Fred Zinnemann reclaimed the international intrigue genre from escapist 007 fantasies with this terrific story of political assassination. Author Frederick Forsythe began by ‘amiably falsifying’ history, implying that his assassin character, who gives himself the code name ‘Jackal,’ was the murderer of actual assassination targets Patrice Lumumba in the Congo and dictator Rafael Trujillo in the Dominican Republic. But Forsythe’s writing did affect history when, in connection with the book, the real-life international terrorist Ilich Ramirez Sanchez came to be known as ‘Carlos the Jackal.’

In The Day of the Jackal the legendary Zinnemann essentially showed the world that an old filmmaker had what it took to out-film the younger generation — this spy chase / murder thriller is a real grabber, as realistic and believable as anything made until that time. 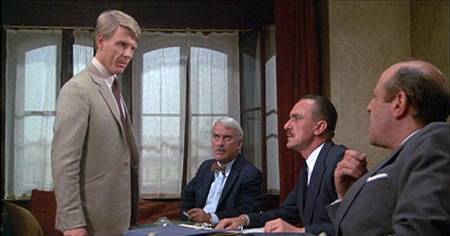 The early ’70s were nervous years of outrageous political violence all around the globe. The events of The Day of the Jackal take place ten years before, when President de Gaulle’s French government granted independence to Algeria after an eight-year war that demoralized and polarized the nation. The country is then terrorized by the OAS (Secret Army Organization), a group of Army fanatics that refuse to accept this final blow to the Empire. Branding de Gaulle a traitor, The OAS try to kill him with an armed ambush on the streets of Paris. When that fails, they hire an anonymous hit man (Edward Fox) to finish the job. They manage to plant a spy (Olga-Georges-Picot) in the bed of a French security minister, while their code-named Jackal rounds up the tools of his trade — a weapon to do the killing, and various alternate identities to help him get away afterwards. To pay his fee of $500,000 dollars, the OAS commits a string of bank robberies. By kidnapping and torturing an OAS member, the French intelligence learns that the Jackal has gone into action. The Minister of the Interior (Alan Badel) orders an all-out investigation, giving ace detective Claude Lebel (Michel Lonsdale) special powers to find and neutralize the killer, whoever he is. Lebel takes command of much of the state bureaucracy to zero in on his quarry. Thanks to tips from the minister’s new ‘mistress,’ the OAS is able to tell the assassin what he needs to know to avoid capture. Even when his cover is blown thee brilliant, ruthless Jackal presses forward, motivated by professional pride and the excitement of the chase.

An impressive production in every respect, The Day of the Jackal avoids the usual mainstream trap of building the movie around star billing. We’re thinking about the story, not Robert Redford or Paul Newman. The emphasis is instead on a rich gallery of characters led by the charismatic, devious Edward Fox and the quietly brilliant Michel Lonsdale. It’s the defining film role for each. Class-act producer John Woolf (Oliver!, The Odessa File) allowed Zinnemann to follow a docudrama format. Americans in 1973 were impressed by the way the story hops between cities and countries, taking for granted action scenes staged on Paris boulevards and the crowded streets of Rome. 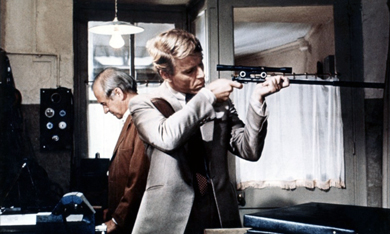 The movie must have seemed especially important to Europeans, as in 1973 the continent was terrorized by waves of political violence by the Red Brigades, Palestinian nationalists in Munich and anarchist criminal armies in Italy. The idea of outrageous gun battles breaking out on city streets has only now become a reality in America, but Jackal is a reminder of how tough the war between political extremes could get. Crack second unit director Andrew Marton (55 Days at Peking, Crack in the World) helped Zinnemann stage the famous attempted ambush on de Gaulle, and the result looks like real news film.

Jackal impresses on all counts. The casting of two dozen interesting roles is so good, we aren’t bothered by the fact that everyone speaks English. The screenplay by Kenneth Ross makes a complicated narrative play out with a minimum of dialogue, and director Zinnemann keeps the fast-changing story going with remarkable clarity. Although we withess the expected political progress meetings, and Lebel receives important news by messenger and telephone, we get none of the ‘information dumps’ of today’s action dramas. There are no instant research tools in the search for the Jackal, no magic computers, as on TV’s N.C.I.S.. Inspector Lebel orders an army of police helpers to search through endless paper passport records. Thanks to an appeal to the English Prime Minister, Lebel has Scotland Yard doing the same.

In today’s more security- conscious world we’re impressed by how much effort is expended to identify and locate Jackal. Lebel knows that he’s been given more power than anybody in France but the President, and he uses it. When the Jackal leaves the slightest trace, Lebel has planes and helicopters at his disposal to whisk Lebel him across the country. He orders that hotel register notices be collected daily throughout France, and brought to the police by special motorcycle couriers. When Lebel succeeds in plugging the info leak that’s been giving the OAS and Jackal an edge, the Interior Minister asks how Lebel knew which minister’s phone to tap. In a hilariously underplayed moment, Lebel answers that he didn’t know, so he tapped all of the ministers’ phones. They have to admit that they did give him the legal authority to do so. 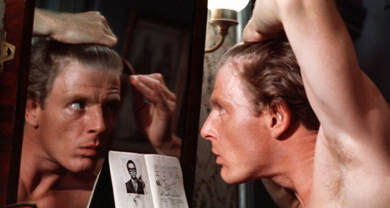 With the President’s life at stake from a real threat, the show doesn’t shirk from telling the truth — to find out what they need to know, the shadowy security forces torture to death an OAS operative. The interesting angle there is that the OAS man is played by Jean Martin, whose face will be indelible to anybody who has seen Gillo Pontecorvo’s The Battle of Algiers — Martin plays the implacable paratroop commander who spells out the harsh necessity to torture the Algerian rebels. Here, he’s on the other end of a torture session.

Zinnemann and Ross’s accomplishment is a tight narrative that communicates mostly through visuals. We understand what’s happening to many people in many places, with relatively few verbal explanations. We’re fascinated by the Jackal’s thorough preparations, and the brilliant way he improvises when the mission starts to go crazy. Only once or twice does he evade Lebel by sheer good luck. When things go wrong he’ll change his plans, steal or re-paint a car, or even shack up with the first woman he finds. Jackal does his share of killing, almost all of which happens off-screen. The way he kills one woman, in bed, is almost puzzling — she drops dead without even tensing up. The Jackal could have earned a good living as an executioner – he’s faster, more reliable and certainly cheaper than fancy gas chambers and electric chairs. 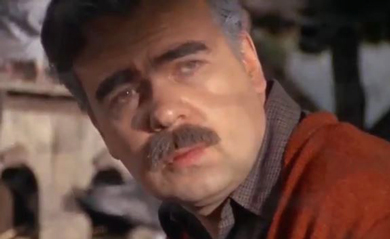 Above all we’re impressed by the maturity of Zinnemann’s direction. The first time through this show the tension goes through the roof, even when we know the Jackal will not succeed. Zinnemann uses no editing tricks beyond simple cross-cutting, and things rise to a panic mode just the same.

Although we see a glimpse of a sign on the side of a building that reads ‘Happy 1963,’ the movie does little to enforce a period feel. There are plenty of late 1960s cars around and hairstyles look longer and more fashionable. The minor anachronisms make no real difference, no more than all those Frenchmen speaking English. We instead feel the same buzz as in an old thriller by Fritz Lang, or one of those silent serials like Fantomas: society is fighting back against a super-villain who knows all the tricks. The political violence fantasized in all those silent serials has now become the norm. 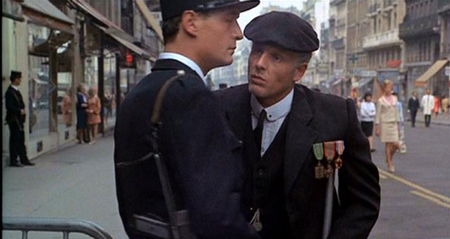 Americans might know Cyril Cusack, the armorer who makes the Jackal’s custom-concealable rifle, but many faces in the show are only vaguely familiar. The OAS rebel who goes before a firing squad (“No Frenchman will shoot me!” is Jean Sorel, who we saw as the husband in Buñuel’s Belle de jour. Alan Badel was at the time best known here for playing a villain in Arabesque. One would have to be a foreign film buff to know the others — Delphine Seyrig (Last Year at Marienbad, Stolen Kisses) is a woman that runs afoul of Jackal in a country hotel. Olga Picot-Georges (Je t’aime Je t’aime) is an OAS spy. Most of the smaller parts are filled by Britons and Frenchmen, favorites like Maurice Denham, Eric Porter, Derek Jacobi, Timothy West, Ronald Pickup, and Howard Vernon. Everyone recognizes the gendarme from the finale but can’t place him; he’s Philippe Létard, later seen in (French Connection II).

Fred Zinnemann’s reputation as a star director could use a little polishing; Andrew Sarris slighted him (“Less Than Meets the Eye”) yet his weak films are decent and his good films exceptional. He’s directed a tall stack of award- nominated performances. More than many of his fellow exiles from Hitler’s Germany, Zinnemann remained committed to his politics. His The Search is still the most humanist of all the docudramas about the aftermath of WW2, and his The Nun’s Story is one of the few brutally honest films about the workings of church religion. His career was a tragic victim of the collapse of Hollywood in the late 1960s, when his massive production of Malraux’s Man’s Fate was cancelled just as it was about to begin filming. It accounted for a seven-year hole in his working life. Despite the success of The Day of the Jackal Zinnemann would make only two more movies. 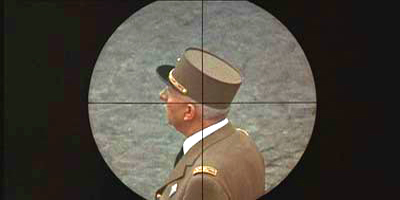 Shock Entertainment’s  Blu-ray of The Day of the Jackal is listed as a Region B release, but it played fine on my domestic machine. It’s definitely a title that ought to be out here in America, and that is so good that I don’t mind going out of my way to get it.

The transfer is excellent, clean and colorful and accurate to all the soft hues in the cinematography. Jean Tournier’s camera takes advantage of real parades and mass events in the streets of Paris, adding to the realism. Georges Delerue is credited with a film score that disappears after only a couple of minutes, leaving the rest of the movie to get by on cinematic energy alone. So I assume there’s no soundtrack album?

Shock is an Australian outfit and the disc packaging says that the film is licensed from Universal. There are no subtitles, zero extras and just a handful of chapter stops for this fascinating picture, so get ready for a library visit to read about the impressive Fred Zinnemann. I was privileged to listen to his uncut interviews for George Stevens’ Jr., and was impressed by his clarity of thought and gentle but sharp responses to questions. When talking about the Director’s Guild during the blacklist period, Zinnemann comes across as a man of great integrity.