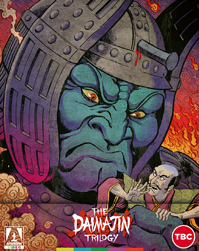 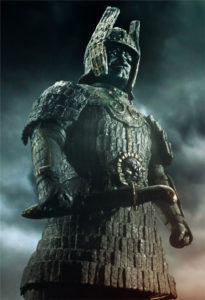 Japanese monsters seem to bring out the best in home video companies—Arrow Films’ The Daimajin Trilogy is the most beautifully wrought Blu ray release since Criterion’s momentous Godzilla set. Though the films themselves don’t match the kaleidoscopic allure of Matt Frank’s cover illustrations, the Daimajin movies remain rousing entertainment for both monster-crazy kids and seasoned movie fans who should appreciate the sky-scraping samurai’s exciting if utterly predictable adventures.

Predictable, because each film in the trilogy is essentially the same movie—same beginning, same middle, same end. Utterly predictable but then so are the Bond films—the lack of any real surprises is fundamental to their comfort food aesthetic. Produced one after another in 1966, these fantasies from the Daiei Studios belie their hasty execution—each is elegantly produced with grand widescreen imagery, stage-bound but meticulous set design and a mustache-twirling crew of villains ripe for Victorian melodrama. The main attraction is the “demon god” Daimajin and though he has a perpetual snarl on his face the big fella is a softie at heart—a two-fisted big brother ready to fend off any big bully (children are especially drawn to that aspect of his character). The films weren’t released theatrically in America but AIP-TV beamed them into U.S. living rooms beginning in 1967, usually on a lazy Saturday afternoon where the stone giant went toe to toe with Wide World of Sports and The Sons of Hercules. 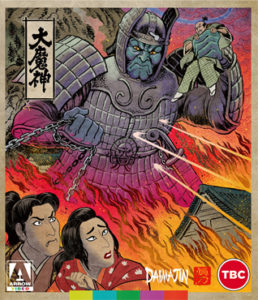 Daimajin, released in Japan in April of 1966, lays down the rules of the game; in 12th Century Japan an otherwise idyllic hamlet is brutalized by a warlord whose cruelty seems to have provoked nature itself—a series of mysterious earthquakes has begun to roil the landscape but the dictator is determined—more blood will be shed and nature be damned. The villagers turn to the supernatural for help, an ancient stone samurai buried up to its armor-plated chest within the mountainside. Their prayers—and the tears of the young heroine played by Miwa Takada—wake the behemoth who makes quick work of the despot and his army via a Kong-sized rampage (pro tip—avoid his feet). Daimajin doesn’t have Max Steiner to serenade his spree but Akira Ifukube’s bellicose rhythms are comforting on their own—they recall Godzilla’s heyday. Though Daimajin does possess the primitive appeal of Carl Denham’s big monkey, the stone-faced leviathan is more ambivalent in his nature: when he slumbers he has the benign attitude of a priest at rest—once awake his kindly features are replaced with a neon green grimace that could give little ones nightmares. Daimajin’s debut was directed by Kimiyoshi Yasuda who was well-versed in the ways of the samurai and he proved it with films like Adventures of Zatoichi and Sword of Satan. He handles the demon god’s tantrums with equal aplomb. 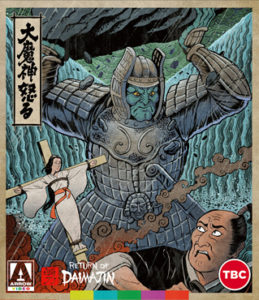 The trilogy changed directors and casts with each entry but the basic crew was retained over the series including screenwriter Tetsuro Yoshida who did his best to ring changes on a formula that was literally set in stone. Though Daimajin is in the tradition of those mythological spirits of nature called the Kami, Yoshida appears to have invented the character from whole cloth. But the writer’s creative energy seemed to flag in the series’ second outing, Return of Daimajin, released in Japan in August of 1966. Directed by Kenji Misumi, the movie has a listless spirit—surprising because the filmmaker’s Lone Wolf thrillers are marked by their breakneck action. Yoshida and Misumi give Return a few unexpected twists with some rather pointed religious imagery; the angry Daimajin parts the sea like a Kaiju Charlton Heston and our leading lady, the breathtaking Shiho Fujimura, is bound to a cross by the vicious Danjo Mikoshiba, played by Takashi Kanda (Misumi makes sure to give this creep a particularly grisly comeuppance). 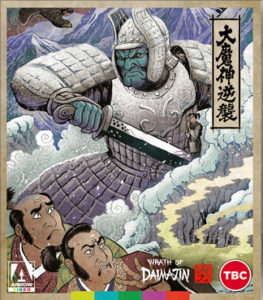 Wrath of Daimajin, the third and last in the series, was released, appropriately, on December 21, 1966. Directed by Kazuo Mori, the film is set in the middle of a winter wonderland and though the mood is positively elegiac, the snowbound mountains have their own share of danger. Bearing the brunt of that threat is a brave quartet of children whose fathers have been kidnapped by a slave driver and forced to work his sulfur pits. Scaling the mountain while avoiding both the tyrant and the sleeping giant at the top of the mountain, the children prove to be a resourceful lot and actually have personalities (some of the characters in the Daimajin films have a cut-and-paste quality). Though the movie’s budget hobbles the fantasy, the snow-covered landscapes have a real charm—some moments appear to be staged inside a Dollar Store snow globe. 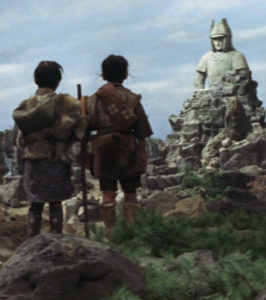 The children succeed in their journey across the giant’s mountain and Daimajin rewards their efforts by decimating the evildoers with his usual footwork—though one wishes he’d simply turned himself into a giant snowball and rolled over the bad guys just to keep with the wintry theme. Though Daimajin vanishes in a flurry of sparkling ice and snow, like James Bond he would be back… 44 years later. The Daimajin series was revived in 2010 on Japanese television with Daimajin Kanon, a long-running drama that took place in contemporary Japan. And Daimajin is hitting the big screen again in Takashi Miike’s The Great Yokai War: Guardians which premieres this month at the Japan Cuts film festival held by the Japan Society in New York City. 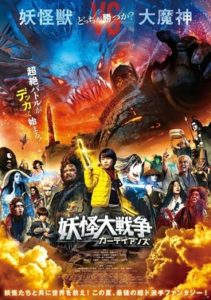 Arrow’s treatment of the Daimajin films couldn’t be bettered. The transfers for all three are very fine, richly colored and sharply detailed. And the company has gone the distance (and then some) with extra added attractions. Highlights include a book with essays from, among others, Jonathan Clements and Keith Aiken, postcards featuring Franks’ illustrations, a brace of commentaries including one from a leading expert on Japanese film, Stuart Galbraith IV, and a near-90 minute interview with the man who framed Daimajin, cinematographer Fujio Morita.

Postcards featuring the original Japanese artwork for all three films

Bringing the Avenging God to Life, a brand new exclusive video essay about the special effects of the Daimajin films by Japanese film historian Ed Godziszewski

Trailers for the original Japanese and US releases

My Summer Holidays with Daimajin, a newly filmed interview with Professor Yoneo Ota, director of the Toy Film Museum, Kyoto Film Art Culture Research Institute, about the production of the Daimajin films at Daiei Kyoto

Trailers for the original Japanese and US releases

Trailers for the original Japanese release