Horror films aren’t only about vampires and goblins — Czech director Juraj Herz’s mind-chilling study of a Fascist opportunist communicates truths about aberrant psychology and Fascists, that audiences would never read in print. A bourgeois burner of cadavers leverages his Reich-useful trade into his own little warped empire of evil. Karl Kopfringl’s modus operandi hardly needs to change, to conform to Nazi standards — the elitist hypocrite already has both his family and employees passively accepting his sick ideas about cremation as the solution to all human ills. Cinematically brilliant, this late picture from the Czech New Wave is one of the best movies ever about conformists, collaborators, and assorted other ghouls. Discouraged by the Production Code, American horror films mostly shied away from truly disturbing material deemed unhealthy or immoral. Although exceptional pictures were made, few if any even began to approach the caliber of foreign horror fare. Yasuzo Masumura’s Japanese shocker Moju expresses the delirium of a ‘morbid ecstasy’ wholly incompatible with our ratings system of 1969. Some would say that its surreal sex fantasy is fundamentally political.

The countries of the Soviet bloc deemed horror pictures a detriment to their social aims. But for political sophistication, one can’t find better films than those of Czechoslovakia’s Prague Spring, made under the ever-present threat of an authoritarian backlash unknown here. Filmed even as Russian tanks were rolling into Prague, Juraj Herz’s The Cremator is an anti-Fascist period picture set during the German takeover of Czechoslovakia in WW2. Anti-Nazi movies usually didn’t get filmmakers in trouble, but any viewer can see that author Ladislv Fuks’s story relates just as well to the Soviet invaders. Like so many films of the Prague Spring, The Cremator was shown abroad for prestige purposes but shelved in its home country. In the extras we discover that it has maintained a very high reputation. 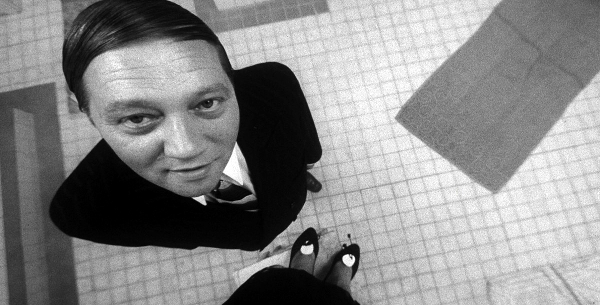 The Cremator’s main titles include cut-out images of nude bodies, very much like the opening title sequence for Moju. But everything that follows is original in style. The movie may be described as a ‘black comedy’ but the tone is deadly serious. Tony Richardson’s The Loved One is a ribald satire, whereas none of the absurdities in Juraj Herz’s picture encourage laughs. Instead, the macabre obsessions and sociopathic politics identify Fascism as a psychological sickness. We shouldn’t be surprised that perverse politics and serial homicide fit together so well.

The Cremator is no dry art film, but quite a singular experience. Its editorial patterns and visual quirks communicate the authors’ intentions extremely well — the film is easy to ‘read.’

In an ordinary horror film Karl Kopfrkingl (Rudolf Hrusínský) would be a dangerous maniac. Instead, he’s a pillar of society, the manager of a large crematorium located next to a cemetery. Karl’s various manias are immediately apparent. He believes in neatness and order but inspires mostly fear and loathing in his lowly employees. He categorizes them — a drunk, a drug addict, etc. Karl’s wife (Vlasta Chramostová) offers only meek smiles, bowing to his petty tyranny but trying to minimize her contact with him. Kopfringl is constantly hanging pictures at home and at work. He claims to be the altruistic type, but he likes pornography and makes creepy advances to his attractive female employees. He takes an offensively paternal attitude toward others but anyone with a brain can intuit that he hasn’t anybody’s best interests in mind.

Although Kopfringl claims he has sex only with his wife, Karl is a steady customer at a brothel (where the prostitute Dagmar is also played by Vlasta Chramostová). He visits his doctor every week to be checked for venereal disease. He also indulges fantasies of divine inspiration — as a Buddhist. Karl mentally remakes the world according to his personal desires, and uses his petty authority to force others to indulge his version of reality.

Kopfringl is always making smug speeches, and when not his voiceovers carry the same message: he’s obsessed with the Beauty of Death and worships cremation as the solution for all problems. He doesn’t talk about burning corpses, but of liberating and cleansing souls. Cremation is the ultimate good — it returns us to the dust we were meant to be. Karl has a disgusting habit of adjusting corpses’ hair, and then using the same comb to comb his own hair. At the fun fair he prefers the horror wax museum to the rides. The proprietor knows a ‘special’ customer when he sees one — he invites Karl to see his special, disturbing ‘cabinet of curiosities.’ 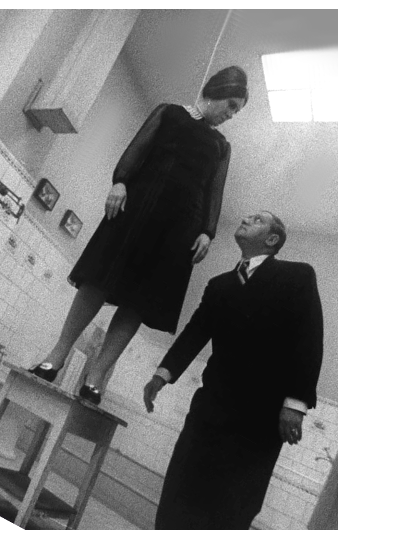 It’s not long before Nazi sympathizers in Karl’s social circle make overtures about joining the party. They find Kopfringl a willing convert. Karl’s embrace of Naziism reflects the madness that overtook Czechoslovakia around the time of the Munich Agreement of 1938, when it became obvious that Germany was expanding in all directions. Before troops arrive, Czech Nazis are already touting their ‘German blood.’ Kopfringl’s new friends assure him that the New Order will need his expertise. Karl visits special ‘Party brothels,’ enjoying his vices but asserting his personal purity; he’s assured that he has nothing to worry about because all of the girls are blondes.

Karl accepts without question that his Jewish and part-Jewish employees will need to be eliminated. Upon hearing that his wife’s part-Jewish blood cannot be allowed to get in the way of his destiny, Karl makes plans to correct the situation.

The Cremator keeps several kinds of Weird cooking simultaneously, creating a truly creepy, disturbed mood. The nervous, feverish cutting puts us on edge right away. The show starts in the middle of a flashback to the zoo, zipping past close-ups of wild animals as Karl describes his bride, who he met at the leopard cage. When not narrating a demented version of reality, Karl lectures people. His wife, children and employees remain silent as he interprets reality from the Kopfrkingl point of view, drifting off into pseudo-aesthetic reveries about classical music, pure souls and the wonder of Death. Distorted fish-eye shots occasionally intrude, along with jump cuts to visualizations of Karl’s disturbing thoughts. As he fantasizes the ‘removal’ of inconvenient people, we see a succession of victims screaming as they fall away into a black void. He imagines himself the reincarnation of the Buddha, replacing the view out a window, with the idealized Lamasery atop a mountain. 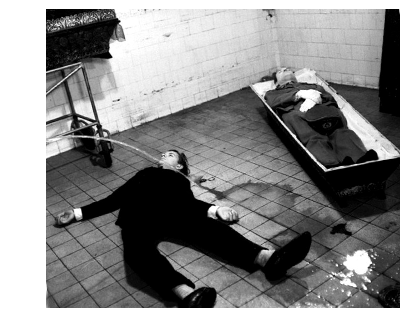 A portrayed by Rudolf Hrusínský, Karl Kopfrkingl wears a constant serene smile that doesn’t quite match his focused eyes. The outwardly calm face masks a thousand hidden thoughts, all of them evil. Karl is careful not to react when he hears that his boy Mili (Milos Vognic) is ‘getting in shape to punch out Nazis.’ He wants everyone around him to remain calm while he makes his plans.

Karl dreams of his important personal role in the glorious New Order, where he will reign over an empire of death. He takes to parting his hair like Hitler. A Nazi official cautiously brings up the subject of research for new uses for crematoriums, only to become concerned when Karl leaps into a diatribe about a noble mission to ‘purify’ entire populations, destroying corrupt bodies so that their souls will be free to ascend to the spiritual plane. He’s all in favor of a Final Solution for anybody, so long as the result is more prestige for himself.

Karl doesn’t have to concern himself with the undesirables on his payroll; cars bearing special agents arrive to spirit them away. But he takes the initiative when it comes time to ‘resolve’ his family issues. With the children off at relatives, he asks his wife to put on her favorite dress, and then to help him do something involving a lamp on the bathroom ceiling. He takes his son Mili on a friendly walk through the cemetery to the crematorium, to show him something special among the coffins in the storeroom. Is Kopfringl really fooling his family, or are they simply conditioned to do what he says, no matter what?

Quite a few striking moments linger in the memory. Zdeněk Liška’s supremely creepy music mixes choral effects suitable for a Passion Play, with weird vibes from a nightmare. In the spooky wax museum, director Herz’s surreal games mix wax figures with actors pretending to be wax figures. In the cemetery, a statue looks just like his son Mili, as if foretelling Mili’s death. A backdrop behind one of Karl’s appalling speeches becomes a mural by Hieronymus Bosch. At key moments a dark haired ‘funeral woman’ shows up in Karl’s thoughts, an Angel of Death.

Director Herz often hangs dialogue from one scene over the next. Karl comments on some vulgar sex thing, and when the scene changes we find out that he’s with his family at Christmas dinner. We don’t assume that he speaks like that in front of his family, but that his weird, perverse vibe is responsible for their hushed, timid attention to everything he says and does. Dispatched to spy on a meeting of Jewish elders, Karl reports that he loved the singing, but adds the exact lies he knows his Nazi associates (his base?) want to hear — that the Jews are plotting to destroy Germany, etc.

According to scholar Daniel Bird, the fantastic runs through all of actor-director Juraj Herz’s films. Among Herz’s other efforts is 1981’s Ferat Vampire which the IMDB describes as being about a car that runs on human blood. At the beginning of his career, Herz served as assistant director on Jan Kadar’s celebrated The Shop on Main Street. The director didn’t consider himself part of the Czech New Wave of the late 1960s. He passed away in 2018

The Criterion Collection’s Blu-ray of The Cremator is a strikingly beautiful 4K digital restoration of this fine picture. The images are precisely attuned to the film’s weird theme; the pervasive feeling of rising Fascism is accomplished with few of the usual Reich images and symbols. Instead, sex, death and Fascism are lumped together in an all-enveloping belief system of ultimate selfishness and hatred.

Disc producer Curtis Tsui has a long record of shepherding Criterion’s horror titles. The extras he’s arranged illuminate every angle of a fascinating film. In a documentary from 2011, director Herz revisits the main crematoriums where he filmed fifty years before — one of them looks like a holy shrine, an occult temple. Irena Kovarová conducts her own analysis of the film; she tell us that Herz’s original ending, no lost, included a modern (1968) epilogue, in which the ultimate conformist Karl Kopfringl is seen alive and smiling as Soviet tanks invade Prague. Also present is an interesting interview with film star Rudolf Hrusínský and his family. (Not long ago I reviewed the excellent 1965 English-Czech 90 Degrees in the Shade, which features Hrusínský in a pivotal role.)

The most intriguing extra is a long documentary from 2017 about composer Zdeněk Liška. Director Herz and filmmakers like Jan Švankmajer and the Quay Brothers participate. The composer of the fascinating music for the Karel Zeman movies and Ikarie XB 1 comes off as brilliant; the docu carries many rare film clips.

The videos wrap up with an HD digital transfer of Juraj Herz’s 1965 debut short film The Junk Shop. An insert folder contains an essay by Jonathan Owen.

Note to Czech-speaking readers: I tried to properly reproduce Czech accents and other diacritical marks, but WordPress tells me that some of them are not supported. A (friendly!) correspondent from Prague once advised that I would be better off just leaving words plain. Moc se omlouvám!